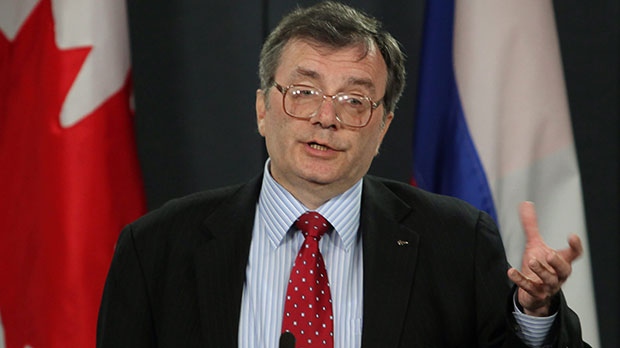 Russian Ambassador to Canada Georgiy Mamedov gestures during a briefing about the upcoming G20 Summit in London, England in Ottawa in this Monday March 30, 2009 file photo. (Fred Chartrand / THE CANADIAN PRESS)

OTTAWA -- Russia's ambassador to Canada says sanctions from the West over the situation unfolding in Ukraine won't isolate his country and expelling it from the G8 would only hurt stability around the world.

"So even if -- and I don't think that western countries are, you know, adventuristic or crazy enough to shoot themselves in the leg and to undercut mutually beneficial energy and other relationship with Russia.

"But even if they did, the longest border in the world that we have is with China, not with Belgium and not with Canada, unfortunately."

Canada joined the United States and other countries in imposing sanctions on Russia as a result of Sunday's vote in Crimea to secede from Ukraine.

Prime Minister Stephen Harper called the outcome of the so-called referendum illegitimate, saying it was conducted under an illegal Russian military occupation.

The prime minister, who is to fly to Kyiv on Friday to show his support for the temporary government of Ukraine, has said the sanctions are aimed at isolating Russia.

But Mamedov shrugged off the sanctions.

"I've been around and you can't isolate Russia," he said.

"Canada has stood with the United States, has stood with all 28 members of the European Union, with Switzerland and others. There was a vote at the UN the other day and on the Security Council -- not one single country voted with Russia," he said.

"Not one single country stood up and voted with the Russian Federation. I think they've got two strong supporters, the Assad government in Damascus and the repressive regime in North Korea, and I think that speaks volumes."

There was some confusion Tuesday over whether Russia would be suspended from the Group of Eight leading industrial countries.

France's Foreign Minister Laurent Fabius told a European radio station that G8 leaders had "decided to suspend Russia's participation." Britain's Foreign Office, meanwhile, said that Russia is still part of the G8, but did not rule out a suspension.

Kicking Russia out of the G8 would do more harm than good, Mamedov said.

"So I don't understand people who say that it is, actually, to hurt Russia," he said.

"It will hurt world stability. It will prevent us from moving on issues that are challenging security of all our countries."

Baird said it will fall to the remaining countries to decide how to proceed, but it remains a possibility.

"I think you'll recall at the last G8 meeting in Northern Ireland, some raised their eyebrows when Prime Minister Harper referred to the G8 as the G7 plus one and I think we see the wisdom of those observations today."

The ambassador spoke for nearly an hour at a news conference that had been called to discuss the recent Olympic and Paralympic Games in Sochi. Cardboard posters with photographs of the Games were mounted on wooden easels around the room, giving it the look of a school science fair.

But it quickly became clear that neither Mamedov nor the many journalists in attendance had any intention of talking about sports.

The ambassador stood at a lone microphone under a crystal chandelier and gave lengthy, folksy answers to questions about the situation in Ukraine and Crimea, Russia's future in the G8, Moscow's ambitions in other parts of the world and the recent stabbing of one of his staff members at an apartment building near the embassy.

That wounded diplomat is now in Moscow recovering from his wounds and isn't expected to return to Canada, Mamedov said.

Canadian officials have said they don't believe the attack was politically motivated, but Mamedov says he has his doubts about that claim. The RCMP has warned him the embassy and its staff are at risk, he added.

Asked if he was satisfied with his employees conduct leading up to the alleged assault, Mamedov took a shot at his host country.

"Next time, I will suggest to my people never to turn their back on a Canadian."