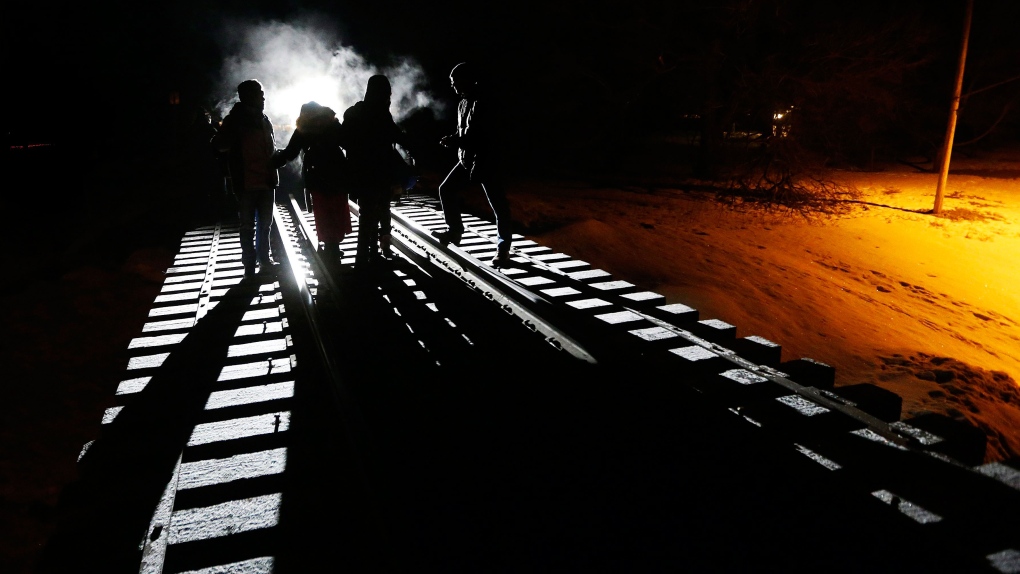 Migrants from Somalia cross into Canada from the United States by walking down a train track into the town of Emerson, Manitoba, where they will seek asylum at the Canada Border Services Agency early Sunday, Feb. 26, 2017. (John Woods/The Canadian Press)

OTTAWA -- A Salvadoran woman and her two daughters who fled their home country after allegedly suffering extortion and rape at the hands of members of the notorious MS-13 gang have launched a legal challenge of the Canada-U.S. Safe Third Country agreement.

The trio came to Canada through the United States in July 2017 in search of refugee protection, but were deemed ineligible under the agreement, which stipulates that asylum seekers must make a refugee claim in the first "safe" country they arrive in.

The woman, whose name is protected by a publication ban, is asking the Federal Court for a judicial review of that decision, fearing that the U.S. will ultimately deport her and her family back to El Salvador, court documents show.

If that happens, she fears further harm and violence from MS-13 gang members in El Salvador.

Amnesty International, the Canadian Council for Refugees and the Canadian Council of Churches -- all longtime critics of the Safe Third Country agreement, or STCA -- are applicants in the case, arguing that the agreement violates certain provisions of Canada's Charter of Rights and Freedoms.

"By returning refugee claimants to the U.S. and exposing them there to a serious risk of arbitrary, lengthy detention and refoulment (deportation), Canada violates their charter rights," the applicants argue in court documents.

"(The woman) and her daughters faced the risks described when they sought entry to Canada as refugee claimants and were refused under the STCA. This same situation is also faced by a great number of other refugee claimants prevented from entering Canada by the STCA."

Hundreds of pages of documents filed in Federal Court detail the woman's case, and include affidavits from refugee law experts, studies, reports and news clippings that detail the escalating risks faced by asylum seekers in the U.S. Many of those risks are the result of executive orders issued by the Trump administration as part of an ongoing effort to crack down on illegal immigrants.

In her affidavit, the woman -- identified only as ABC -- says her family became a target of MS-13 after her husband helped El Salvador police identify a gang member who killed his brother in 1993.

He fled to Canada in 2005, but was denied refugee protection because, as a teenager, he had been associated with a national liberation movement deemed by Canada to be a terrorist organization. He is appealing that decision.

Meanwhile, left alone with her daughters in El Salvador, ABC claims she faced constant threats from gang members demanding to know where her husband was. She alleges they followed her girls home from school on a regular basis and murdered her landlord.

In April 2013, she alleges gang members forced their way into her home, raped and then robbed her, threatening to kill her daughters if she went to police. She claims her youngest daughter was born as a result of the rape.

She finally decided to flee in November 2016 after she alleges gang members pointed a gun at her head and told her she had 24 hours to pay them a sum of money she didn't have.

She took her two youngest daughters, leaving two adult children behind, and embarked on a perilous journey through Mexico to Texas. After staying with family in Mississippi for a few weeks, she eventually tried to enter Canada at an official border crossing between New York and Ontario, hoping to be reunited with her husband, who remains in Canada pending the outcome of his refugee claim appeal.

The woman was told she would be deemed inadmissible, as a result of the Safe Third Country agreement. She returned to the U.S. for a few months to seek legal advice and in July 2015 once again tried to cross the Canada-U.S. border, was deemed inadmissible and filed her legal challenge.

The woman, who along with her daughters has been granted leave to remain in Canada pending the outcome of her challenge, says she has received legal advice saying she would not have a strong refugee claim in the U.S. and is fearful of being deported back to El Salvador.

In its response, the government argues she does not have a case, noting she did not try to seek refugee protection in the U.S., where she would have multiple legal avenues for appeal. The government also refutes the assertion the agreement violates the charter.

A three-day hearing has been scheduled to take place in Toronto beginning next Jan. 21.