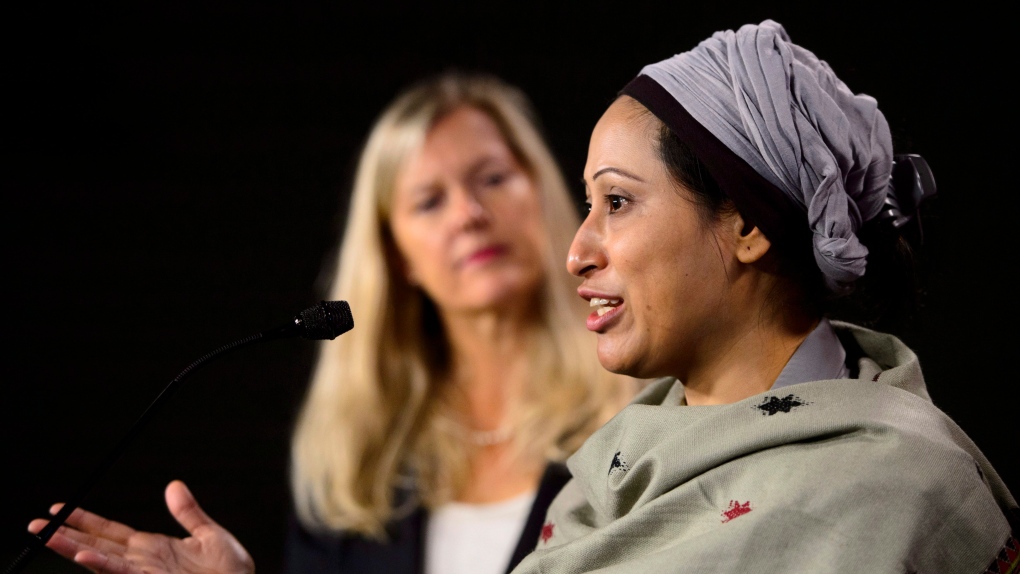 OTTAWA -- Razia Sultana has hope for her people, despite the fact tens of thousands have been tortured and raped in what the United Nations has deemed a genocide.

Sultana is Rohingya. She works as a lawyer and human rights activist in the refugee camps of Bangladesh, where over 725,000 Rohingya Muslims are now staying after fleeing extreme violence from the Myanmar militia.

The vast majority of those in the camps are women and children, many of whom were gang raped and tortured and lost family members in brutal mass slaughters.

But many of them still want to go home to Myanmar.

"They want to go back, because that is their life, their ancestral land. But they need a safe zone," Sultana said.

"Canada is a most powerful country now in the world. They have authority. They can push the Myanmar government (through) international lobbying."

She wants Canada to use its influence to advocate for the creation of a safe zone within Myanmar to allow the women in refugee camps to return without fear of further violence. In the meantime, proper education should be established within the refugee camps to allow children an opportunity for a better future.

Sultana plans to take this message to a meeting of women foreign ministers being held in Montreal on Friday and Saturday.

The meeting will draw together not only 19 female ministers, but also a group of 10 women who have been internationally recognized for their work in furthering human rights causes -- including Sultana. Together, they will discuss international security, feminist foreign policy and aid as well as combating sexual and gender-based violence.

The gathering is timely for people like Sultana who have been working to shine a light on the atrocities suffered by Rohingya refugees.

Earlier this week, the UN human rights council released a comprehensive report on its fact-finding mission on three states in Myanmar.

The 440-page report documents, in graphic detail, the systematic targeting of civilian Rohingya by the military, including mass gang rape, sexual slavery and the razing of hundreds of villages.

The report calls for Myanmar's military leaders to be investigated and prosecuted for genocide and war crimes.

Canada has condemned the violence and committed $300-million over the next three years to support displaced and other vulnerable populations.

There have been calls for the Trudeau government to revoke an honorary Canadian citizenship given to Myanmar's de facto leader, Aung San Suu Kyi, in 2007, but the government has so far refused to state whether it is considering this measure.

Freeland's office says the new UN report's findings offer further evidence of crimes against humanity and ethnic cleansing in the Rakhine State, with the use of sexual violence as a tactic of war by Myanmar's security forces being "particularly unacceptable."

"The fact-finding mission concluded that the evidence gathered is sufficient to warrant an investigation into senior officials' complicity in genocide. We agree," said Freeland's press secretary, Adam Austen.

"Canada will continue to work closely with other states, international organizations and partners to hold those responsible of such international crimes to account, including through the establishment of an international accountability mechanism."

Canadian officials will discuss such mechanisms -- such as a dedicated tribunal for investigating and prosecuting war crimes --next week at the UN General Assembly in New York.

Meanwhile, Sultana hopes the women foreign ministers summit this week will offer an opportunity to encourage Canada to take a larger role in ending violence against her people -- specifically through economic sanctions against countries providing arms and training to the Myanmar military.

"We appreciate the economic (help). They are the biggest funder, giving support to refugees," she said of Canada.

"But they should be involved in the political matter also. They have to put pressure on the international community to stop these investments and support for the Myanmar army."

Rachel Vincent, director of advocacy and media with the Nobel Women's Initiative, says she was glad the Canadian government invited women like Sultana working at the grassroots level on women's rights and security to be part of the women foreign ministers meetings this week.

These activists are able to offer an important glimpse into the real-life impacts that global conflicts are having on women around the world, Vincent said.

She said many women working in advocacy organizations face threats of violence and retribution as well as regular online abuse as a result of pushing against governments and institutions that have marginalized or victimized women.