Rob Ford, the former Toronto mayor whose brash political style and admission he smoked crack cocaine while in office made headlines around the world, has died. He was 46.

Ford, who was first diagnosed with a rare form of cancer in September 2014, died in Toronto on Tuesday, his family confirmed in a statement: 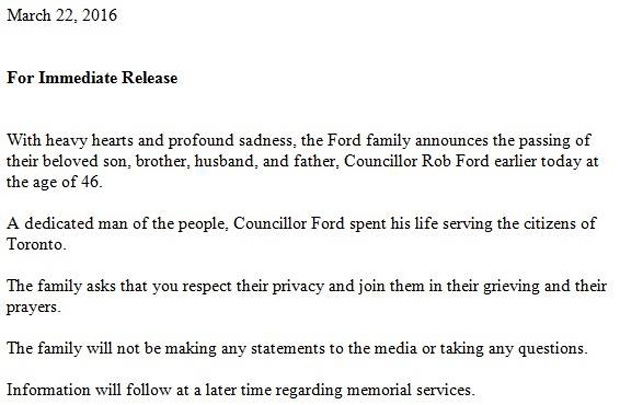 Following news of Ford’s death, colleagues and politicians from all levels of government issued statements expressing their condolences for Ford, who was serving as a city councillor at the time of his death.

Toronto Mayor John Tory said the city is “reeling” with the news of Ford’s death, and offered condolences to family.

Tory said Ford’s time at city hall “included moments of kindness, of generosity to his council colleagues and real efforts to do what he thought was best for Toronto. He was, above all else, a profoundly human guy whose presence in our city will be missed.

Speaking on Parliament Hill, Prime Minister Justin Trudeau acknowledged Ford’s passing at “the too young age of 46 years,” and said his “heart goes out” to Ford’s wife Renata and their two children.

“Our thoughts are with the entire Ford family at this difficult time,” Trudeau added.

Ontario Premier Kathleen Wynne expressed sadness on the loss, and that on behalf of the Ontario government, her “thoughts and prayers” were with Ford’s friends, family and colleagues.

At Toronto City Hall, a flag was lowered to half-mast in tribute to Ford.

Ford began his political career as a straight-talking, right-wing city councillor focused on stopping the fiscal "gravy train" and ended it known to millions around the world as the "crack-smoking Canadian mayor."

Less than two months before the mayoral election Ford was hoping would see him serve a second term in office, he was diagnosed with malignant liposarcoma in September, 2014.

The rare type of cancer, which arises in soft tissue structures, was found in Ford's abdomen. He withdrew his bid for re-election in the mayoral race and underwent several rounds of chemotherapy and radiation. But he refused to let cancer force him out of politics altogether. In between chemo treatments, he campaigned to reclaim his old council seat and handily won.

He underwent surgery in May 2015, to remove what was left of the tumour.

In October of that year, Ford announced that doctors had found another tumour near his bladder. He underwent further treatments, but they were unsuccessful.

Ford leaves behind his wife, Renata, and their two young children, Stephanie and Douglas. He is also survived by his brothers Doug and Randy, sister Kathy and mother Diane.

Before he was elected mayor of Toronto in 2010, Ford was a much-loved Etobicoke North Ward 2 councillor for 10 years.

He was very popular with residents in the area, and regularly surpassed other candidates by a wide margin.

Still, Ford's resounding election-night victory in 2010 was a shock to his critics, who saw him as a buffoonish character with a checkered past, including a drunk driving conviction in Florida.

But Ford's populist approach and promise to "stop the gravy train" at city hall resonated with voters.

Despite controversies that dogged him as a councillor -- including his refusal to apologize for saying that "Oriental people work like dogs" -- he was still known for personally returning his constituents' calls about potholes and crumbling sidewalks. He survived a conflict of interest lawsuit that threatened to remove him from office, as "Ford Nation" -- the name given to his most dedicated supporters -- continued to grow.

Ford continued his hands-on approach as mayor, and that included regularly giving out his personal number to constituents. He also continued to coach a high school football team, and often explained his absences from council meetings and other official duties as time spent with his constituents or players.

But three years into his term, the spotlight began to shine on Ford's substance abuse.

In October 2013, The Toronto Star and U.S. website Gawker reported that a man in Toronto was shopping around a video of Ford smoking crack. Reporters from both outlets viewed the video and said it clearly showed Ford smoking from a glass pipe.

Ford initially denied that such a video existed, but, after a month of international media frenzy, he admitted that he had smoked crack cocaine.

"Have I tried it? Probably in one of my drunken stupors," he said, denying that he was an addict.

Ford refused to step down, but Toronto city council voted to strip him of most of his powers - a move he dismissed as "nothing more than a coup d'etat."

Court documents also revealed that Ford and the so-called "crack video" were the subject of a months-long Toronto police investigation.

Ford was never charged with any crimes. His friend and occasional driver, Sandro Lisi, was charged with extortion for allegedly trying to retrieve the video, but has yet to stand trial in that case.

The scandal made Rob Ford a regular punchline on late-night talk shows in the U.S. At one point, he even made an appearance on Jimmy Kimmel Live,  where he was mocked by the host.

After a second video of Ford smoking what appeared to be crack emerged in 2014, he acknowledged his struggles with addiction, took a leave of absence, and went to rehab.

“It was difficult for him, as I think it is for most people, to recognize some of the traits that they possess and don’t want to acknowledge, but in the end, he did,” Kelly told reporters at Toronto City Hall. “And I commend him for that. And for the effort he made to re-orient his life, not only on his behalf, but on behalf of his family."

Journalist Robyn Doolittle, who covered Ford’s personal and political life extensively and wrote “Crazy Town: The Rob Ford Story,” said that the world knew Ford when he was embroiled in scandals, but that his popularity among Toronto voters stemmed from his work in “regular” situations.

“He was a really likable, charming guy … when he was just interacting with his constituents or Torontonians and that is what made him able to survive some of the troubles in his later career,” said Doolittle. “Because he built up all this goodwill.”

Mark Towhey, Ford’s former chief of staff, said that his boss was “very much in love with democracy, and representing” all residents.

Towhey said that Ford was often criticized for being a mayor who didn’t care about “big-picture” items.

“Really, he cared more about the 2.8 million little pictures, and that each and every resident that reached out for help, got some help,” Towhey said. “And so, in that way, he was pretty transparent, that’s what he spoke about publicly, that’s what he believed passionately.”

Ford grew up in a Conservative family in the western Toronto suburb of Etobicoke. He was the youngest child of millionaire business owner and former Progressive Conservative MPP Doug Ford Sr., who died of colon cancer in 2006.

The Ford family made its fortune with Deco Labels and Tags, an Etobicoke-based business. Growing up, Rob Ford dreamed of a career in football, but even though he made the football team at Carleton University in Ottawa, he quit his post-secondary education after one year and started working at Deco.

Ford parlayed his passion for football into coaching, and he took great pride in working with young athletes from disadvantaged backgrounds. When he was dismissed from his long-time football coaching duties at the Don Bosco Catholic Secondary School in Etobicoke, it came as a huge personal blow.

Both Rob and Doug Ford had ambitions beyond the family business. When Rob was elected mayor in 2010, Doug won his younger brother's Ward 2 council seat.

The brothers stuck together at city hall, often clashing with other councillors and voting against what they perceived to be frivolous spending of taxpayer dollars. On some proposals, such as building a new practice facility for the Toronto Raptors, the brothers cast the only "no" votes.

Outside city hall, the Ford brothers had another public platform - a Sunday afternoon radio talk show that ended at the height of the crack video controversy.

Doug played the role of Rob's sidekick and defender, but many believed that he was behind a number of key decisions that ostensibly came from the mayor's office. As the crack video scandal unfolded, Doug often spoke to the media on his brother's behalf, and he continued to do so once Ford fell ill.

So it was no surprise when Doug Ford announced 'that he would take his cancer-stricken brothers place in the 2014 mayoral race. Doug had hoped that the Ford name would carry his last-minute campaign, but he failed to drum up the kind of support Rob enjoyed, even in the worst of times.

"If you know anything about the Ford family, it's that we never, ever, ever give up," Rob Ford said after Doug lost the election to John Tory.

Journalist Robyn Doolittle, who covered Ford’s personal and political life extensively and wrote “Crazy Town: The Rob Ford Story,” said that the world knew Ford when he was embroiled in scandals, but that his popularity among Toronto voters stemmed from his work in “regular” situations.

“He was a really likable, charming guy … when he was just interacting with his constituents or Torontonians and that is what made him able to survive some of the troubles in his later career,” said Doolittle. “Because he built up all this goodwill. He really just seemed so invested in his job and seemed to love the city and the work that he was doing, and people saw that.

“They felt he was authentic.”

Although his family remains involved in politics, Doolittle said it’s unlikely Toronto will ever see another politician like Ford.

“That blend of populism and controversy and also likability is something that I don’t think anybody will be able to replicate.”

With files from Karolyn Coorsh