Review of federal fossil fuel subsidies appears to be behind schedule 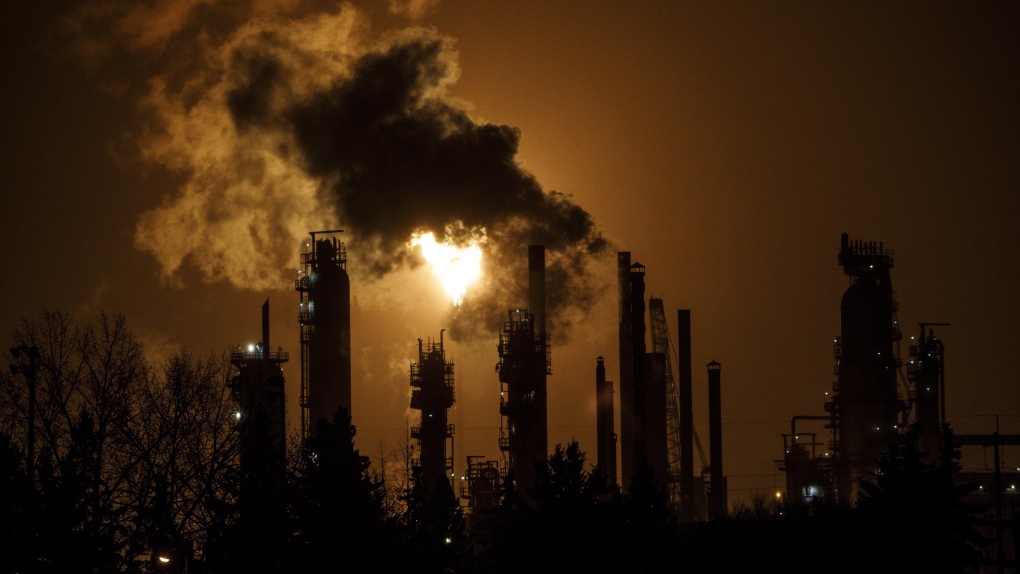 A flare stack lights the sky from the Imperial Oil refinery in Edmonton on December 28, 2018. (THE CANADIAN PRESS/Jason Franson)

OTTAWA -- Canada's promise to produce an inventory of its fossil fuel subsidies as part of a joint peer review with Argentina appears to be off schedule and may not deliver results until 2021, an environmental advocate says.

The peer review, which launched in June 2018 as part of a G20 commitment to eliminate all "inefficient" subsides to the fossil fuel sector, never had a specific deadline but was expected to take about two years.

A Finance Canada spokeswoman this week would not give any detail on the status of the review, saying only that it was "underway" and would be made public when completed.

Julia Levin, the climate and energy program manager for Environmental Defence, said she has been told by government officials that they think it probably won't be finished until sometime in 2021.

"That's just too slow," said Levin. "We have seen no evidence that the government is really making this a priority."

Similar peer reviews undertaken between the United States and China, Germany and Mexico, and Italy and Indonesia took between 12 and 24 months.

A 2021 completion date would leave Canada with less than four years to hit Prime Minister Justin Trudeau's promise of phasing out all "inefficient" subsidies to the fossil fuel sector by 2025. The peer review is seen as a critical part of the process because there is no consensus in Canada between politicians, environment experts and the energy industry about what "inefficient" means or what constitutes a subsidy.

Earlier this year, Environment Canada released a discussion document for the peer review that found just four non-tax measures that might be considered a subsidy, but none were inefficient. The measures included aid to lower the cost of diesel for northern communities and funds to help oil companies reduce their own carbon footprint.

Finance Canada is supposed to be producing a similar document on tax measures, but the department would not say if that document is finished.

On the other hand, Tim McMillan, president of the Canadian Association of Petroleum Producers, said Canada has no subsidies for producing fossil fuels. Tax measures available to all companies are not subsidies, he said, adding that the industry is one of the most heavily taxed.

CAPP intends to launch a campaign to counter the political rhetoric that fossil fuel producers are constantly being given handouts.

The International Institute for Sustainable Development says that in the 2017-2018 fiscal year, various federal programs offered more than $121 million in direct aid to oil and gas companies for everything from natural gas refuelling stations, to help building carbon capture and storage.

In the last year, the government has added aid programs to help the oil and gas industry diversify and expand, including $1.6 billion last December to diversify export markets and $220 million this past June to help LNG Canada buy fuel-efficient gas power turbines for its planned facility in British Columbia.

Levin said the $4.5 billion purchase of the Trans Mountain pipeline could also be viewed as a subsidy.

Levin said the government must become more transparent about funds flowing to oil companies, including how much they get from tax measures like science and technology credits. (The industry argues those are not subsidies, and the government appears to agree, but environment groups say any money helping oil companies produce oil more cheaply conflicts with the government's tax on pollution on the other end.)

"The industry would like this spending to remain cloaked and so far it is despite government commitments about increased transparency," said Levin.

The auditor general chastised the Liberals in 2017 for refusing to hand over documents that would help assess the status of the promise to phase the subsidies out. Environment commissioner Julie Gelfand accessed most of those documents earlier this year and concluded Finance Canada and Environment Canada defined "inefficient" too broadly, focused too much on fiscal considerations and not enough on social and environmental issues, and were not looking at every government department and agency.