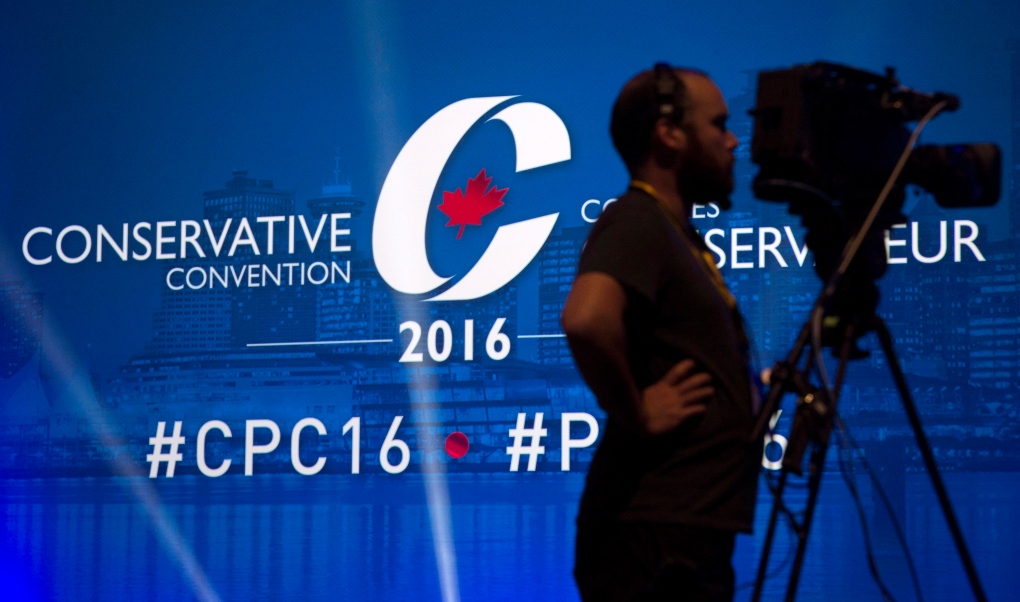 A television cameraman sets up at the Conservative Party of Canada convention in Vancouver, Thursday, May 26, 2016. (Jonathan Hayward / THE CANADIAN PRESS)

OTTAWA -- The list of candidates for Conservative leadership is broadening beyond current and former MPs with the entrance of a Toronto communications consultant who says she believes an outside perspective is badly needed.

Adrienne Snow opened a fundraising drive this week to raise the $100,000 required to register for the leadership contest, making her the second woman to join the race.

The first was current MP Kellie Leitch. MP Lisa Raitt is expected to announce her own bid next month.

Snow, 49, said while it's important to have women running, the race also needs Conservatives who have no association with former leader Stephen Harper. So far, nearly every contender is a current or former MP.

"I really think the presence of at least one outside candidate is important for the race," she said.

"I think it's important for the party to look that it's refreshing itself and welcoming new ideas and I think I can contribute that, so that was the main draw for me."

She also hopes geography will be her strength.

"I think I'm the only candidate from within the city of Toronto proper and that has traditionally been something for which we've been criticized - not enough thought about Toronto and urban areas and I hope to lend some weight there."

Snow has never sought elected office, though she has worked as a campaign volunteer and served on the boards of Conservative electoral district associations federally and provincially.

She said she was fluent in French in university and is working now on getting that fluency back.

O'Leary has also said he might consider instead throwing his influence behind another candidate; this week, he declared he'll help Jason Kenney, the current federal Tory MP seeking to lead provincial conservatives in Alberta.

Snow has a Kenney connection too -- between 1997 and 2000 she served as the director of policy for the National Foundation for Family Research and Education, a think tank often listed in Kenney's bio as one of the organizations he's worked with in the past.

The foundation, now defunct, spoke out in the 1990s against issues such as allowing same-sex couples to foster children. Its research suggesting children in day care didn't fare as well as those who stay at home was regularly cited during debates in that decade about child care.

When asked whether she identifies as a social conservative, Snow said she's a conservative because of fiscal policy, but sides with social conservatives in their opposition to the legalization of marijuana. Same-sex marriage and assisted suicide have been settled, she said.

Snow also served as the executive director of the Centre for the Study of Civic Renewal, under whose banner she published several op-eds, including a look in 2001 at the problems plaguing efforts at the time to unite the right in Canada. The issue was the difference between the Canadian Alliance's and Progressive Conservatives' approach to governance, she wrote.

A balance between embracing populism and working within the existing system is necessary, she wrote.