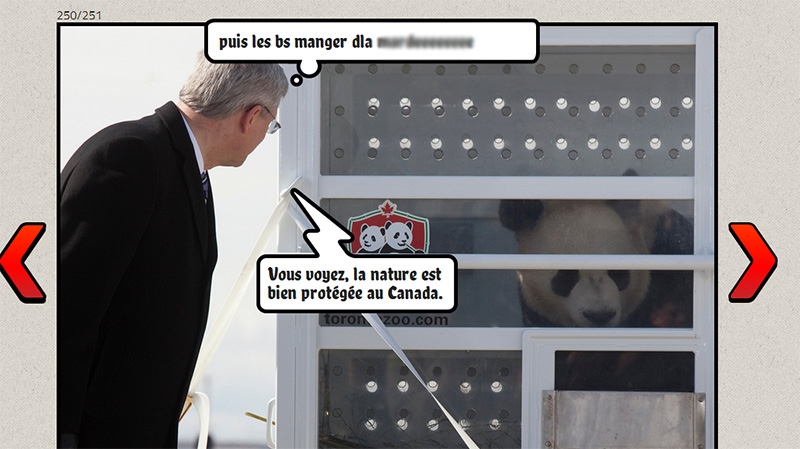 One of the user-generated captions on the 'Harper Says' interactive website is shown on Thursday, April 11, 2013.

The Public Service Alliance of Canada is apologizing for offensive comments posted on its interactive website urging Canadians to write their own captions for photos of Prime Minister Stephen Harper.

Some of the captions written by users of the ‘Harper Says’ website were racist, while others attacked the prime minister’s family members.

The Public Service Alliance of Canada apologized for the site late Thursday afternoon.

“The PSAC would like to apologize for the offence created by comments posted anonymously to its recently launched website,” harper-says.ca, it said in a statement.

“The union has taken down the website in its entirety pending a review of its moderation capacity. The comments were contrary to PSAC policy and contravened values that Canadians hold dear. The union has no desire to convey childish or hateful messages to the public, or its members.”

The harperhatesme.ca website is still up, featuring ads about the effects of cutbacks in aviation safety, food inspection and other areas.

In response to Thursday’s controversy, Harper’s spokesperson Andrew MacDougall tweeted: “re: PSAC: the Prime Minister thanks the members of the public service for the work they do each day on behalf of Canadians.”