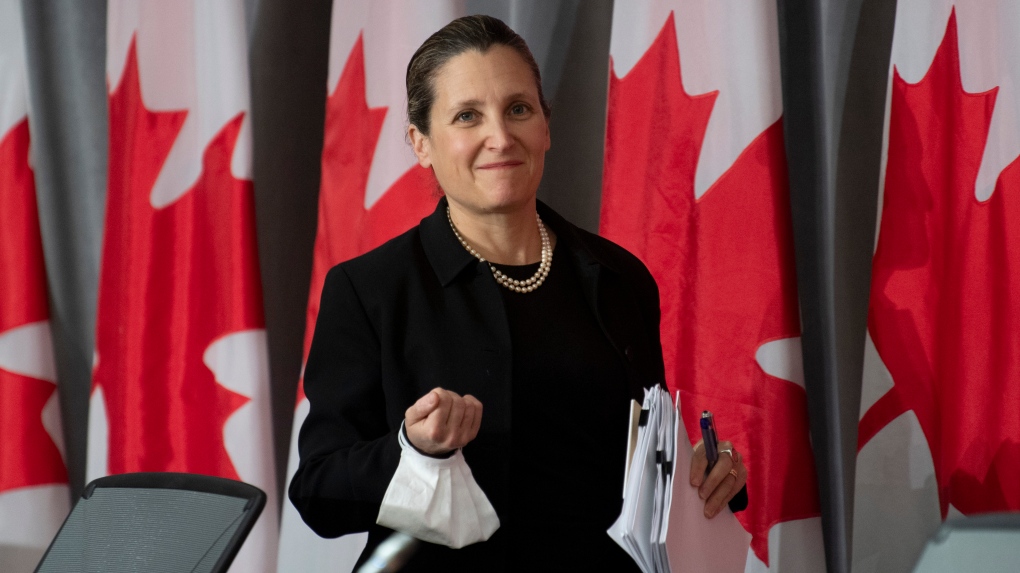 Deputy Prime Minister and Minister of Intergovernmental Affairs Chrystia Freeland wears her mask on her wrist as she arrives at a news conference Tuesday June 9, 2020 in Ottawa. THE CANADIAN PRESS/Adrian Wyld

The planned increase on Jan. 1 is part of a multi-year plan approved by provinces and the federal government four years ago to boost retirement benefits through the public plan by increasing contributions over time.

The first premium bump was in 2019, another was earlier this year and the next is due at the beginning of 2021.

A number of provincial finance ministers on a recent call with Freeland asked her to put a pause on next year's automatic increase because of the COVID-19 pandemic.

They argued it isn't a wise economic decision to take more off workers' paycheques and to charge businesses more when many are still struggling.

The details are in a letter Saskatchewan Finance Minister Donna Harpauer sent Freeland two days ago, a copy of which was obtained by The Canadian Press.

Harpauer's office confirmed the authenticity of the letter, and that her provincial counterparts raised the issue during a Nov. 20 teleconference with Freeland.

Any changes to contribution rates or the earnings ceiling at which point contributions top-out would need the approval of Parliament and seven provinces representing at least two-thirds of the national population -- a higher bar than what's required to amend the Constitution.

Freeland is to deliver an economic update on Monday that should provide a full accounting of all federal spending on the COVID-19 pandemic to date.

The document will also detail the depth of the deficit this year, last estimated in July at $343.2 billion, and is expected to outline some new spending.

In her letter, Harpauer asked Freeland to use the document to announce a delay in any CPP contribution increases until at least 2022, when the country hopes to see "a recovery from our current economic difficulties."

"Our governments have provided a number of direct and indirect supports to businesses and workers to help sustain them through the current COVID-based economic downturn," Harpauer wrote.

"I believe that increasing CPP contribution rates at this time would be counterproductive to our many efforts over the past eight months."

A spokeswoman for Freeland said freezing the increases negotiated in 2016 would mean reducing future benefits for Canada's current workers.

"The federal government's top priority is supporting Canadians and businesses, very much including in Saskatchewan, as the country weathers the COVID-19 pandemic," Katherine Cuplinskas said. "With a second wave underway, many people in Saskatchewan and across Canada continue to face immense uncertainty."

Groups representing businesses big and large, and the workers they employ, say they are looking for some reshaping of federal aid programs.

Perrin Beatty, president of the Canadian Chamber of Commerce, said the government needs to put sectors that rely on a physical presence for their operations at the centre of any economic plan, through targeted emergency supports.

The National Airlines Council of Canada made a plea for aid on Thursday, noting newly released figures from Statistics Canada showing passenger counts continue to be down by more than 80 per cent.

Robert Asselin, senior vice-present for policy at the Business Council of Canada, said targeted aid for airlines has been slow to land compared to in other countries. The council, which represents large employers in the country, will be looking for clarity on targeted aid in Monday's update, he said.

Hassan Yussuff, president of the Canadian Labour Congress, said many workers using emergency benefits are worried about maxing out early in 2021. He said the government may want to use Monday's update to signal an extension, beyond 26 weeks, of how long someone can claim the new benefits.

"There is going to be a need for them to look at extending the benefit period because I think Canadians are going to need it for a little longer until we can start getting a (COVID-19) vaccine," Yussuff said.

Small businesses are also looking for any extra help the government can provide beyond a reprieve from CPP premium increases.

Dan Kelly, president of the Canadian Federation of Independent Business, said about one-third of small businesses are losing money even though they're open.

"The government does need to keep its focus very squarely on getting us through COVID and ensuring that there are sufficient economic supports in place," he said.