Provinces asking for more COVID-19 aid will be more 'compelling' once $19B spent: LeBlanc 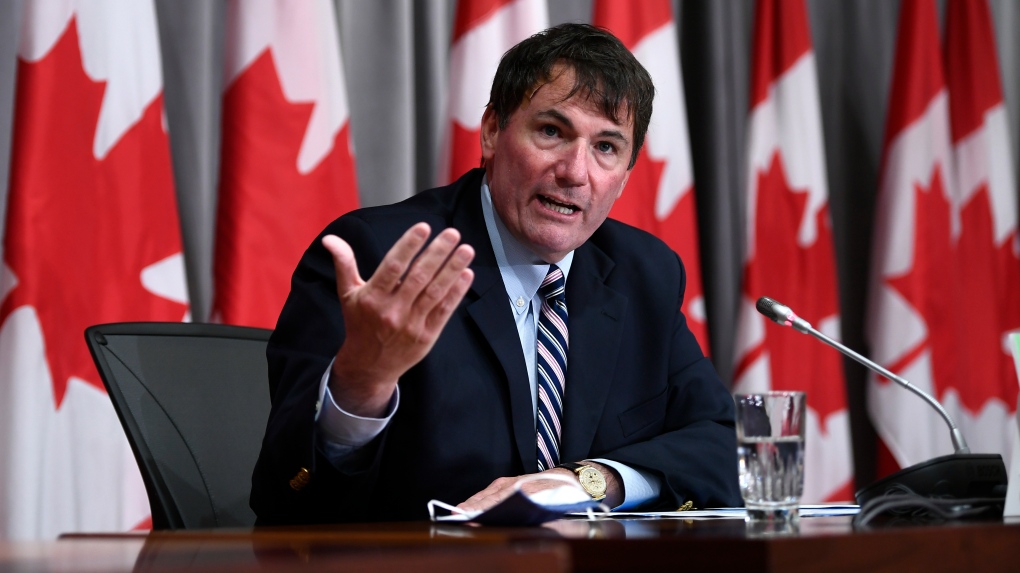 Minister of Intergovernmental Affairs Dominic LeBlanc speaks during a news conference on Parliament Hill, on Friday, Sept. 18, 2020, after a group of premiers gathered in Ottawa to discuss health care spending. THE CANADIAN PRESS/Justin Tang

OTTAWA -- Intergovernmental Affairs Minister Dominic LeBlanc says the federal government is willing to dish out new funding to the provinces and territories to combat the surging second wave of COVID-19 infections, but that the request would be more “compelling” if premiers can demonstrate they’ve burned through the $19 billion already provided and divided up between them.

In an interview on CTV’s Question Period, LeBlanc said that he has confidence the provinces are doing what they need to do to stock up on personal protective equipment and test kits with the “safe restart” funding agreed to in July.

But that, given the second wave is proving a significant challenge that’s forcing more shutdowns and taxing the health-care system, LeBlanc said the federal government is open to spending more if it’s required to keep Canadians safe.

“The numbers that we're seeing, the number of cases is obviously extremely worrisome, and if provinces and territories came to us and said ‘look, here's how we spent that money, it met the need at the moment, but the need is continuing or is expected to be greater,’ would we have a conversation with them about how we could support them going forward? The answer is of course we would,” LeBlanc said. “But it's less compelling if they come to us for more money and… they haven't already spent the money we've allocated.”

Prime Minister Justin Trudeau has agreed to a federal-provincial meeting in December to discuss the provinces’ request for a long-term multi-billion increase to transfer payments over the next decade.

In a separate interview on CTV's Question Period, Manitoba Premier Brian Pallister said the federal government needs to "step up."

“The federal government needs to step up... and strengthen its contributions to health care generally. This was before COVID… We have the lowest level of federal support for health care since the Canada Health Act came in, at a time when our population is aging dramatically… we need that discussion to happe," Pallister said.

“Those resources that every province has are limited. And, of course, we need the federal government to get back to being a strong partner in health care funding as opposed to the mini partner that it's become.”

LeBlanc also weighed in on B.C. Premier John Horgan’s call this week for the federal government to discourage Canada-wide travel given the spike in cases in many regions.

Horgan has specifically asked for the establishment of "a pan-Canadian approach to travel" that ensures "people in Coquitlam are living under the same rules as people in Chicoutimi.

LeBlanc said that Horgan is right about limiting travel, however don’t expect a formal federal order to that effect, with Prime Minister Justin Trudeau signaling on Friday that he still thinks each province is able to make their own decisions about the right restrictions for their residents.

“Premier Horgan is correctly identifying an important need to reduce all of that non-essential travel, we agree with him entirely in that regard,” LeBlanc said. “It's not helpful for people in the coming weeks to plan to travel interprovincially, or outside their city, or frankly outside their house.”

The latest federal modelling is forecasting that if people see more people regularly than they currently are, the country could be reporting 60,000 new cases daily, and even under current rates the country is on track for 20,000 cases a day, putting great pressure on Canada’s hospitals and other health services.

LeBlanc said planning is underway for these “contingencies,” and talks continue daily about ensuring there are stockpiles of personal protective equipment ready as well as other life-saving supplies like ventilators.