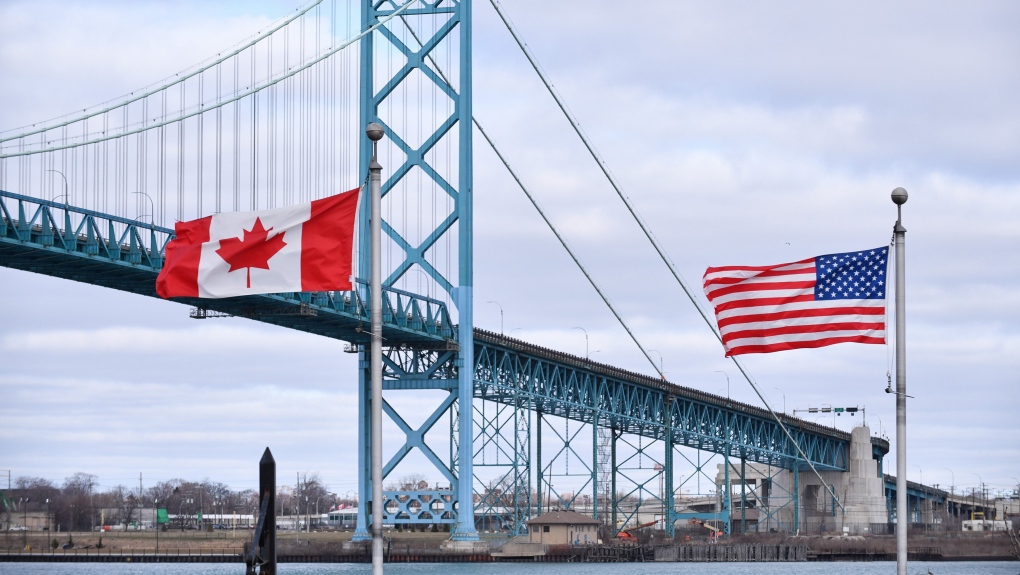 Canadian and American flags fly near the Ambassador Bridge at the Canada-USA border crossing in Windsor, Ont. on Saturday, March 21, 2020. THE CANADIAN PRESS/Rob Gurdebeke

The details came after MPs at the House of Commons immigration committee were told by departmental officials that 1,300 national interest exemptions had been issued.

Immigration Minister Marco Mendicino's office was forced to clarify late Wednesday the details of the national interest exemptions he's authorized after the number surfaced at a House of Commons immigration committee hearing earlier in the day.

Mendicino was grilled on how many people had been allowed into Canada using the exemption, which admits those who don't qualify under current COVID-19 related restrictions, or to skip the mandatory 14 day quarantine when they arrive.

Who has access to that program has been a source of public debate, especially throughout the summer and fall as thousands of families placed sustained public pressure on Mendicino to loosen the border restrictions to allow more families to reunite.

When asked Wednesday by Conservative MP Raquel Dancho how many exemptions he had authorized, Mendicino deferred to his departmental officials, who told the committee 1,300 were granted.

His office later said the official "misspoke" and the figure reflects the 1,354 people covered by four national interest exemptions Mendicino approved: two for the National Hockey League (one for players, the second for team officials,) one for pre-season training for Major League Baseball, and one for Major League Soccer.

They were all exempt from quarantine because their leagues had COVID-19 mitigation plans cleared by public health.

How the exemptions have been used is one of several issues being raised as MPs examine the effects the COVID-19 pandemic has had on the immigration system.

The initial border closure rules meant that only essential workers and a very limited list of family members of citizens of permanent residents could enter Canada.

Families members not covered by those exemptions, including adult children, common-law spouses, grandparents and siblings became increasingly vocal about being shut out, noting there wasn't enough freedom given even for compassionate cases, such as family members being near death.

Mendicino relented in October, launched a new program to facilitate entry for more family members, and a compassionate program, and later pledged applications would be decided upon 14 days.

Opposition MPs pressed him Wednesday on that commitment, with both the NDP and Conservatives saying they were aware of many people who were not receiving decisions by that deadline, nor any guidance from the department on when they might.

His office said later that out of 29,000 requests, 19,000 have been decided upon so far. About 80 per cent have been completed within the promised 14 days, with the remainder applications that are incomplete or have other issues.

Processing time is currently around 11 days, and an additional team of 30 staff were added to the program last week.