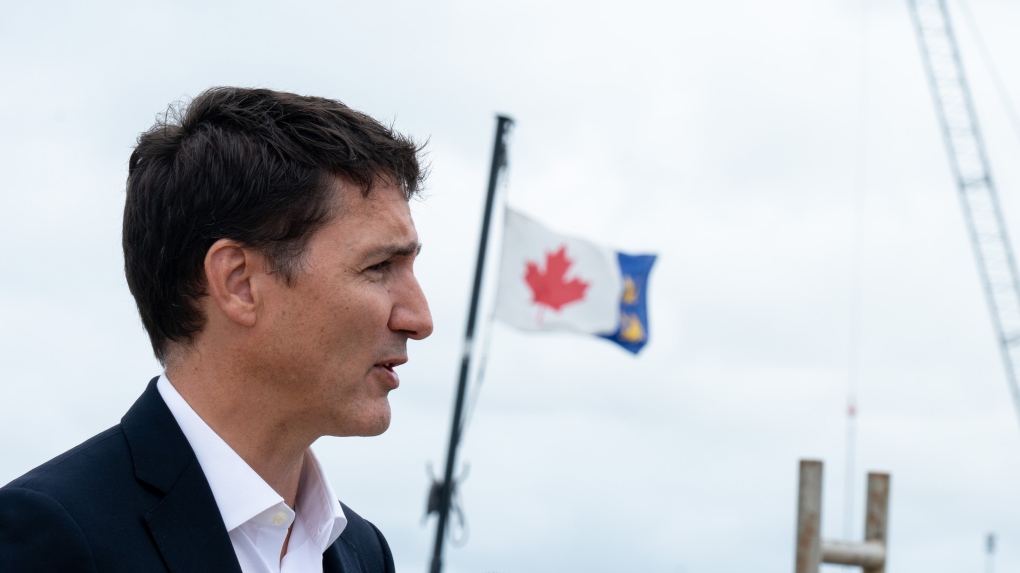 Prime Minister Justin Trudeau speaks during a visit to Les Îles-de-la-Madeleine, Que., Friday, Aug. 19, 2022. New census data showing a decline in French in Canada is "extremely troubling," the prime minister said, but he added that Ottawa still has a responsibility to protect linguistic minorities across the country — including in Quebec. THE CANADIAN PRESS/Nigel Quinn
CAP-AUX-MEULES -

New census data showing a decline of French in Canada is "extremely troubling," the prime minister said Friday, but he added that Ottawa still has a responsibility to protect linguistic minorities across the country -- including in Quebec.

During a visit to Les Iles-de-la-Madeleine, Que., Trudeau reacted to data released this week indicating that the proportion of Canadians who speak mainly French at home has dropped in nearly all provinces and territories. In Quebec, the percentage of people who primarily speak French at home fell to 77.5 per cent in 2021 from 82.3 per cent 20 years earlier.

Trudeau said that while the data is shocking, "we could see this coming over the past number of years."

"The numbers that recently came out are extremely troubling and worrisome but not entirely a surprise," Trudeau said in Cap-aux-Meules, Que., where he made an infrastructure announcement.

That's why, he said, the federal government tabled a bill earlier this year to increase the use of French in federally regulated private businesses. He said the government's proposed modernization of the Official Languages Act also acknowledges Ottawa's responsibility to protect French even in Quebec, which he said previous federal governments have not done.

That bill, however, allows federally regulated companies to opt out of being subject to Quebec's strict language charter. The federal government has also not excluded joining an eventual court challenge to Quebec's recently adopted language reform, known as Bill 96.

Bill 96 extends strict French-language rules for businesses, requires immigrants six months after they arrive in Quebec to communicate with the government in French only, and caps enrolment at English-language junior colleges.

Trudeau said that while the federal government is committed to protecting the French language in Quebec, it is also dedicated to ensuring linguistic minorities across the country have their rights respected. The protections that English speakers enjoy in Quebec also safeguard the rights of francophones elsewhere in Canada, he added.

"There are things that could happen if you're protecting French in Quebec in certain ways that could have a negative impact on francophone communities outside Quebec," he said without giving details.

"We will continue to always stand up for official language minorities," Trudeau said, adding that doing so is "not something that Quebec is focused on."

Trudeau visited Les Iles-de-la-Madeleine, a small archipelago in the Gulf of St-Lawrence, to announce a $40-million investment over four years to demolish and rebuild a wharf at one of the island's ports.

He said the wharf at the Cap-aux-Meules port is key to the local fishing industry, which is a major employer. Inspection reports have shown that the 50-year-old wharf is deteriorating, forcing Transport Canada to implement restrictions on use of the wharf and install an additional temporary structure.

National Revenue Minister Diane Lebouthillier, the MP for the area, said Trudeau's visit was the first official foray to the islands by a sitting prime minister in more than 50 years. The last one to visit was Pierre Elliott Trudeau -- the current prime minister's father -- who came in 1970 to announce the construction of the port.

This report by The Canadian Press was first published Aug. 19, 2022.