OTTAWA -- Canadian veterinarians are pushing for warning labels on marijuana to tell owners it can be toxic to pets, as the Oct. 17 legalization approaches.

The Canadian Veterinary Medical Association has been asking the federal government to require the warning labels since it sent a letter to Health Canada last January outlining its concern. Representatives have continued to meet with departmental officials to pursue the subject.

"In the United States where some states have legalized cannabis, there has been a significant rise in reports of ingestion and toxicity in animals, particularly dogs," then-CVMA president Troye McPherson wrote in the January letter.

Animals can ingest cannabis in a variety of ways, including by rooting edibles out of the garbage, scavenging roaches -- the butts of marijuana cigarettes -- or licking up bong water.

Mike Knippel's dog Hilo suffered from marijuana toxicity a few months ago. He's not sure how the dog got ahold of it, but suspects he ate a cannabis product while he was out for a walk in an off-leash dog park.

Knippel and his wife didn't know at first what was wrong with their dog, who was walking slowly despite normally being a high-energy pup.

"He was unsteady on his feet," Knippel said in an interview with CTV News. "It looked like he was going to tip over. His head shied away from our hands when we went to pet his head. So being 12 years old, we of course thought the worst -- thought maybe stroke or seizure or something like that, so we took him to the vet."

The vet examined the dog and told the couple their pet was stoned. He also told them he was seeing an increase in dogs accidentally ingesting marijuana.

"I am concerned that legalization could cause these types of challenges for not just dogs, but also children in public spaces that might come across a cookie or something," Knippel said.

"I think it's right to be concerned so as we move forward under legalization, I think people have to take responsibility for what they own, what they use, make sure they use it safely and in the right place, and not leave things lying around."

There's no sign the government is planning on including labelling rules aimed at protecting pets.

A spokesman for Health Canada referred only to edibles in his response to CTV's question about labelling. 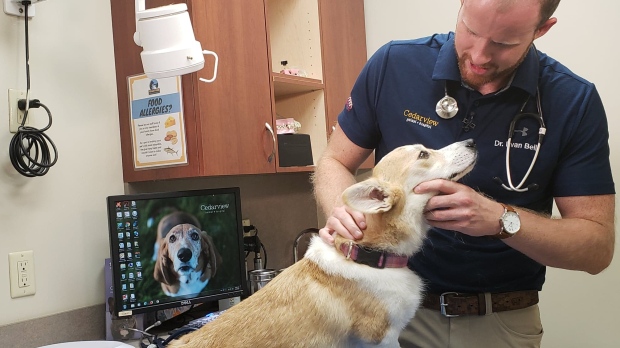 In a follow-up email, another spokesman said public education efforts will be expanded as the new law takes effect.

"Public education activities will continue to reinforce messages on the health and safety facts about cannabis, which includes the importance of securely storing cannabis, as well as border and travel information and drug-impaired driving," Eric Morissette wrote.

Health Canada intends to consult the public in early 2019 on the regulations for edibles, which will be legalized a year after dried cannabis, he added.

"This work will be focused on creating an appropriate control framework for products meant for human consumption."

Evan Bell, an Ottawa veterinarian, says he expects to see an increase in the number of dogs suffering from marijuana toxicity as barriers to access fall.

It can be scary for owners because the symptoms mimic those associated with neurological problems. Dogs can pass out or, in rare cases, die, Bell said.

"One of the most dangerous things to pets would be marijuana oil because that soaks the THC right out and that makes a very concentrated dose for pets. So things like baked goods and marijuana butter can be very dangerous for pets," he said in an interview with CTV News.

"For something like a very concentrated marijuana butter or a baked good, a very small amount -- a bite -- could be enough to cause severe signs [of poisoning]. For a small dog, the butt end of a cigarette could be enough. It really depends on the size of the dog and the concentration of THC within that product."

At the same time, Bell says he expects legalization to make it easier to diagnose the ailment.

"Right now people keep fairly tight-lipped about marijuana being in the house or even being a possible exposure risk," he said. "Us knowing that this is a potential cause allows us to make our treatment and diagnosis a lot quicker and more effective for the patient."

"We're not police officers. We're here to help your pet. We're not going to report you. If they may have got into it, that's all we need to know."

Some of the signs to watch for include:

Bell says pet owners should make sure their marijuana is inaccessible to children and pets, and to be careful about where the remnants end up.

"A big part of prevention is about being aware and being responsible with your use," he said.