OTTAWA -- Prime Minister Justin Trudeau has waived attorney-client privilege and cabinet confidence to allow Jody Wilson-Raybould to speak openly when she appears before the House Justice Committee as part of its study into the SNC-Lavalin affair.

The government made the directive in an Order in Council posted Monday evening. The order authorizes her, as well as "any person who directly participated in discussions with her," to speak to the committee and ethics commissioner, about the criminal prosecution of SNC-Lavalin.

"We obviously take very seriously the right of everyone to share their perspectives in various ways," Trudeau told reporters on his way to the Commons Monday, before first signalling that Wilson-Raybould would be able to "address relevant matters at the committee while ensuring that the two active court cases are not jeopardized."

The order relates to any information or communications that have to do with Wilson-Raybould's time as the attorney general and exercising her authority under the Director of Public Prosecutions Act, and only in regards to the two ongoing probes of the matter, and not a blanket permission for Wilson-Raybould to speak.

As well, the order states that Director of Public Prosecutions Kathleen Roussel is exempted from this waiving of privilege and any information or conversations between Wilson-Raybould and Roussel cannot be disclosed, "in order to uphold the integrity of any criminal or civil proceedings," the prime minister's office states in the Order in Council.

The prime minister has faced calls to waive solicitor-client privilege in the matter to allow Wilson-Raybould to speak publicly about allegations of political pressure being placed on her by members of the PMO in regards to an ongoing criminal prosecution of SNC-Lavalin.

Citing unnamed sources, The Globe and Mail reported on Feb. 7 that Trudeau's office pressed Wilson-Raybould to drop a criminal prosecution against SNC-Lavalin when she was attorney general. It was alleged that the PMO wanted Wilson-Raybould to instruct federal prosecutors to change course and pursue a remediation agreement rather than criminal prosecution in the corruption and fraud case against the Quebec engineering and construction giant. CTV News has not independently verified the story.

When she was attorney general, Wilson-Raybould had the ability to direct federal prosecutors to take a different route with the charges against SNC-Lavalin but she did not, despite several meetings and conversations on the matter before and after federal prosecutors decided to carry on with the criminal case in the fall.

In January, Wilson-Raybould was shuffled into the veterans affairs portfolio, and was replaced as attorney general and justice minister by David Lametti, a Quebec MP. Wilson-Raybould accepted her new position, but then resigned from cabinet days after the Globe story broke. So far, she's maintained solicitor-client privilege as the reason she’s yet to speak out publicly about the allegations, though she’s signaled a desire to “speak my truth,” and reportedly told cabinet members when she met with them last week at her request, that the pressure was improper.

According to minister Jane Philpott, who is a close friend of Wilson-Raybould, her former cabinet colleague is "doing very well."

Philpott said the two have been in "regular communication" and denied that there’s any division within cabinet as the affair continues to unfold. 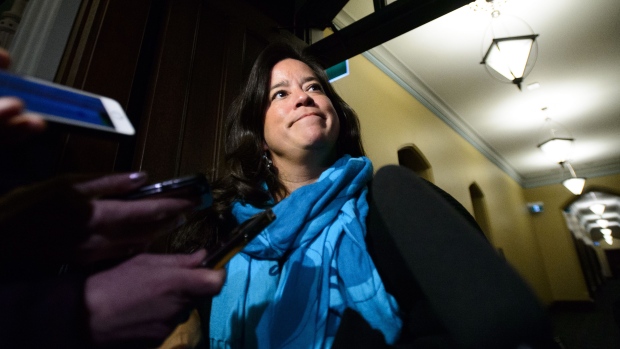 Wilson-Raybould wants half an hour to speak

This comes as Wilson-Raybould is expected to appear before the committee this week. While it was thought that she might testify on Tuesday, CTV News has been told that she is not scheduled to appear then.

Wilson-Raybould has sent a letter to the committee’s chair saying that she is "anxious" to appear but wants to make sure she has legal clarity on what she is able to comment on before making herself available. She’s suggested the committee get legal advice on the parliamentary convention known as "sub judice" which deals with speaking about cases currently before the courts.

In the letter she has asked to have an "extended opening statement" lasting 30 minutes during which she would be able to go through everything she recalls about communications she was involved in regarding SNC-Lavalin. Most opening statements at committees are limited to 10 minutes.

Wilson-Raybould wrote that she'd be happy to stay for as long as the committee wishes to answer questions.

The committee will be discussing her letter, likely behind closed doors, Tuesday morning.

The committee study continued Monday afternoon with testimony from academics who chimed in on the underlying legal aspects at the heart of the affair. These include the legal provision known as remediation or deferred prosecution agreements, which were tucked into a recent omnibus bill following heavy SNC-Lavalin lobbying, the Shawcross doctrine—which has to do with the independence of the attorney general in making decisions—and the discussions between the AG and government colleagues on SNC-Lavalin.

During the two-hour meeting, MPs heard from a handful of legal experts, both in the room and via video conference. These witnesses offered their hypothetical perspectives about the propriety of attorney generals making prosecutorial decisions, when the various principles are activated, and the balance of seeking advice from cabinet colleagues without succumbing to or factoring in politics.

“The attorney general should not pay attention or be influenced by considerations that are expressed with respect to the interest of a particular political party… On the other hand, if a member of cabinet has something to say to the attorney general by way of advice… I think it's for the attorney general to make his or her own decision as to whether to listen and entertain that advice,” said interim dean of Osgoode Hall Law School Mary G. Condon.

Later in the testimony she offered that "advice is one thing, pressure is something else."

Mary Ellen Turpel-Lafond, a legal counsel with Woodward and Company LLP, and law professor at the University of British Columbia, told the committee that what needs to be understood is how the situation unfolded.

"If the purpose was to persuade the attorney general as chief prosecutor to take a different position on a prosecution, it triggers a serious rule-of-law concern, and how will we know whether that’s serious or not? Well, obviously you need to hear from those who may have been involved. Maybe this is completely unfounded and we have no reason to be concerned. I certainly would hope that that’s the case," Turpel-Lafond told the committee.

She also spoke to whether Wilson-Raybould should have resigned while she was facing the alleged pressure as the attorney general.

"I'm not saying this is the case, but if she did get fired, I do not think the obligation is on her to resign… but if there's evidence that a prosecutor is fired and there was an attempt to influence or direct her attention to something that didn't have lawful authority, then it does raise the specter of obstruction of justice," Turpel-Lafond said.

Prior to Monday's meeting, the committee has heard from Lametti, his deputy minister, and top bureaucrat Michael Wernick, who gave blunt and detailed testimony.

Wernick disputed the allegations reported in the Globe and sought to reframe them, saying that while it's likely Wilson-Raybould could have felt pressured, it's a question of whether that constitutes as "inappropriate pressure," or pressure that comes with being part of the inner circle that makes key decisions with national implications. In his view, the pressure was "lawful and appropriate," and had to do with the broader “context” like the economic and job consequences should SNC-Lavalin be found guilty and not allowed to bid on government contracts for a decade.

Asked about the letter, and Trudeau saying that Wilson-Raybould will be permitted to speak to "relevant" aspects of the scandal, Conservative Deputy Leader Lisa Raitt said it's just another example of Trudeau speaking for her.

"What we're saying is, fine, if that's the way it’s going to be you should come in Mr. Prime Minister and tell us what you know because clearly you’re doing a lot of the talking right now," Raitt said. 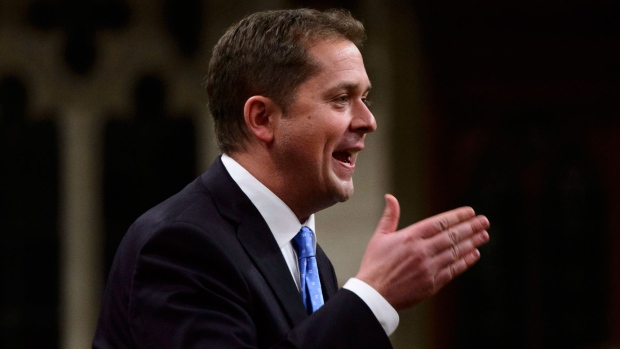 Meanwhile in the House, the Conservatives focused in on Trudeau and forced the Commons to spend the day debating their motion to have him testify at the justice committee.

In presenting his motion in the Commons, Conservative Leader Andrew Scheer implored Liberal MPs to vote in favour of it, though that was ultimately unsuccessful as the motion was defeated by the Liberal majority.

"We know that you're under tremendous pressure from political operatives within your own party who are trying to protect themselves," Scheer said Monday morning. "You have an opportunity and a responsibility to do the right thing, to stand up for the independent system of justice to prove that no one in Canada gets a special deal just because they're rich and powerful. There's one set of rules for every Canadian. You have the opportunity to do that today and I invite you to do the right thing."

The motion specifically invoked some of Trudeau’s own remarks on the case of alleged PMO political interference. The full text read: "That, given the Prime Minister's comments of Wednesday, February 20, 2019, that the Standing Committee on Justice and Human Rights is the appropriate place for Canadians to get answers on the SNC-Lavalin affair, and given his alleged direct involvement in a sustained effort to influence SNC-Lavalin's criminal prosecution, the House order the Prime Minister to appear, testify and answer questions at the Standing Committee on Justice and Human Rights, under oath, for a televised two-hour meeting, before Friday, March 15, 2019."

"Quite simply what we've seen unfold over the last two weeks is a textbook case of government corruption with those at the very top of the prime minister's office implicated in what could very well be the obstruction of justice," Scheer told reporters on Monday.

Responding to Scheer's remarks, Liberal MP and parliamentary secretary for justice Arif Virani cited the ongoing study, in which members have said there is still a possibility for new witnesses to come forward. "Why the distrust in allowing the committee to simply continue to do its work?" he asked.

Liberal MP and parliamentary secretary to the government House leader, Kevin Lamoureux, joined the debate by invoking former Conservative prime minister Stephen Harper, saying that for years the party has had "one focus, one agenda item and that is to personally attack members of this government and to take what I believe a course that is not in the best interest of Canadians."

Scheer said Wernick's testimony laid out the extent of unsolicited and co-ordinated efforts to have Wilson-Raybould change her mind.

In his response to Scheer's opening remarks in the Commons, Virani quoted a part of Wernick’s testimony that supported the government's position that Trudeau was consistent in telling Wilson-Raybould that offering a remediation agreement to SNC-Lavalin was her decision alone.

Two previous opposition attempts to have senior PMO staff testify at the committee were also unsuccessful, as was a motion to compel Trudeau to waive solicitor-client privilege and have a public inquiry launched.

NDP MP Tracey Ramsey used her time in the debate to bring up the perceived "racist and sexist undertones" of the ongoing affair, citing the personal attacks against the woman who was Canada’s first Indigenous justice minister and attorney general by unnamed Liberal sources in the days after the SNC-Lavalin controversy began unfolding. Trudeau has since apologized for not being quicker to condemn those comments.

To date, the government maintains that nothing improper occurred, though Trudeau's principal secretary resigned over the matter on Feb. 18, denying any wrongdoing.

Since the scandal hit Parliament Hill, federal ethics commissioner Mario Dion has launched an investigation, which Liberals continue to point to as the best avenue for examining the case, though such probes can often take months to complete.

"We continue to welcome the studies by the committee and by the ethics commissioner," Trudeau said Monday.