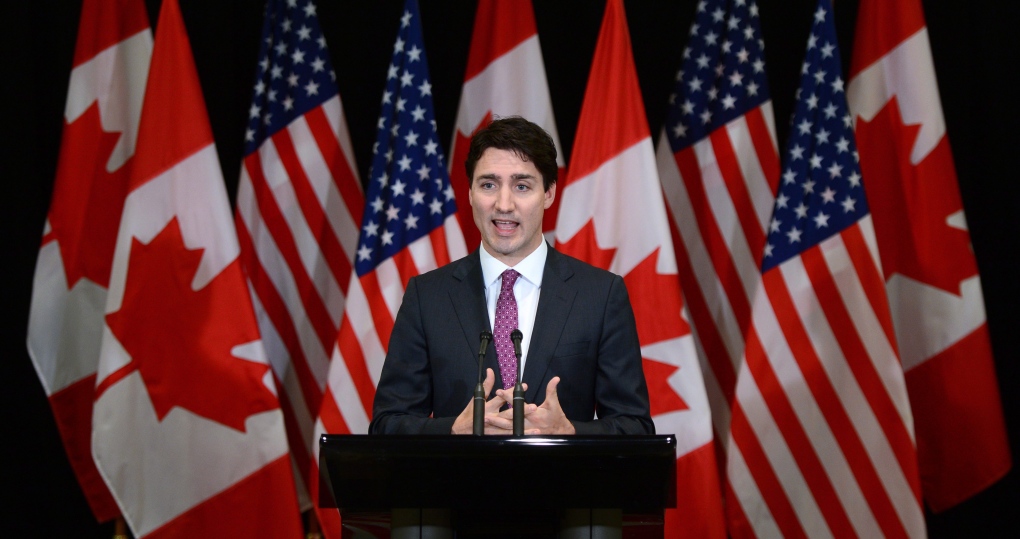 OTTAWA -- Prime Minister Justin Trudeau says he stands by the country's top soldier in his suspension of Vice-Admiral Mark Norman amid an investigation into cabinet leaks, but his comments have raised the concern of Norman’s high-profile lawyer.

Norman, who had been the second highest-ranking officer in the Canadian Armed Forces, was suspended by Gen. Jonathan Vance, the chief of the defence staff, on Jan. 9 amid a 15-month investigation into leaks of confidential material to lobbyists and the media.

"As I've said before, I support the chief of defence staff in the decision that he took," Trudeau told reporters in New York City.

"This is an important matter that is obviously under investigation and will likely end up before the courts so I won't make any further comments at this time."

“Politicians, including Prime Ministers, should not be commenting on whether a case is ‘likely’ to end up in court or not. To do so is not only prejudicial but inappropriate,” Henein said. “It is solely within the discretion of the police sometimes in consultation with the Crown to make charging decisions. No such decision has been made here. I expect what the Prime Minister meant to say is that he declined to comment further given that the matter is under investigation.”

Henein maintains that Norman is the victim of bureaucratic crossfire, in the fight for a multi-million dollar shipbuilding contract for the Royal Canadian Navy.

The RCMP alleges Norman leaked sensitive cabinet documents about the contract, and accuse him of breaking secrecy laws and breach of trust.

Newly released court documents give a glimpse of the investigation. They show the RCMP has interviewed two cabinet ministers, and has executed search warrants including on the officers of two lobbying firms who represent a major shipbuilding company.

The court records show Treasury Board President Scott Brison and Environment Minister Catherine McKenna, who used to chair the cabinet committee on defence procurement, were both interviewed as part of the probe tied to the military's shipbuilding program.

Brison said the leak compromised the government’s decision-making process, saying it “impacted our ability to do our work.”

The document, which the Globe and Mail successfully fought to have unsealed, is heavily redacted but refers to separate interviews with the ministers in January, 2016.

Neither would discuss the investigation.

'Not influenced by private sector'

"Unfortunately I can't comment until the investigation is over," McKenna told reporters in Montreal.

"I would say we're not influenced by private sector interests, and all cabinet discussions are confidential," she added.

Brison says he had no involvement in Norman's suspension.

"There has been an investigation. That continues. We do not comment on those," he said.

The RCMP filed the court document to obtain a search warrant to seize Norman's electronic communication devices. Previous warrants have sought emails from May 21, 2014 to July 31, 2016.

The leak concerned a 2015 decision to delay a contract with Chantier Davie Canada Inc. for a rebuilt Navy supply ship. The contract was awarded under the previous government, and the then-new Liberal cabinet wanted to review the decision.

While the majority of McKenna's comments are redacted in the unsealed warrant, Brison is quoted discussing the trouble the leak caused.

"It made our job much more difficult," Brison told the RCMP, according to the court records. "The rendering of this [classified information] into the public domain did an awful lot to limit our ability to really do what we'd intended to do, and that is more due diligence on this."

The Davie emails released in the court documents give a glimpse of the shipyard's strategy.

"We need to get this into as many hands as possible to put pressure on Brison," wrote John Schmidt, vice president, commercial at Davie, in an email accompanying a cabinet document.

"Want me to try some of the media here?" replied Brian Mersereau, one of Davie's Ottawa lobbyists.

One of the journalists who wrote about the secret cabinet discussions now works as director of policy for Defence Minister Harjit Sajjan and has since been lobbied by Irving Shipbuilding Inc., Davie's competitor.

Though McKenna initially chaired the cabinet committee on defence procurement, she was moved off the committee a month after the RCMP interview when Trudeau shuffled a number of ministers among the groupings.

A spokesman for Irving said neither the federal government nor the RCMP have contacted the company or its affiliates about the Norman investigation. He also said they don't know the reason for the probe.

He also provided a statement by the president of Irving Shipbuilding Inc. explaining the letter sent to some of the Liberal cabinet ministers.

“In November 2015, Irving Shipbuilding wrote to the Government of Canada with our concerns related to the Interim Refueling Ship project... We wanted to ensure that the new government had all relevant information prior to making a final decision," Kevin McCoy said in the statement.