PM Trudeau 'more than happy' to talk NAFTA with Trump 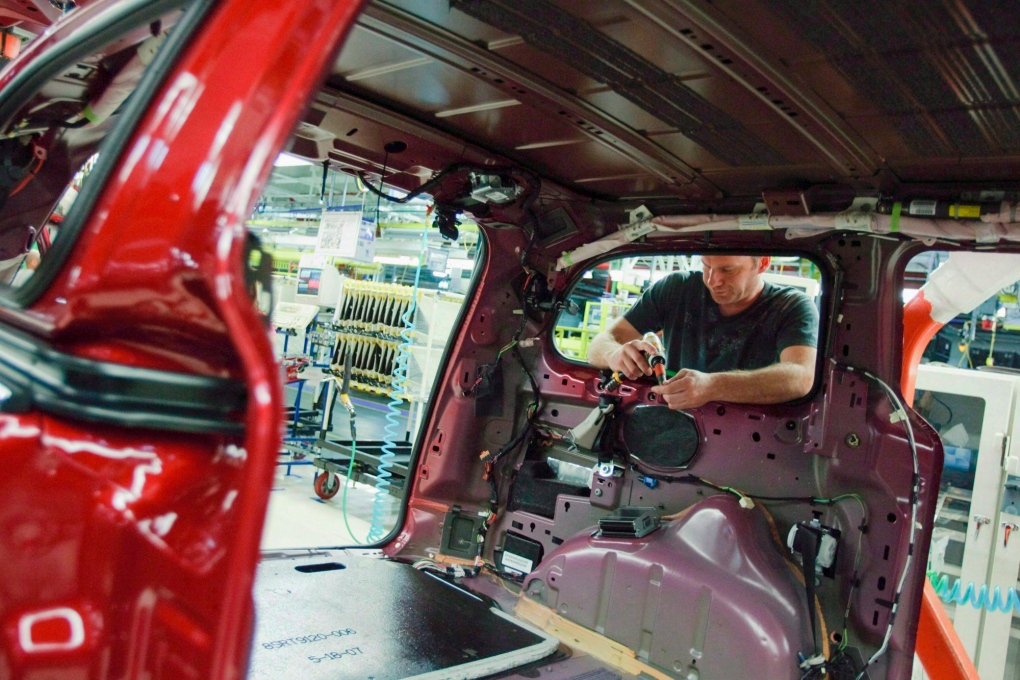 A worker installs parts on the production line at Chrysler's plant, in Windsor, Ont., in a January 18, 2011, file photo. (Geoff Robins / THE CANADIAN PRESS)

OTTAWA -- Canada is open to talking about its existing trade deals even if other countries want to re-open them, Prime Minister Justin Trudeau said Thursday.

At a news conference in Sydney, N.S., Trudeau said trade deals such as the North American Free Trade Agreement have to work for citizens, and that Canada is willing to sit down with its counterparts to discuss them.

The issue has sprung to prominence now that Donald Trump is the American president-elect. Trump campaigned on a promise to renegotiate NAFTA or tear it up, raising concerns in Canada about the economic impact.

"People know that we need to continue to work to ensure that the benefits for Canadians, for workers, for our economy, from trade deals around the world continue to accrue," Trudeau said, "and as our ambassador said, if the Americans want to talk about NAFTA, I'm more than happy to talk about it."

Yesterday, Canada's ambassador to the U.S. said the government is ready to go to the negotiating table.

"We’re prepared to talk," David MacNaughton said on a conference call with reporters. "We think that the agreement as it stands has benefited all three countries [including Mexico], but I think anything can be improved and so we're open to having discussions."

The Canadian and American economies are highly integrated, with $1.6 million in trade crossing the border every minute, according to numbers provided on the Global Affairs Canada website. Canada is the largest customer for the United States, and 73 per cent of Canada's exports go to the U.S. 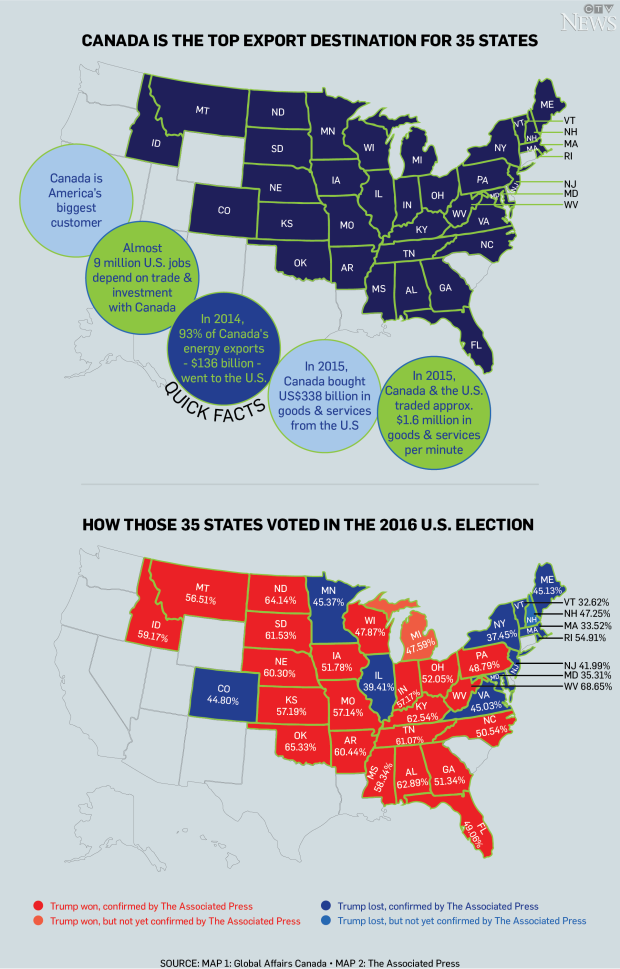 SOURCE: Global Affairs Canada and The Associated Press, based on data from November 10, 2016. (Tahiat Mahboob)

Trudeau spoke Wednesday evening with Trump, his office said, and invited the president elect to visit Canada "at his earliest opportunity." Trudeau said the conversation was brief, and that Trump "expressed warmth" toward Canada.

"I talked about how important the relationship is and has been, and that I look forward to continuing to work to promote Canadian interests and indeed opportunities for all as we move forward as two countries that have a lot to do together," he said Thursday.

"It was a brief call but a strong beginning to what is going to be a constructive relationship."

Interim Conservative leader Rona Ambrose questioned why Trudeau wasn't moving already on a renewed Keystone XL pipeline proposal. The pipeline extension would have run from Hardisty, Alta. to Nebraska, but U.S. President Barack Obama denied TransCanada the presidential permit two days after Trudeau took office. Trump says he would approve the pipeline, but demand a share of the revenue it generates.

"While [Trudeau is] talking about re-opening NAFTA, which could actually kill good jobs in this country, instead he should be picking up the phone and talking to Mr. Trump about getting [the] Keystone XL pipeline built as fast as possible, or approved," Ambrose said in Edmonton.

"Here is an opportunity, and he's said nothing about it. These are good paying jobs that will be created. We know Mr. Trump supports Keystone, Mr. Trudeau has said he supports it. then get on the phone and ask to have this pushed through as fast as possible."

TransCanada has challenged the denial under NAFTA.

International trade lawyer Lawrence Herman says Trump's comments during the election campaign were aimed at Mexico, but Canada will inevitably be drawn in.

"Once you start looking at Mexico and looking at the NAFTA as a package, inevitably the spotlight is going to be turned on Canada, Herman said.

"And from his whole demeanour and all the statements he's made, he's an America-first guy and he's not going to be particularly amenable to maintaining open markets to the benefit of Canada.... We'll have to do some very clever negotiating to maintain the NAFTA benefits."

Trump's election likely kills off the Trans-Pacific Partnership, an agreement among 12 Pacific Rim countries, including Canada and the U.S., Herman said. And it makes the recently concluded Canada-EU trade agreement even more important.

"[It's] important for Canada, but even for the EU to demonstrate that, in the face of U.S. protectionist policies, there are other avenues that major trading partners can pursue," Herman said.