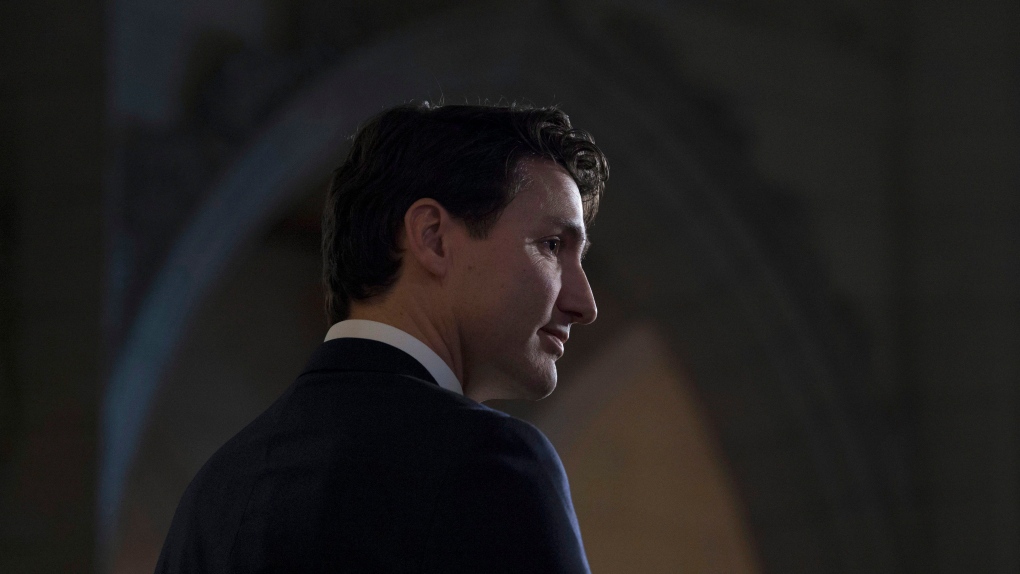 Prime Minister Justin Trudeau listens to a question from the media in the foyer of the House of Commons following the release of an ethics report in Ottawa on Wednesday December 20, 2017. (THE CANADIAN PRESS / Adrian Wyld)

OTTAWA -- Opposition parties are demanding that Prime Minister Justin Trudeau repay taxpayers for all or part of the transportation and security costs for a Christmas vacation to the Aga Khan's private Bahamian island last year -- which left taxpayers on the hook for more than $200,000.

Trudeau owes it to Canadians to foot the bill after Mary Dawson found the prime minister violated four different provisions of the Conflict of Interest Act when he and members of his family accepted the trip last December, Conservative ethics critic Peter Kent said Thursday.

"Perhaps he should consider returning ... a significant part, or perhaps all of the $215,000 of taxpayers' money that was spent in enabling his unacceptable holiday," Kent said in an interview.

He argued that the move would show Trudeau is sincerely sorry for his ethical lapse in accepting the Aga Khan's invitation to vacation on his private island.

In a report published Wednesday, Dawson concluded the vacation could reasonably be seen as a gift designed to influence the prime minister, whose government has had official dealings with the Aga Khan, a billionaire philanthropist and spiritual leader of the world's Ismaili Muslims, and his charitable foundation.

Following its release, Trudeau acknowledged he should have taken precautions and cleared his family vacation prior to the trip.

"I'm sorry I didn't, and in the future I will be clearing all my family vacations with the commissioner's office," he said.

"I've always considered the Aga Khan a close family friend, which is why I didn't clear this family trip in the first place, but given the commissioner's report, I will be taking all precautions in the future."

Trudeau evidently isn't the only political heavyweight who considers the Aga Khan a friend -- John Kerry, then U.S. secretary of state, was also a guest of the Aga Khan's at the same time, the Prime Minister's Office confirmed Thursday.

Dawson's report referred only to a "senior American official of a previous administration" being present on the island.

The PMO would not say what, if any, interaction took place between Trudeau and Kerry.

NDP ethics critic Nathan Cullen said he did not know what to make of Kerry's presence on the trip but questioned why Trudeau did not disclose that detail.

"Swimming with the rich and famous is the kind of thing Trudeau sort of dines out on," Cullen said. "Why wouldn't you tell us?"

Like Kent, Cullen also called on Trudeau to pick up the tab for his trip.

"He broke the law," he said. "Normally, when people take something they shouldn't, and broke the law doing it, they, at a minimum, pay it back. He took a free trip that he should never have taken."

A spokesperson for the prime minister said Thursday that Trudeau reimbursed the commercial equivalent of his and his family's flights to and from Nassau but would not disclose the precise tab.

Cullen wrote a letter Thursday to the chair of the Commons ethics committee, urging an emergency meeting be convened to examine the Dawson report and to hear directly from her prior to Jan. 8, when her term expires.

Dawson has no power to penalize Trudeau, other than by publicly shaming him, and Cullen said this demonstrates the Conflict of Interest Act needs to be strengthened -- something the NDP will push for in the new year.

The group has also asked Lobbying Commissioner Karen Shepherd to examine whether the Aga Khan violated the Lobbyists' Code of Conduct by giving Trudeau the gift of a Bahamian vacation.

Shepherd's office said Thursday it has received a letter from Democracy Watch and, while the commissioner takes all allegations seriously, her investigations must be conducted in private.