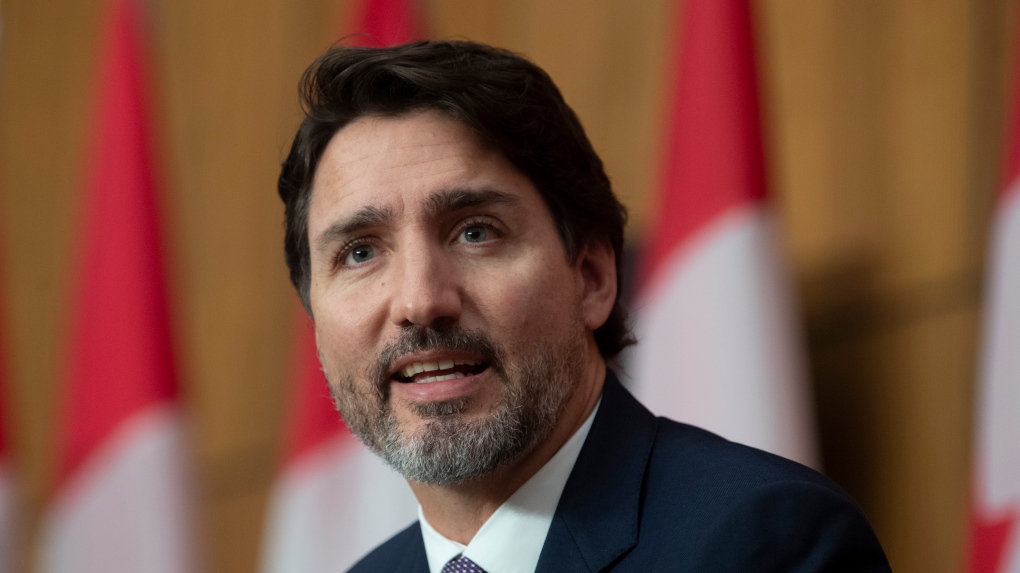 Prime Minister Justin Trudeau responds to a question during a news conference Friday October 23, 2020 in Ottawa. THE CANADIAN PRESS/Adrian Wyld

OTTAWA -- The government's promised update on the health of its finances won't have a specific anchor to guide decisions and keep spending from spiralling out of control, Prime Minister Justin Trudeau says.

Officials have started working on what Trudeau called a "robust" budget update promised in the throne speech, with budget submission letters having gone out to departments.

Trudeau didn't say Monday when the fiscal update or mini-budget would delivered, only that it will provide some guidelines for ongoing spending to help the economy.

Speaking to the Canadian Chamber of Commerce, the prime minister said it would be premature to lock in a spending anchor while the country is still dealing with the pandemic.

He defended the unprecedented scale of federal aid, saying doing anything less would have ended up costing the country far more in lost businesses and jobs.

The Liberals projected in July that the government would run a historic deficit of $343.2 billion this fiscal year, but extended spending programs and throne speech promises will shift that number.

It has already meant the Liberals will have to jettison their guiding budgetary light of keeping the debt declining as a share of the economy. That figure is set to jump, with debt expected to climb over $1 trillion.

"The cost of having massive numbers of businesses go out of business because of this pandemic, the cost of having households diving into debt on their credit cards, on extra mortgages, because they can't make it through would be much (worse)," Trudeau said during the virtual appearance.

He vowed to keep doing whatever is necessary to help workers and businesses make it through the pandemic, but wouldn't commit to a fiscal anchor to guide decisions. He said the coming update will talk about the fiscal resources available, but cited ongoing uncertainty about the course of the pandemic.

"It would be premature to be locking things down. But we will certainly talk about the frame and the responsibility that's necessary," he said.

For now, interest rates are low, which keeps costs low for governments taking on debt.

"If we do that, if we see GDP growth and get spending down, I think we can avoid a looming crisis," he said.

"The Trudeau government has no plan with respect to spending, and their policies have actually been leading to job loss. So we are on a precipice."

Trudeau also used his morning address to announce that businesses that use personal banking accounts could finally apply for a popular federal loan program.

He added that legislation would be soon tabled in the House of Commons to send more direct rent relief to companies, as well as an extension to the wage-subsidy program.

The changes address what business groups and opposition parties noted as key shortcomings in the plethora of pandemic aid programs.

The updates to the loan program, for instance, were first mentioned in the spring, and the government vowed to make the necessary changes in May. The rent-subsidy program originally flowed through landlords, who weren't keen to take it up.

O'Toole said moving into the second wave of the pandemic, parliamentarians should be asking if aid programs need to be changed to avoid a repeat of mistakes that "doomed a million Canadians to a much harder recovery than was necessary."