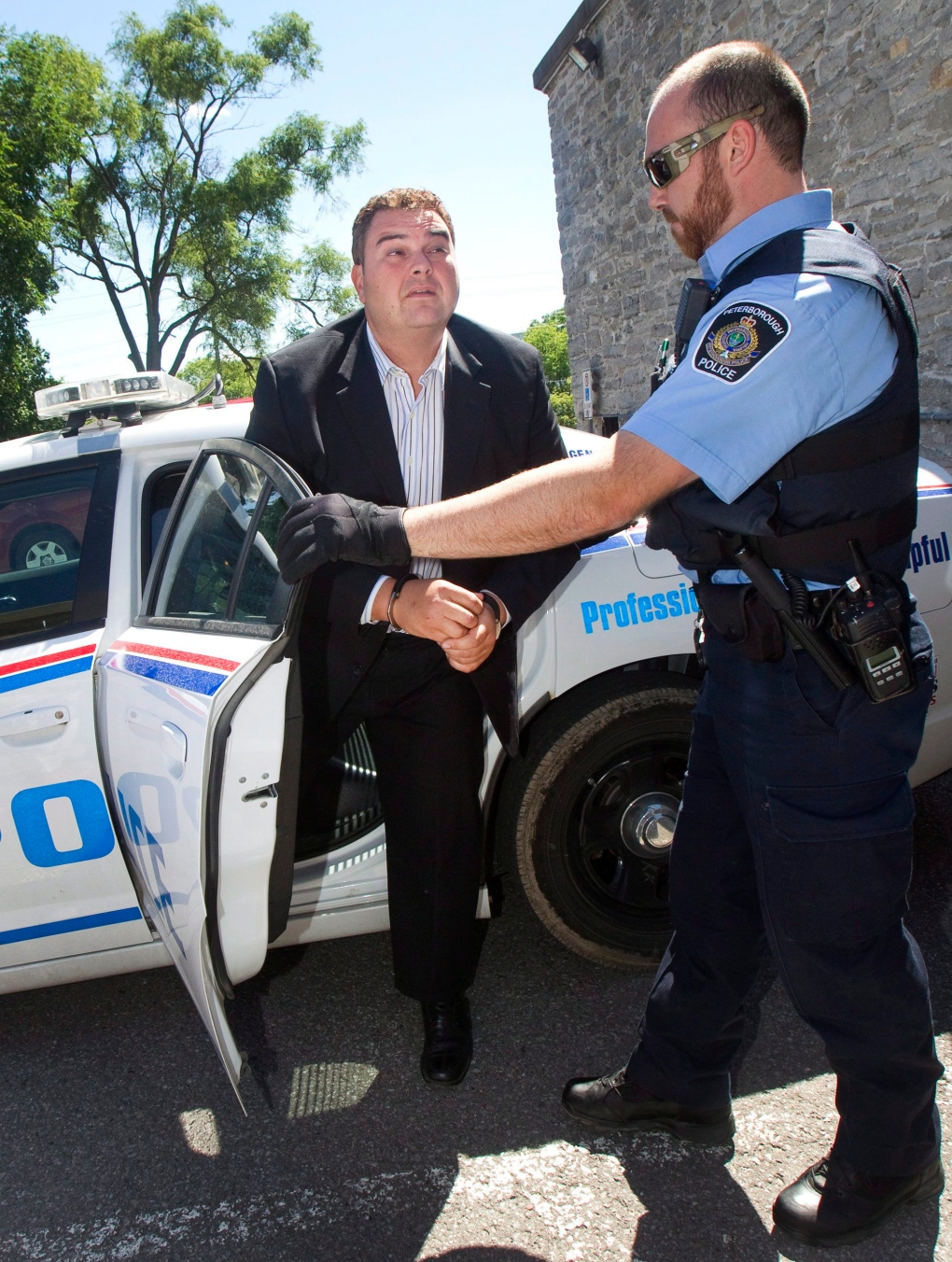 Del Mastro was sentenced Thursday to a month in jail after being convicted of cheating during the 2008 federal election and covering up his crime.

He was granted bail Friday, but not before spending a night in jail after being marched to a waiting van wearing handcuffs and leg shackles -- TV cameras rolling all the while.

Sgt. Peter Leon of the OPP's corporate communications branch in Orillia, Ont., said the same procedure is used for all offenders being transported to jail.

"It does not matter what the offence is," Sgt. Leon told The Canadian Press in a telephone interview.

"Anyone who is being transported within one of our offender transport vehicles is transported the same way."

Some courthouses have transport areas that are secluded within the building, but others may have unobstructed public vantage points where cameras can glimpse offenders being loaded into the transport vehicles, said Leon.

"It's another example of sort of a one-size-fits-all solution to perceived problems in the justice system," said Spratt, a frequent and trenchant critic on social media of Conservative "tough-on-crime" policies.

Ottawa's courthouse has a private basement garage where the accused and convicted are loaded and unloaded for transport far from public view, but that's not the case everywhere.

That's one reason the public doesn't often witness the "sort of a perp walk where the prisoner is loaded into a car and is shackled in plain view," said Spratt.

Vern White, a Conservative senator who spent 25 years in the RCMP and most recently was the chief of the Ottawa Police Service, said it's routine procedure to put handcuffs on people being made to ride in a police vehicle.

"I was in policing for 32 years, I don't think I've put leg shackles on a person in my life -- and I've probably done 29 people convicted of murder."

But Catherine Latimer, executive director of the John Howard Society, which helps prisoners and former convicts, said you can see prisoners from the Ottawa Detention Centre arriving for treatment at local hospitals in bright orange jumpsuits, handcuffs and leg shackles.

"That's standard now, and it doesn't attract much criticism unless there are a lot of television cameras trained on it and it happens to be someone that people have seen in another context," she said.

"Our position is it's unnecessary to humiliate or place people in a degrading position who are involved in the criminal justice system."

Latimer was diplomatic when asked about the optics of seeing the tables turned on a former prominent spokesman in a Conservative government that makes a virtue of harsh treatment of criminals.

She said the most committed advocates for prison reform tend to be those who have experienced the system first hand.

"It's really an eye-opener for people."

"I would hope that the public would understand that the way police treated him is simply the way they treat everybody, regardless of whether you're convicted or not convicted," said Adler.

In the country's current pre-election fever, the Del Mastro images will have more political than legal impact.

"It's prejudicial to the extent that this is a powerful image," said Spratt, the criminal lawyer, but "legally it's not prejudicial."

"But certainly it does create a perception that may not reflect reality in terms of his flight risk or any safety concerns that may be involved."