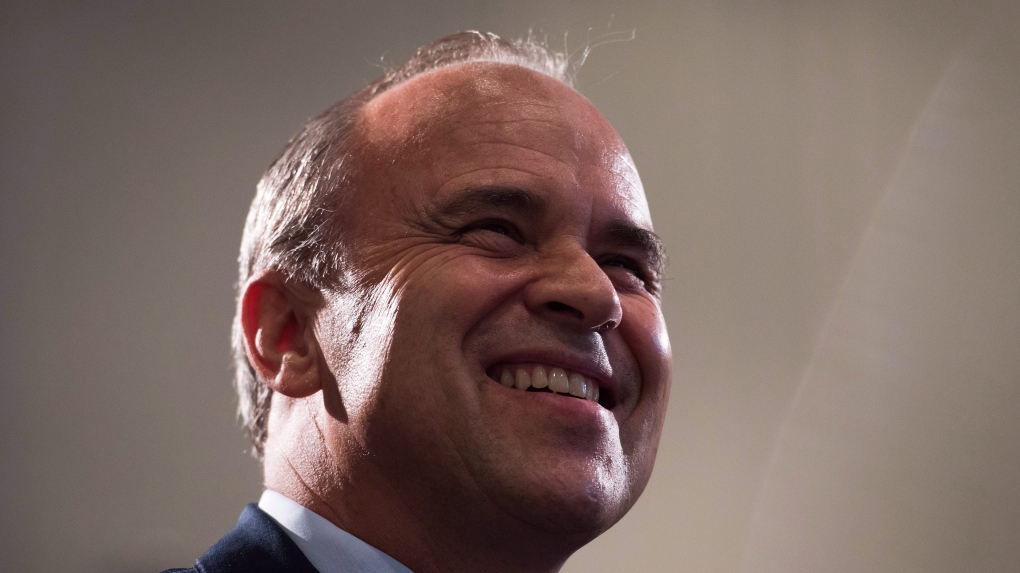 Financial services executive Rick Peterson smiles before announcing he will run for the federal Conservative Party leadership, during a news conference in Vancouver, B.C., on Tuesday Oct. 18, 2016. (Darryl Dyck / THE CANADIAN PRESS)

OTTAWA -- The ballot for the Conservative leadership race appeared to firm up even more Friday as one candidate was kicked out of the contest and another dropped out.

That leaves just Ontario MP Marilyn Gladu actively trying to make the March 25 deadline to pay a hefty fee and submit the thousands of signatures required to join the four others who have met that target: Leslyn Lewis, Peter MacKay, Erin O'Toole and Derek Sloan.

While Ontario conservative activist Jim Karahalios had been saying two days ago he'd raised the full $300,000 and collected all 3,000 signatures to get his name on the ballot, behind the scenes he had been fighting to stay in the race.

Karahalios, best known for advocacy campaigns within the Ontario Progressive Conservatives to change party policy, had primarily been running his federal leadership effort on the theme of stopping a "Red Tory Coronation." That's a dig at the two front-runners, O'Toole and MacKay and their links with the more progressive side of the party.

But he has made explicit attacks on O'Toole, circulating emails to supporters suggesting O'Toole's campaign chair wants to bring Islamic religious law to Canada. Walied Soliman, a prominent Toronto lawyer, has worked on laws related to financial instruments that are compliant with Islamic restrictions on charging interest, for example.

Accusing someone of being in support of "sharia law" is a common anti-Muslim slur.

Complaints were lodged with the party and it had been investigating.

Earlier this week, leadership race organizers decided to disqualify him, but Karahalios appealed.

On Friday, the party announced he lost the appeal but did not cite a specific reason why.

Karahalios did not immediately respond to a request for comment.

Rick Peterson, who had run for the leadership in 2017, dropped out of the race Friday. He said raising money and collecting signatures had been "severely hampered" at a time when Canadians are being told to avoid in-person contact and when many are facing a financial crunch.

Peterson has been among the candidates calling for the party to bump back the March 25 deadline, but the party has refused. Organizers argued that since there are candidates who have met the requirements it should stand.

Peterson said the leadership organizing committee, known as LEOC, made a decision that "flies in the face of common sense, decency and conservative values," and suggested it will call the results of the race into question.

"The party's unwillingness to change the rules is unfair to the candidates in this race, unfair to the party's grassroots and ultimately it will be unfair to this race's winner since it is clear to everyone aside from LEOC and national council that the process is fundamentally flawed.

Peterson's decision to quit followed a similar move by longtime political staffer Rudy Husny to suspend his own campaign on Thursday, citing a refusal to ask people for money during the pandemic.

Husny has not formally dropped out but suggested he does not expect to meet the March 25 deadline.

Gladu has also called for it to be pushed back, but said Thursday she will continue to campaign.

Although his name is already on the ballot, Sloan took to Twitter on Friday to call on the party to postpone the leadership vote, scheduled for June 27, until November. That's the only way to ensure "a proper campaign where voters can actually meet the candidates," he argued.

"How can leadership candidates talk about a broad range of issues when there is really only one issue (COVID-19) that's on anyone's mind?" Sloan tweeted.

Sloan said it seems the only people who want the leadership contest to proceed as scheduled are "the two Red Tory candidates (MacKay and O'Toole) and their supporters on the LEOC."

This report by The Canadian Press was first published March 20, 2020.