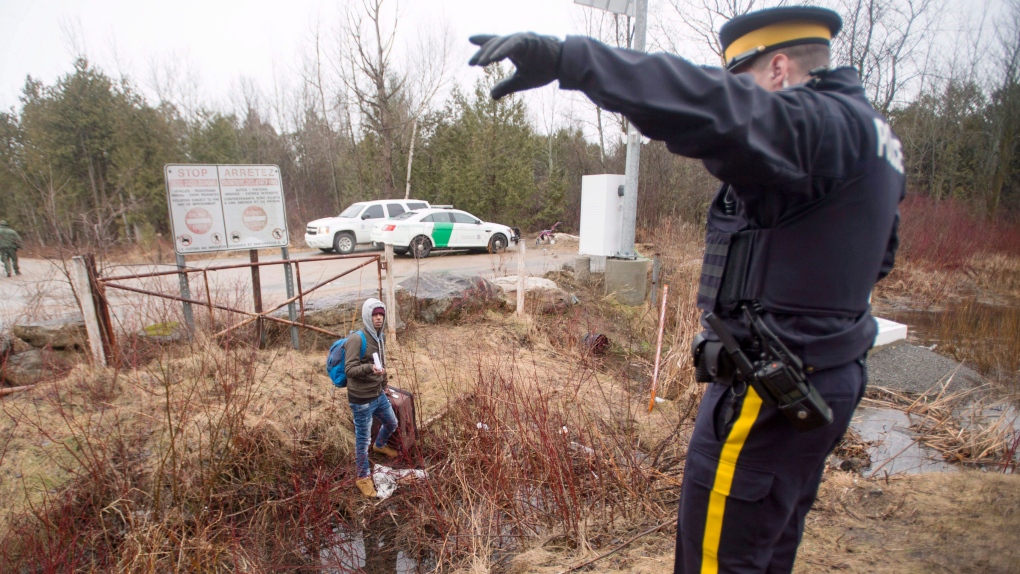 An RCMP officer warns a man to cross at the legal border crossing or he will be arrested at the border from New York into Canada on Wednesday, March 8, 2017 in Hemmingford, Quebec. THE CANADIAN PRESS/Ryan Remiorz

OTTAWA -- The Trudeau government says there will be upheaval at the Canada-U. S. border early next year if a refugee pact between the two countries is allowed to expire.

Federal lawyers are asking the Federal Court of Appeal to stay a July ruling that struck down the Safe Third Country Agreement but left it in place until mid-January.

Under the refugee agreement, which took effect in 2004, Canada and the United States recognize each other as safe places to seek protection.

It means Canada can turn back potential refugees who arrive at land ports of entry along the border on the basis they must pursue their claims in the U.S., the country where they first arrived.

Ottawa is appealing the Federal Court ruling that nixed the agreement, and argued in a hearing this morning that the Appeal Court should pause the decision until the full challenge is resolved, effectively leaving the refugee pact in place beyond January.

Refugee claimants and their advocates say the federal application for a stay must be rejected, given that a judge found the bilateral agreement violates the Charter of Rights and Freedoms.

Court of Appeal Justice David Stratas raised the notion today that "the government of Canada is thumbing its nose at the Federal Court" by not affording much respect to the six-month grace period, from July to January, it has given Ottawa to adapt to the ruling.

Federal lawyer Martin Anderson said the usual period in such cases is a year. "Six months is awfully short."

In a written submission, federal lawyers say the absence of the agreement would serve as "a pull factor" attracting people to make a claim for protection in Canada.

"This will impact all types of port of entry operations and result in significant delays for persons making refugee claims at the land port of entry," the government submission states.

Lifting the agreement could also "create negative ripple effects and backlogs" in the overall immigration and refugee system, the government argues.

"This could undermine the ability of Canada's refugee protection system to determine claims and offer protection in a timely manner to those who have not had the benefit of accessing an asylum process in another safe country."

Canadian refugee advocates have vigorously fought the asylum agreement, arguing the U.S. is not always a safe country for people fleeing persecution.

In each case the applicants, who are citizens of El Salvador, Ethiopia and Syria, arrived at a Canadian land entry port from the U.S. and sought refugee protection.

They argued in court that by returning ineligible refugee claimants to the U.S., Canada exposes them to risks in the form of detention and other rights violations.

Detention and the consequences flowing from it are "inconsistent with the spirit and objective" of the refugee agreement and amount to a violation of the rights guaranteed by Section 7 of the charter, she wrote.

"The evidence clearly demonstrates that those returned to the U.S. by Canadian officials are detained as a penalty."

In their submission to the Court of Appeal, the refugee claimants and their advocates say the government has failed to show that it would suffer irreparable harm if the agreement expires in January.

They contend the government's assertion that the Canadian refugee system would be overwhelmed is based on speculation and ignores the reality that all travel, and therefore refugee claim numbers, is dramatically down because of the COVID-19 pandemic.

This report by The Canadian Press was first published Oct. 23, 2020