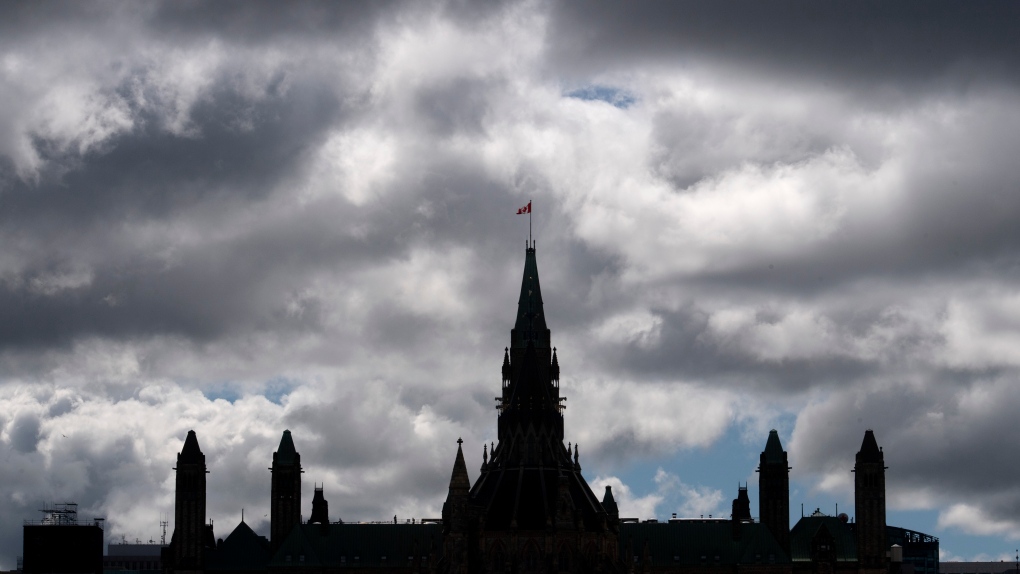 Clouds pass by the parliament builidings Wednesday August 19, 2020 in Ottawa. Parliament will resume Sept. 23 with a Speech from the Throne after it was prorogued Tuesday. THE CANADIAN PRESS/Adrian Wyld

OTTAWA -- The four opposition parties in Ottawa are making demands of the minority Liberal government ahead of next week's federal budget, but their leverage is limited.

NDP Leader Jagmeet Singh has pledged not to trigger an election regardless of what the budget has in store on April 19, a move that potentially weakens New Democrats' say in the final product.

"Our support for the actual budget is not probably a concern for the Liberals, because they want an election. They want an excuse to go to an election," he said Tuesday.

Singh is calling for a stronger federal role in on-the-ground COVID-19 vaccine administration as well as concrete steps toward a national child-care plan, which the Liberals have pledged periodically since 1993.

Bloc Quebecois Leader Yves-Francois Blanchet says he would likely back the first budget in more than two years if it sufficiently boosts monthly support for seniors and no-strings-attached health transfers to the provinces.

"Our conditions have always been very clear," he said, adding that his phone conversation with Trudeau on Monday was "polite and quite interesting."

Conservative Leader Erin O'Toole, whose party has the second-most seats in Parliament at 121 out of 338, said Monday he stressed job creation and minimal taxation in his phone chat with the prime minister.

Green Leader Annamie Paul wants to see residential tenant relief established now that eviction moratoriums have lifted across the country and emergency student benefits resurrected starting May 1 at $2,000 per month -- more than the $1,250 offered last year.

"This is something that is just a storm on the horizon that we have the chance to wave off," Paul said of looming evictions, noting that commercial tenants have access to the emergency rent subsidy.

She added that the student unemployment rate soared last summer, hitting 47 per cent in July and August, according to Statistics Canada.

All four opposition leaders spoke with Trudeau early this week to make their case on the budget, which could result in an election if the three main opposition parties vote against it to topple the 16-month-old Liberal government.

Like other party heads, Trudeau has repeatedly said he does not want an election. But he declined to swear off triggering one until the passage of Bill C-19 -- legislation now in second reading that would amend voting laws to allow for a safe election during a pandemic.

"Obviously nobody wants to have an election right now. Certainly we do not," he told reporters, while leaving the door open to one on the near horizon.

"I think it is simply responsible to make sure that parties have the choice, for example, to vote against the budget we're putting forward next week, and not feel threatened that democracy is so fragile that we can't have an election because they would be putting Canadians at risk."

Trudeau could decide to pull the plug himself and Liberal insiders suggest that may happen over the summer, provided the vaccine rollout continues apace and the pandemic, currently spreading like wildfire once again, is sufficiently doused.