The opposition hammered the Conservative government in question period Tuesday over the latest audit from Canada’s environment commissioner, which said that a vast disparity exists between Ottawa's rush to develop Canada's natural resources and the rules and regulations governing such development.

The result could mean major environmental and economic risks for the industry, Environment Commissioner Scott Vaughan said Tuesday, as he delivered his final report in Ottawa, preparing to exit the post he has held for five years.

The risks, he said, come as Canada experiences an unprecedented “boom” in the natural resource sector.

Vaughan said the federal government plans to develop $600 billion in natural resources in the coming years, while shale gas production will double and tanker traffic off Canada’s west coast will increase three-fold in the next few years, as new customers come calling for Canadian oil.

"If environmental regulations and environmental protection does not keep pace with that level of economic activity, then it puts Canadians at risk in terms of exposure to pollutants, to contaminants -- but also exposes them to real economic costs," Vaughan told reporters.

“Under the Conservatives, environmental protection is not keeping pace with resource development,” Mulcair said in the House. “In Canada, polluters are no longer required to pay for the pollution they create. Why are the Conservatives letting big polluters off the hook and sticking taxpayers with the bill to clean up the environment?”

“The government has already announced particular measures in this regard. In terms of the environment commissioner’s report it contains a number of useful suggestions in terms of the next steps we will be announcing.”

In his report, Vaughan said regulators are struggling to make sense of the changing legislation, shifting responsibilities and outdated financial liability requirements to cover the costs of potential environmental damage when projects go wrong.

And offshore oil exploration companies in Canada are only required to carry coverage for up to $40 million for Arctic projects and $30 million for those in the Atlantic.

Vaughan said this is particularly troubling in the wake of the Deepwater Horizon disaster in the Gulf of Mexico, where the cleanup costs topped an estimated US$40 billion.

"The order of magnitude of these gaps is really substantial," he said, noting taxpayers would likely be on the hook to cover the cost of such a spill in Canadian territory.

NDP MP Peter Julian accused the federal government of “putting Canadians at risk,” saying taxpayers would have to “fend for themselves” in the wake of a disaster.

“Conservatives are playing Russian roulette on oil spill cleanups. There’s a $30-million liability limit. Supertanker spills cost billions of dollars, and this negligence means our tourism, fishery and the economies of our coastal communities are all being put at risk,” Julian said. “Even one tanker could mean Canadian families on the hook for billions of dollars in clean-up costs. So why have the Conservatives left Canadians standing on the edge of a liability cliff?”

Conservative MP Michelle Rempel, parliamentary secretary to the environment minister, said the government is committed to periodic reviews of financial liability limits “to make sure that Canada’s polluter pay system remains the strongest in the world.”

In his report, Vaughan also noted that Canada's preparedness to deal with a major offshore oil spill in the Atlantic Ocean, if it did occur, is highly doubtful, adding that those concerns extend to potential disasters involving tankers, the oilsands and pipelines.

"If you put all these together ... you end up with a portrait where there are some serious questions about the federal capacity to safeguard Canada's environment," Vaughan said.

Vaughan told CTV’s Power Play that up to 800 different chemicals can be used in the process, which involves pumping a mixture of water, sand and chemicals at a high pressure into drilled wells.

Vaughan said up to 200,000 litres of chemicals can be found in each fracking well, including acid and pesticides.

“We went in and asked Environment Canada, Health Canada: ‘What are you doing in this area?’ And the answer is: right now, very little,” he told Power Play.

Environment Minister Peter Kent responded quickly to Vaughan's report Tuesday, issuing a statement that said the "recommendations are important and we will ensure they are addressed."

"Our government is committed to developing Canada's rich natural resources while strengthening environmental protections,” Kent said. “In the Economic Action Plan 2012, our Responsible Resource Development initiative set out a comprehensive plan to accomplish many of the same objectives listed in the Commissioner's report.”

He added: "We are developing regulatory and legislative actions to provide the necessary protections for Canadians and appreciate the Commissioner's perspective in this regard."

In terms of offshore oil development, Kent said Canada has a strong record and robust licensing requirements for companies approved to work in the sector – and, in the end, operators are primarily responsible for spill response, not the federal government.

However, Kent added there is room to improve to ensure Canada is ready for a spill, and the government is “reviewing the roles and responsibilities of our organizations in promoting a collaborative and efficient response in the event of a spill."

Vaughan announced he is leaving the post to join the Winnipeg-based International Institute for Sustainable Development, a public policy research institute.

Despite the issues raised in his latest report, Vaughan said there have been improvements in Canada’s environmental efforts over the past five years.

“I have more confidence in this system than I did going in,” he said. 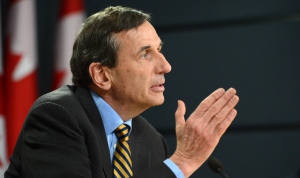