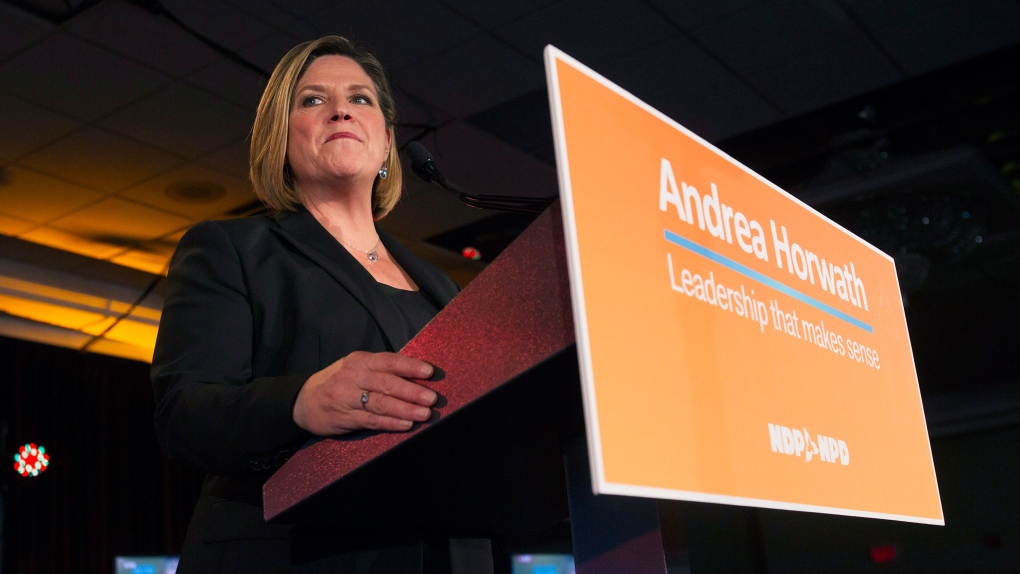 TORONTO -- Andrea Horwath will have to stare down challengers to her leadership when Ontario's New Democrats gather in Toronto this weekend for a provincial council meeting, the first since the party lost three seats in the city in the June 12 election.

Horwath won't face a leadership review Saturday -- that will come at the party's annual convention in November -- but one group of New Democrats angered by the party's election platform say she should resign.

The NDP's socialist caucus is circulating a petition saying Horwath had no mandate to "turn the party to the right, to wage a right-populist campaign that so alienated labour unionists, social justice advocates and progressives," and therefore must step down.

Horwath downplayed the internal dissent while admitting that the party did not do as well as it should have in the election, which saw the Liberals re-elected to a majority, taking away the balance of power the NDP had held since the 2011 election when the Liberals were held to a minority government.

"There's no doubt New Democrats are a vigorously democratic party and have healthy debates and discussions and that's a good thing," she said.

"I'm looking forward to the provincial council this weekend as well as our convention in November, because that is the opportunity for our members to participate in that kind of debate."

Other New Democrats who didn't want to be named said there was a lot of anger at Horwath over the election campaign, not just among the socialist caucus.

Veteran New Democrat Cheri DiNovo was the only MPP to attend a meeting last Saturday of the socialist caucus, which was called to talk about the party's future and the campaign for a leadership review.

DiNovo did not return calls from The Canadian Press to discuss why she attended the meeting, but Weisleder said DiNovo was "very supportive" of the group's call for a change in leadership and policy direction.

Horwath and her supporters abandoned core NDP values in search of votes, and should have forced the election in 2013 instead of waiting until this year, added Weisleder.

"The big mistake was not pulling the plug a year earlier, propping up the government and then allowing the Liberals to falsely promise an Ontario pension plan and a whole raft of reforms that I think they have no intention of implementing," he said.

Horwath said there will be a full debriefing on the campaign at the provincial council this weekend, but wouldn't say if she planned to offer an apology for the campaign or for rejecting a Liberal budget that many New Democrats considered very progressive, triggering the June election.

"Did we do everything right? Absolutely not," she admitted.

"Did we do everything wrong? Absolutely not, and that's why we had the mixed results we had where we gained (three) seats in important parts of the province but we lost (three) Toronto seats."

Weisleder said there's nothing Horwath could say this weekend to turn around the opposition to her leadership.

"It's quite clear there's a mood for change," he said.

Horwath and her supporters "pushed through" rule changes last spring on delegate selection to allow "stacking of the convention by people who are going to vote against a leadership review," added Weisleder.

"This rule is going to be challenged on constitutional grounds at the meeting on Saturday, and that's just one example of the democratic revolt taking place."

But the NDP executive said efforts were in the works for a long time to "clarify" the rules around delegate selection and were not aimed at stacking the convention with Horwath supporters.

"Any member of the party in good standing can go on a wait list for a convention and if delegate spots are filled by riding associations, then those spots will be made available to people on the wait list," said NDP provincial secretary Darlene Lawson.

Organizers of the anti-Horwath movement say they need only 35 per cent of delegates at the November convention to vote for a review and a leadership race will take place, but the leader herself wouldn't say if she needs the support of at least two-thirds of the delegates to hang on to her job.

"I think I'm going to leave that up to the members of the party to have that discussion," said Horwath, who got 76.5 per cent support on her last leadership review two years ago.