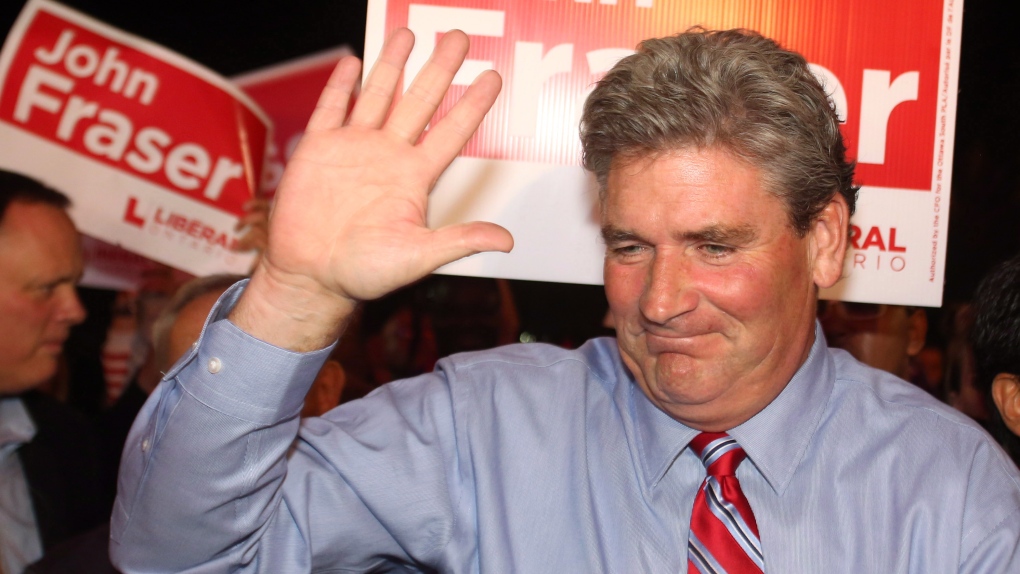 TORONTO - The new interim leader of Ontario's Liberals says grassroot members will play a crucial role in rebuilding the party after its stunning defeat in last week's election.

In a brief statement, Fraser acknowledged there will be years of rebuilding ahead for the party, but promised to work toward the renewal process.

"I will be communicating with our membership over the coming days and am committed to working closely with them, and with our supporters across the province to build a strong and inclusive Liberal Party," he said.

The Liberal caucus, which was reduced to seven members, had unanimously endorsed Fraser for the position on Wednesday evening.

Liberal Party President Brian Johns lauded Fraser as a dedicated party member who has been involved in politics in different capacities for 40 years.

"John is extremely committed to our Liberal family," Johns said. "And I believe he has the right mix of experience, dedication, and hunger for hard work, that our party needs as we begin the process of reconnecting with our grassroots."

A backbencher in the Liberal government, Fraser was first elected in a byelection in 2013 that was called after former party leader Dalton McGuinty stepped down.

Fraser's appointment comes a day after the Liberals held their final cabinet meeting, a gathering that focused on rebuilding the party that governed the province for the last 15 years.

Outgoing Premier Kathleen Wynne resigned as party leader on election night after her government was defeated by Doug Ford's Progressive Conservatives. The Tories, who won a majority, will take power on June 29.

Prior to being elected Fraser, a married father of three, worked in McGuinty's Ottawa constituency office for 14 years.

University of Toronto political science professor Nelson Wiseman said the degree of difficulty of Fraser's job will depend greatly on whether party manages to gain official status in the legislature.

Wynne has said she hopes Ford will change the rules to grant the Liberals' the designation, which currently requires eight seats in the legislature. Ford has only said he'd talk to his team about the issue in the days and weeks to come.

Official party status brings, among other things, research resources and allocated speaking time in the legislature. Without those resources the rebuilding process could take longer and be harder, Wiseman said.

"That's a very big factor," he said. "If they don't have official party status they can't serve on legislative committees. If they don't have the research support ... they'll be swinging blindly when large technical bills come up."

Wiseman said the interim leadership role will be demanding and likely see Fraser required to travel across the province to meet with grassroots party members and try to get media attention.

Wiseman said it has also become an expectation of modern politics that the interim leader won't run to helm the party permanently, something that didn't used to be the case.

"Once upon a time you'd be the interim leader and then it was seen as a stepping stone to becoming the leader," he said. "Leadership races have become these big productions now where everyone gets a vote and the onus is now selling tens of thousands of memberships."