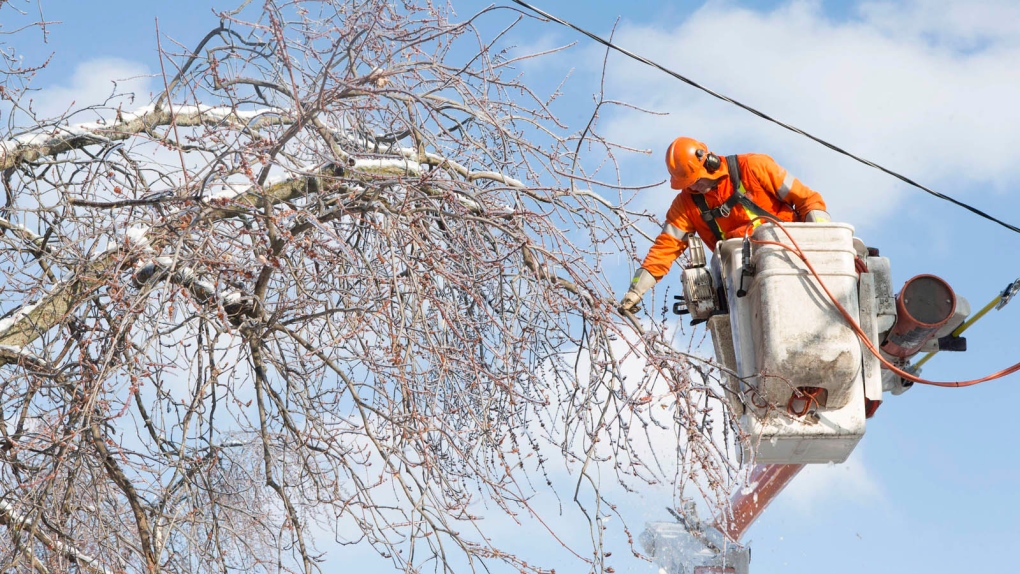 Hydro One worker Sean Williams works from a bucket as his crew work to restore power to a house in Scarborough, on Friday, December 27, 2013. (THE CANADIAN PRESS/Chris Young)

TORONTO -- A decision 16 years ago to divide Ontario Hydro into several different companies resulted in a new charge that's still on all electricity bills and a multibillion-dollar debt that critics warn will keep driving up rates for years to come.

The residual stranded debt stems from the 1999 breakup of the province's giant electrical utility, which had $38.1 billion in debt, mostly from building nuclear plants in the 1970s and '80s.

Only a portion of that debt was supported by the assets of the new hydro companies -- Ontario Power Generation, Hydro One and the Independent Electricity System Operator (IESO) -- leaving $20.9 billion in so-called stranded debt.

Households and businesses paid out more than $11.5 billion in a residual stranded debt charge on their electricity bills between 2002 and 2014 -- the last year for which statistics were available -- with the outstanding balance still over $2.5 billion.

"For years we were collecting a debt retirement charge but we never retired any," said Bryne Purchase, an associate professor of economics at Queen's University and a former deputy minister of finance under the Tories.

"This is the sleight of hand," added Purchase, who was also deputy minister of energy under the Liberal government.

"They never crystallized those numbers, never said 'this is how much we're going to collect and once we've collected that we can retire the debt retirement charge."'

When Ontario Hydro was broken up, the government expected $13.1 billion in revenues and payments in lieu of taxes from OPG and Hydro One, which reduced the residual stranded debt to $7.8 billion.

A debt retirement charge of 0.7 cents a kilowatt hour was added to all electricity bills starting in 2002, which raised about $940 million a year.

The residual stranded debt, administered by the Ontario Electricity Financing Corp. (OEFC), increased to $11.9 billion in 2004, after the previous Tory government froze electricity prices in May 2002, which the Liberals, who took office in 2003, did not lift until March 2004.

"We have a stranded debt because of mistakes made by the previous Conservative government, frankly," said Finance Minister Charles Sousa.

The rate freeze cost about $900 million, but the government also had to lower its "over-estimation" of expected OPG revenues, adding $4.4 billion to the stranded debt in 2004. It increased again in 2011 to $5.8 billion from $5.4 billion because of lower returns from Hydro One and OPG and because of OPG's high pension costs.

"When the revenues fall, then the residual stranded debt goes up accordingly because they have to make up for the difference," said Sousa.

Energy sector analyst Tom Adams said "there's no way to confirm the truth or otherwise" about the government's statements on the residual stranded debt.

"There's a huge transparency problem here," said Adams. "The key missing ingredient is the underlying financial plans behind their projections around the date when the residual stranded debt will be paid off."

The government did not issue a single update on revenues raised by the charge on hydro bills until 2012, when it reported the residual stranded debt was $4.5 billion. The law required only that the finance minister determine the amount of stranded debt "from time to time" and make that determination public.

The auditor general reported the Electricity Act allows the OEFC to use the debt retirement charge "for any of its responsibilities for servicing and managing the stranded debt, and not just for the retirement of the residual stranded debt."

"It's a giant slush fund effectively," said Purchase. "Lots of other liabilities have been added in as a result of various manipulations the government has made."

Sousa denied the costs of other projects were added to the stranded hydro debt, but the Opposition said enough was collected over the years to have paid off the debt in 2011 and eliminate the charge on electricity bills.

"In reality, the Liberals were collecting the money, saying they were paying off the debt, but were using it to pay for other things," said interim Progressive Conservative Leader Jim Wilson.

NDP energy critic Peter Tabuns said even members of the legislature can't determine if other debt was added to the hydro file, and perhaps the auditor general should review the matter.

The Liberals plan to remove the debt retirement charge from household electricity bills on Jan. 1, 2016 -- business and industrial customers will keep paying it until 2018 -- which will eliminate hundreds of millions of dollars in annual revenue.

"The only way they're going to be able to keep OEFC able to service its bond obligations is to create a new electricity tax," predicted Adams.