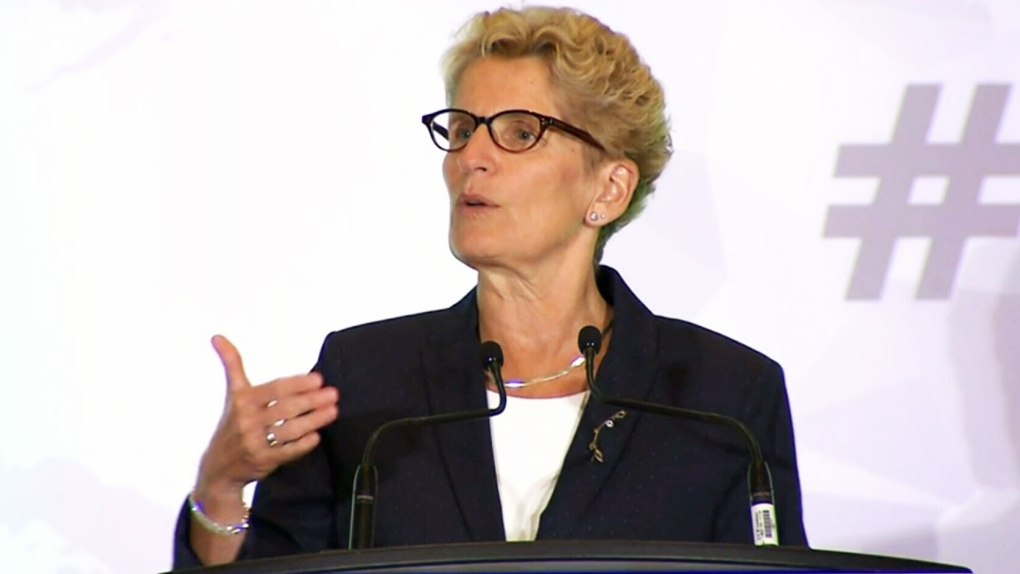 TORONTO -- Ontario Premier Kathleen Wynne has frequently waded into federal politics through clashes with Stephen Harper, but in the midst of a federal election campaign she isn't easing off -- she has jumped in with both feet.

Wynne has been actively campaigning for federal Liberal Leader Justin Trudeau, but nearly as often she promotes her federal counterpart she slams the prime minister, which could be seen as payback for Stephen Harper's attacks against her in last year's provincial election.

"I've been quite clear that we need a new government, that this government has not worked well with the province of Ontario, and I've been clear about that for some time," Wynne said Wednesday.

"I've also been clear that I support Justin Trudeau, and I will continue to look for a partner at the federal level that is bringing forward polices that will make sense for the people of Ontario."

Far from being content to merely deflect Wynne's barbs, Harper has gone on the offensive against the Liberal premier at many a campaign stop. The Conservative leader took the unusual step last week of returning to the microphone after reporters had asked all their questions because no one had raised the Ontario pension plan.

"I am delighted to see that our refusal to co-operate with the imposition of this tax is making it more difficult for the Ontario government to proceed," he said.

Harper used Wynne's pension proposal as the basis to attack his Liberal and New Democrat rivals again Wednesday during a campaign stop in London, Ont.

"I find it appalling that people who have demonstrated they cannot run the finances of the government think they are going to better run our own retirement finances for us."

The war of words between the two leaders has been ongoing long before the campaign, but it seems to have escalated the day Harper called the election. Wynne telephoned reporters to lash out at his Conservative government for not co-operating with her government on several issues, especially the proposal for a provincial pension plan.

"It's really, in my opinion, pretty unprecedented and mean-spirited in a pretty big way," Wynne said on Day 1 of the campaign about Harper's refusal of any federal help to create the Ontario pension plan, which he calls a job killing payroll tax.

Wynne and her cabinet ministers have also been using social media including Twitter to attack the New Democrats and urge Canadians to defeat the Conservative government.

The Liberal premier complains that Harper refused to call First Ministers' meetings and says he never even talked with the provinces about Senate reform before acting in an "almost petulant" manner to announce he would refuse to fill any Senate vacancies.

It's not unprecedented for provincial premiers to launch attacks against a federal government during an election campaign.

Former Newfoundland and Labrador Premier Danny Williams launched an "Anything But Conservative" campaign against Harper in 2008 which led to the Tories being shut-out in the province even as they won a majority government nationally.

It's difficult to understand the Conservatives' strategy of engaging Wynne, but perhaps it's personal between her and Harper, suggested Barry Kay, an associate professor of politics at Wilfrid Laurier University in Waterloo.

"Maybe the personal animosity between Wynne and Harper -- whatever triggered it -- is governing both their behaviours," Kay said in an interview.

Wynne has made several campaign appearances alongside Trudeau, talking up his policies and promised co-operation with the provinces, and urging voters to defeat the Conservatives. However, Kay cautioned her involvement could backfire on the federal Liberals if Ontario teachers go on strike before the Oct. 19 vote.

"I don't think there's a huge number of Ontarians that think they have to vote for this party or that party because there's going to be more pension money coming, but with the teachers and a strike, that could be a factor," he said.

Provincial issues don't tend to have a huge impact on federal elections unless the government is especially unpopular, added Kay.

"She certainly wants to score points with the federal Liberal party and have Justin Trudeau owe her, and he will (if the Liberals win)."

The Ontario premier broadened her attacks this week to target Tom Mulcair as well, saying the NDP leader's ideas for a $15 minimum wage and $15-a-day child care are either incomplete, unworkable or impossible to implement.

Wynne insisted she was being consistent in asking for a new federal partner, a point she said she's been making since becoming premier.

"The difference this year is that we're in the midst of a federal election campaign and so that message is even more relevant because there is an opportunity to do something about that," she said.