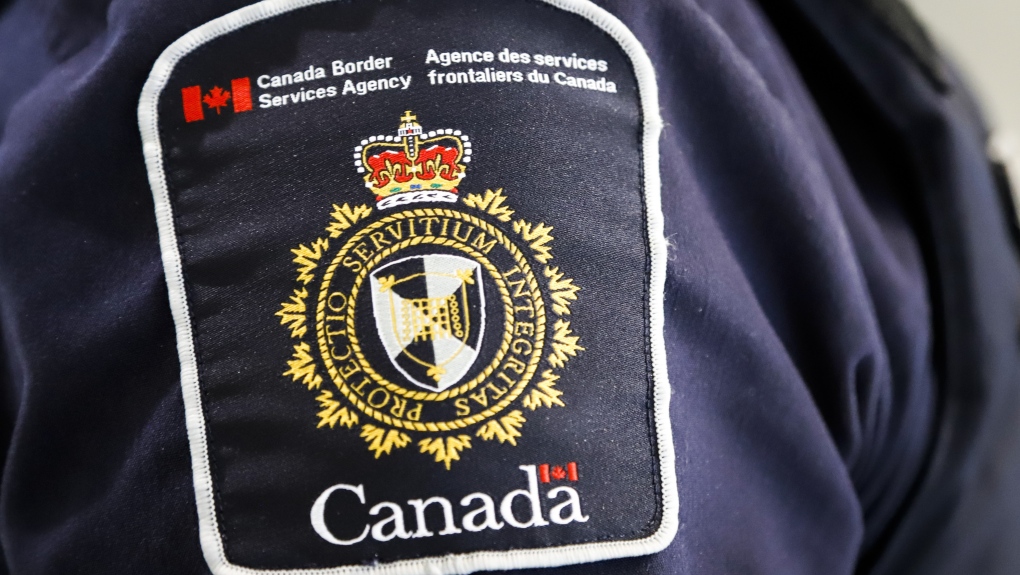 FILE - A Canada Border Services Agency (CBSA) patch is seen on an officer in Calgary on August 1, 2019. (THE CANADIAN PRESS/Jeff McIntosh)
OTTAWA -

Of these respondents, 71 per cent suggested the discrimination was based, in full or in part, on the travellers' race, and just over three-quarters cited their national or ethnic origin.

The figures are drawn from a survey conducted as part of an internal Canada Border Services Agency evaluation that looked at how the agency processed travellers, using a lens of gender, race, ethnicity, religion, age, and mental or physical disability, and the interaction between these factors.

The agency recently posted the results of the evaluation, which focused primarily on people flying into Canada, on its website.

As part of the research, 922 border services officers and superintendents were surveyed from March 2 to 22, 2020.

Of those who said they saw a colleague engage in discrimination, just over two in five did not report what they observed. Some mentioned fear of reprisal or simply feeling uncomfortable.

Sixteen per cent of those who witnessed discrimination reported what they saw. However, some of these respondents indicated that they faced challenges in doing so or that their reports were not taken seriously or acted on, the evaluation report says.

The CBSA's traveller processing activities do not intentionally set out to target people based on perceptions around their race or ethnicity, the report says. The agency uses a combination of information sources, such as global trends and reports, in the development of scenarios, which are systematically reviewed for human rights and other considerations.

"However, certain practices can have unintended consequences that result in the overrepresentation of racialized communities in the law enforcement context," the report says.

For example, when targeting rates are higher for certain origin countries, there could be unintended consequences for travellers of specific racial or ethnic groups when those groups make up a larger proportion of incoming travellers from those countries, it adds.

The reviewers found the agency could conduct only "very limited analysis" based on travellers' racial or ethnic identities when using operational data.

"If faced with public complaints or claims of racial discrimination, the agency can neither prove nor disprove with its data whether its policies or practices discriminate against travellers, due to the complexity of this issue. If the agency were to attempt this type of analysis in the future, it would have to consider and develop new approaches on data collection, storage and analysis."

The CBSA People Processing Manual provides personnel with guidance concerning awareness of a traveller's culture, a prohibition on racial profiling and services provided to those with disabilities.

A large majority of survey respondents said they agreed or somewhat agreed that in order to do their jobs effectively, they need to recognize their personal and implicit biases.

The evaluation makes several recommendations, including a call to develop and implement a plan to improve the awareness and reporting of mistreatment and discrimination of travellers witnessed by border agency personnel, without fear of reprisal.

In a response included with the evaluation report, the border agency agreed to devise such a plan and set out a timetable to put changes in place this year.

This report by The Canadian Press was first published Aug. 16, 2022.

Hurricane Ian carved a path of destruction across Florida, trapping people in flooded homes, cutting off the only bridge to a barrier island, damaging a hospital from above and below and knocking out power to 2.5 million people as it dumped rain over a huge area on Thursday.

'Patience is wearing thin,' for Maritimers who question if utilities ready for storms

Some Maritimers who lost power for days after post-tropical storm Fiona are questioning whether power utilities have properly prepared their grids for the powerful storms that are increasingly battering the region.

NATO said Thursday it would retaliate for any attacks on the critical infrastructure of the 30-member-countries organization as it suggested that damage to two gas pipelines off Denmark and would-be member Sweden in international waters in the Baltic Sea is the result of sabotage.

Russia on Friday will formally annex occupied parts of Ukraine where it held Kremlin-orchestrated "referendums" in which it claimed that residents had voted overwhelmingly to live under Moscow's rule. The Ukrainian government and the West have denounced the ballots as illegal, forced and rigged.

The Canadian economy grew slightly in July with the latest reading on real gross domestic product coming in higher than expected.