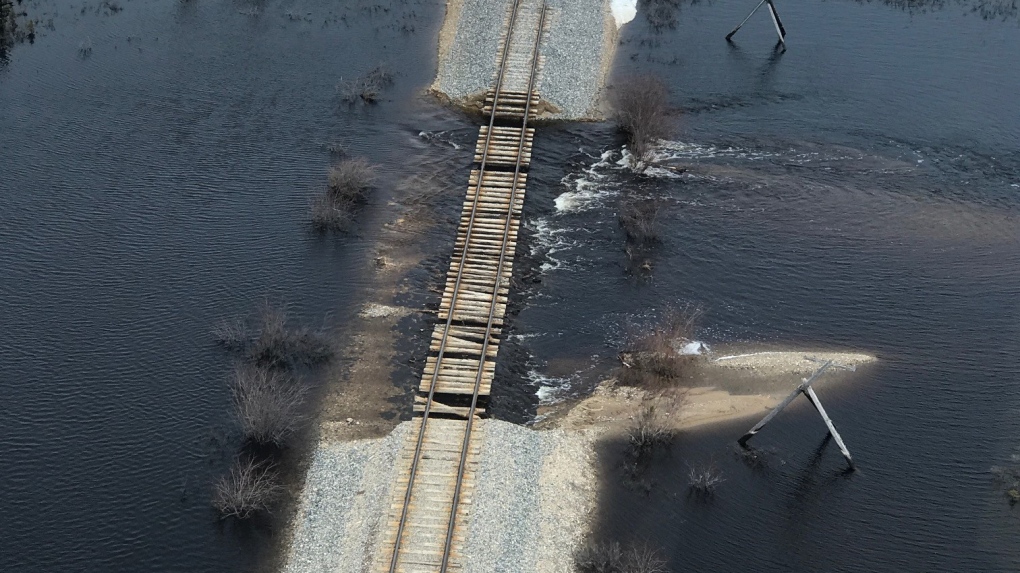 An undated image provided by OmniTRAX shows flood damage along the railway line to Churchill, Man.

OTTAWA -- The federal government laid down an ultimatum Friday to the U.S. company that owns the only rail line serving the isolated northern Manitoba town of Churchill: Fix it or sell it to someone who will.

If they sell, Ottawa is prepared to help with interim funding to fix the rail line, said Natural Resources Minister Jim Carr.

Omnitrax's Canadian CEO applauded the move, saying the company already has an agreement in place to sell the rail line to a consortium of First Nations and the deal has only been awaiting federal support.

The news suggests an end is near for the months-long ordeal that saw the 900 residents of Churchill cut off from their main supply chain for food and fuel.

"This is a very positive development," said Churchill Mayor Mike Spence, who is part of one of the groups poised to buy the rail line.

"This is exactly what we've been talking about."

The Ottawa plan includes telling Omnitrax that if it refuses to honour its commitment to maintain the line, Ottawa will help facilitate the sale to a new owner, as long as that owner pays a reasonable price, has support from First Nations along the line and has a viable business plan.

If those conditions are met, Ottawa will help with interim funding to fix the line so it can get up and running before winter hits. It did not say how much it would be prepared to pay or what the conditions would be for the funding.

"Time is of the essence here and quick action from all parties is needed now," said Carr in a news release.

Churchill, which sits on the shore of Hudson Bay and is best known for its polar bears, has no permanent access road. The 820-km rail link to The Pas is its main source for all its supplies. Major flooding in the spring washed out at least 20 sections of the line.

Last week, an engineering assessment estimated it would cost $43.5 million to fix.

The federal government has repeatedly said Omnitrax is obligated to fix the line under a 2008 agreement that saw Ottawa offer financial help to the company in exchange for Omnitrax maintaining the rail link until at least 2029.

Omnitrax, which has owned and operated the line since 1997, says it can't afford the repairs and argues the 2008 agreement is no longer applicable because of events since then, including the closure of the Canadian Wheat Board, which used to be the main customer for the Port of Churchill.

That stalemate went on all summer. But now, the chips are falling into place to see it end.

The two separate groups competing to buy the line joined forces last week, removing one of the stumbling blocks to progress.

Now the merged group, which includes two northern Manitoba First Nations and Mayor Spence, are working on their plan to be ready to buy the line and the Port of Churchill, which Omnitrax also owns.

Omnitrax Canada CEO Merv Tweed, a former Conservative MP from Manitoba, said the company is "pleased" Ottawa has offered to pay for the repairs and support the consortium's efforts to purchase the line.

"We have come to a fair and reasonable agreement to transfer the assets to the Missinippi Consortium and our mutual agreement is waiting only for federal government support," he said in a written statement.

Ottawa has appointed former Privy Council clerk Wayne Wouters as its chief negotiator to bring everything together.

Spence said although winter is fast approaching, he believes there is enough time to get the deal done and make the repairs before ice and snow halt construction until spring.

"We've got some work to do but we're up to the challenge," he said.

Churchill has been reeling since Omnitrax said last year it was no longer financially viable to operate the port, shutting down one of the biggest employers in town.