From top politicians to influential oligarchs and media figures, Canada has slapped sanctions on high-profile Russians, including President Vladimir Putin, as he continues his unjustified and deadly attack on Ukraine.

In light of the current invasion, the government has targeted those who federal officials say have enabled Putin and this war, with financial and other penalties.

This builds on the multiple rounds of sanctions and other responsive measures Canada has imposed on Russia since its 2014 occupation and annexation of Crimea.

In an immediate response to the 2022 attacks on Ukraine, Canada updated its sanction list twice. First, to add 351 members of the state Duma, a handful of entities, and to impose new prohibitions on Russian sovereign debt. In the second instance, another 31 individuals and 19 entities were sanctioned.

Then, moving in lockstep with other allied countries, Canada continued to add to its sanctions list in smaller and often more thematically-targeted batches.

This has led to Canada imposing sanctions on hundreds of individuals and entities from Russia since the outset of the invasion of Ukraine.

Imposed under the Special Economic Measures Act—which has also been used to ban Russian ships, ban providing insurance for any Russian aircraft, and halt Russian bank transactions in Canada—the federal government has pledged that more sanctions will come until Russia stops committing “atrocities” and leaves Ukraine.

So who has been hit by these asset freezes and other prohibitions? CTVNews.ca has dug through the list to figure out who is who.

THE POLITICOS AND SENIOR OFFICIALS

In addition to sanctioning Putin directly in late February, Canada has targeted more than a dozen top government and political officials in Russia, as well as former players and their close associates.

This has included sanctioning Putin’s chief of staff Anton Vaino as well as Russian Prime Minister Mikhail Mishustin and his deputy Yury Trutnev.

Canada has also levied sanctions on the Mayor of Moscow Sergei Sobyanin, Russia’s former president and current deputy chair of the Security Council of Russia Dmitry Medvedev, as well as Chairperson of the Central Election Commission of the Russian Federation Ella Pamfilova.

Ahead of Ukrainian President Volodymyr Zelensky’s address to Parliament on March 15, Canada announced it was hitting another 15 Russian government “elites,” including high-ranking Russian naval and army officials, as well as Russia’s economic development minister Maxim Reshetnikov, and deputy prime minister of the Russian Federation Dmitry Grigorenko.

THE OLIGARCHS AND INDUSTRY GIANTS

In addition to putting direct pressure on Putin’s political inner circle, Canada has attempted to pressure Putin through some of his closest allies among Russia’s elite.

This has included imposing sanctions on a number of that country’s powerful oligarchs who used personal connections after the collapse of the Soviet Union to take over previously state-owned industries to profit from Russia's new capitalism.

Russian billionaire Oleg Deripaska is one of the latest wealthy Russians to be targeted, despite recently calling for peace. At one point the richest person in Russia, Deripaska is the founder of Basic Element, a Russian industrial group with stakes in aluminum and other sectors, according to Forbes. 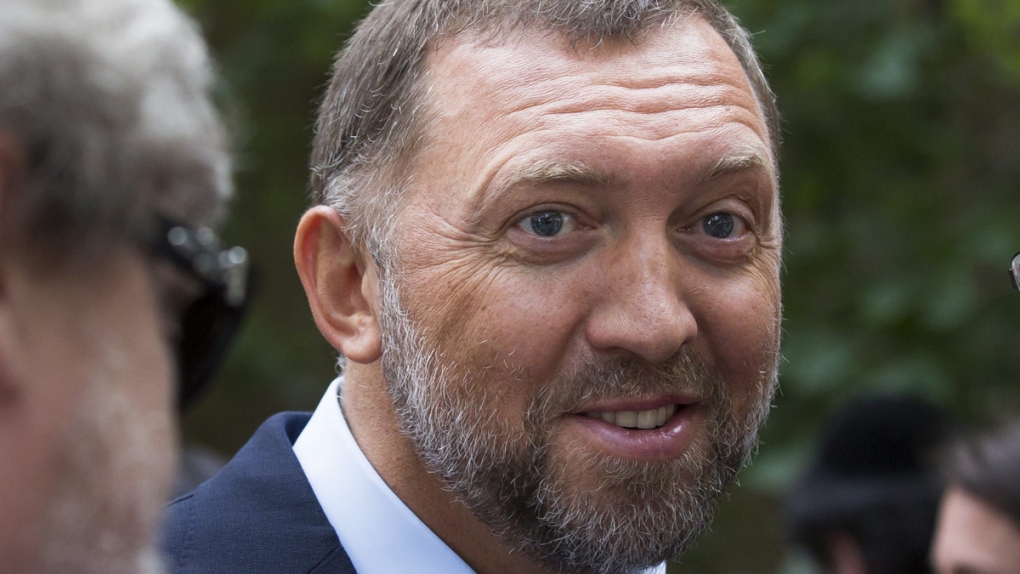 Another sanctioned oligarch is former KGB agent Sergei Chemezov. He is the CEO of state-owned defence conglomerate Rostec and has about $400 million worth of assets, including a real estate company in Ireland and a superyacht, according to Pandora Papers documents.

Nikolai Tokarev is among those who have been sanctioned. He is president of Transneft, a state-owned pipeline transport company responsible for transporting 90 per cent of Russia's oil, according to the U.S. Treasury Department. He also served alongside Putin in the KGB during the 1980s.

Another sanctioned oligarch with ties to Putin is Yevgeny Prigozhin of the Internet Research Agency (IRA), which has also been described as a “Russian troll farm,” according to Reuters. The FBI have accused Prigozhin of allegedly interfering in the 2016 U.S. presidential election.

The Rotenberg brothers – Boris and Arkady – have also been sanctioned. They own Russia's SMP bank and oversaw construction of a bridge between Russia and Crimea in 2018. Other members of their family have also been added to Canada’s sanctions list, including Boris’ wife Karina and Arkady’s hockey-player son Pavel.

In early March, Canada moved to sanction another 10 energy sector executives: Seven from Moscow-based oil giant Rosneft, and a trio from Gazprom, a largely state-owned natural gas corporation headquartered in Saint Petersburg that the Rotenberg family has ties to.

Then, at the tail end of his trip to Europe, Prime Minister Justin Trudeau announced that Canada would also be sanctioning billionaire Roman Abramovich, owner of the Chelsea Football Club and a major shareholder in multinational manufacruring company Evraz.

It’s been reported that both men have superyachts that are in the crosshairs of sanctions from European countries.

Mariya is a doctor who, according to the U.S. government, "leads state-funded programs that have received billions of dollars from the Kremlin toward genetics research and are personally overseen by Putin.” Katerina has been described as a “tech executive whose work supports the GoR [Russian government] and defence industry.” 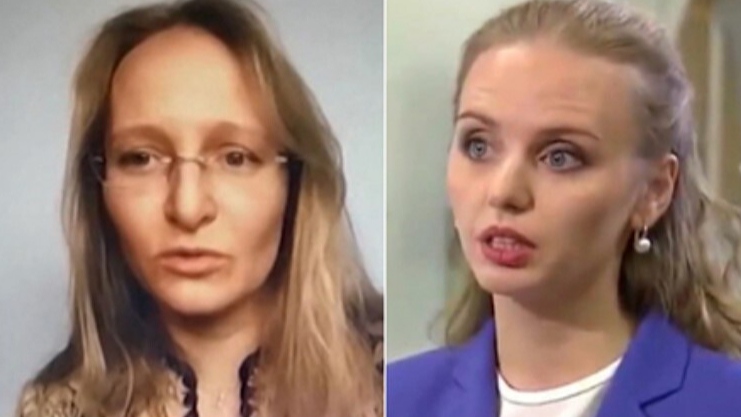 Putin rarely speaks about his daughters, their identities have never been confirmed by the Kremlin, and neither woman has confirmed publicly that the Russian leader is her father.

The government has also gone after what they have described as “agents of disinformation.”

This has included adding Putin’s press secretary Dmitry Peskov to the sanction list, as well as editor-in-chief of state-television network RT Margarita Simonyan. 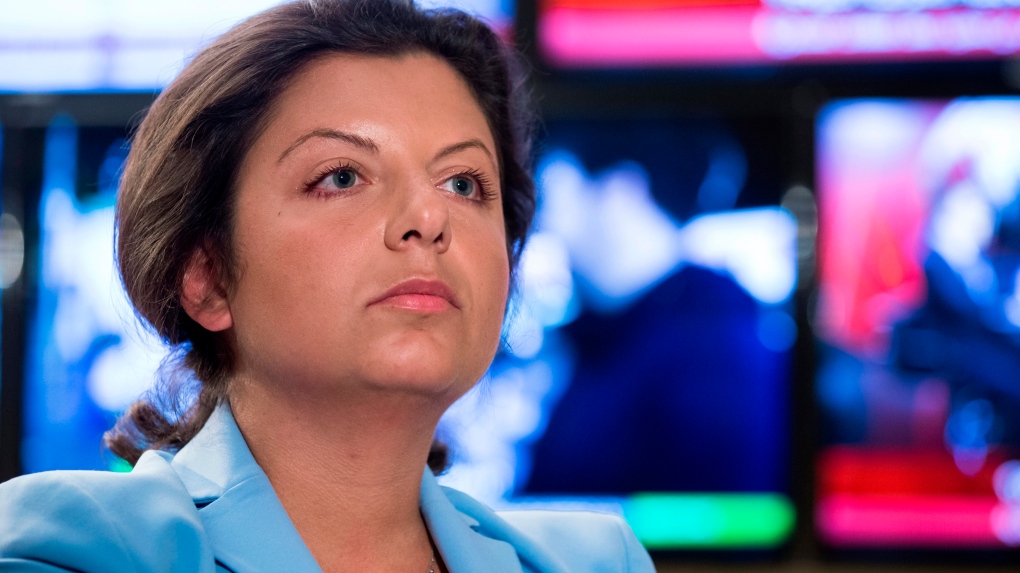 In this Jan. 19, 2018, file photo, Margarita Simonyan, the head of the Russian television channel RT, listens to a question during her interview with the Associated Press in Moscow, Russia. (AP Photo/Alexander Zemlianichenko, File)

In this Jan. 19, 2018, file photo, Margarita Simonyan, the head of the Russian television channel RT, listens to a question during her interview with the Associated Press in Moscow, Russia. (AP Photo/Alexander Zemlianichenko, File)

Canada has sanctioned Vladimir Kiriyenko, the CEO of VK Group, a major internet provider in Russia known for the VKontakte social network, essentially Russia's version of Facebook, according to Reuters.

CEO of Channel One Russia Konstantin Ernst and TV host Vladimir Solovyov have also been sanctioned.