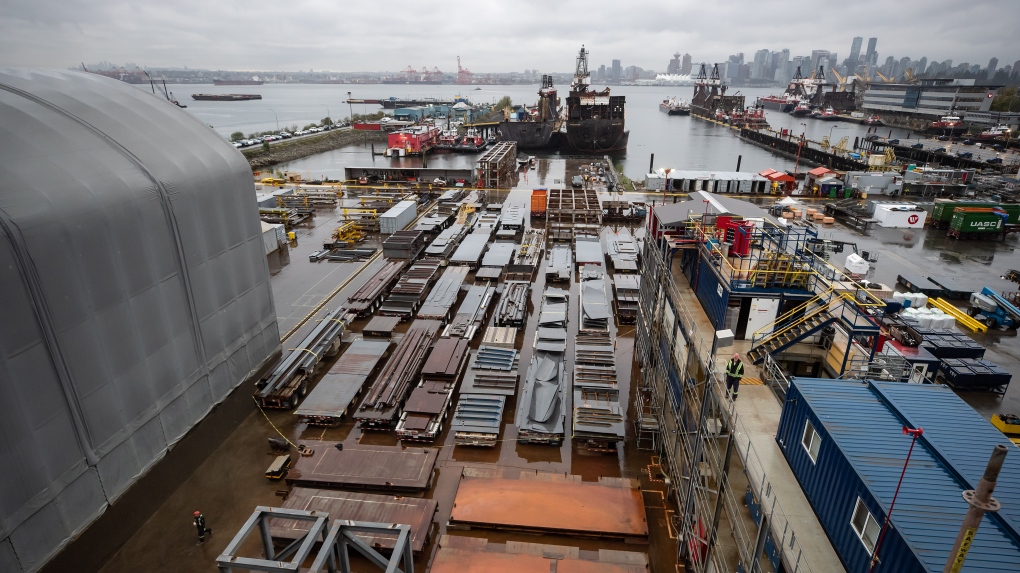 OTTAWA -- Canada's top military procurement official says there are no plans to change directions on the construction of a fleet of new Navy warships despite a recent warning about escalating costs from Parliament's budget watchdog.

In an exclusive interview with The Canadian Press, Troy Crosby, the assistant deputy minister of materiel at the Department of National Defence, said he remains confident in Ottawa's estimated price tag for the 15 vessels.

And he suggested switching things up now to save money would only lead to delays and undercut the Navy's ability to protect Canada.

"The solution that we have will deliver the equipment that the Navy and Canada require for its surface combatants for the long term," Crosby said. "We're going to do the best we can to deliver that in as timely a fashion as possible so the Navy gets the ships it needs."

Crosby's comments come about a month after parliamentary budget officer Yves Giroux released a report predicting another multibillion-dollar cost increase in what is already the largest military procurement in Canada's history.

While the government says the warships will cost up to $60 billion, Giroux put the figure at more than $77.3 billion.

The vessels were supposed to cost $26 billion when the project to replace the Navy's frigates and destroyers was launched in earnest a decade ago.

Despite the parliamentary budget office's demonstrated track record of predicting such costs over the years, Crosby was adamant about the accuracy of the government's current figure, which was set in June 2017.

"They use a different model than we do, which is okay, it does provide a comparison," he said. "But we're confident in the estimates that we wrote."

Crosby also stands by the government's estimates despite recent revelations that the first of the warships, which will be based on the British-designed Type-26 model that has yet to be built by any country, won't arrive until at least 2030. That is years later than expected.

Officials previously questioned Giroux's figure, suggesting he put too much emphasis on the ship's weight in his calculations and included tax, which they say the government doesn't have to pay.

Crosby also noted the $60-billion figure includes contingency funds, adding his confidence in that number is based on having more understanding about the project as it has moved from an abstract idea over the years to a real design.

"We've got far more facts to be able to bring to the cost estimating," he said. "Information brought to us by the contractors, and the experience they've got internationally on the Type-26 program, for example, that can all be brought into our own estimating work now."

Giroux and his team also looked at the idea of a hybrid fleet, in which Canada builds three Type-26 ships and supplements them with 12 other vessels. That would mimic how the Navy was previously built, with three destroyers and 12 frigates.

To that end, the PBO found that the government could save $40 billion if it built only three Type-26 frigates and supplemented them with 12 smaller, less capable Type-31s, which is similar to what Britain has decided to do.

Canada could also save $50 billion if it scrapped plans to build any Type-26s and went with an entire fleet of Type-31s, according to the report, though the PBO noted the Type-31 was "designed to operate alongside the `higher-end' Type-26."

It also found that launching a competition to select a new design could delay delivery of the first ship by four years.

One area where Crosby would concede concern was around whether the Halifax shipyard and its counterpart in Vancouver, which is building two Navy support ships alongside several vessels for the Canadian Coast Guard, have enough staff to get the job done.

Potential staffing shortages, as well as the need for more government officials to oversee the shipbuilding projects, were highlighted in a recent report by the federal auditor general.

"There isn't sufficient workforce to do all of the work that needs to be done, but that's okay because the work doesn't need to be done today," Crosby said. "It's certainly something that we keep an eye on for ourselves as well."

He also suggested some of the projects already underway, most of which are behind schedule, could face further delays as shipyards have been forced to scale back work and otherwise adapt to COVID-19.

"COVID has caused a challenge in the yards," he said. "The full consequences of COVID will be clearer over time."

This report by The Canadian Press was first published April 4, 2021.