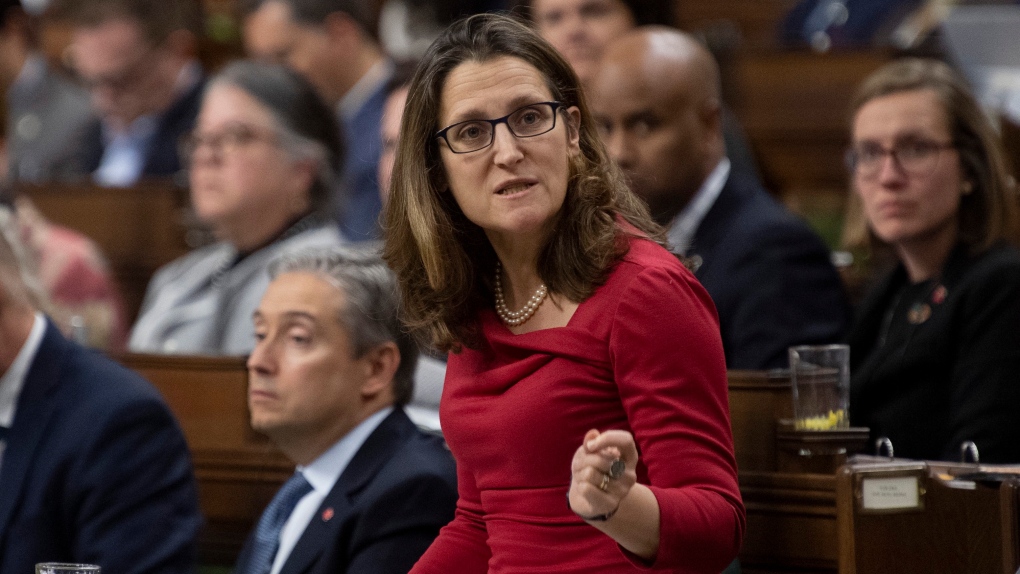 Deputy Prime Minister and Minister of Intergovernmental Affairs Chrystia Freeland responds to a question during Question Period in the House of Commons Thursday, February 6, 2020 in Ottawa. THE CANADIAN PRESS/Adrian Wyld

OTTAWA -- The new NAFTA implementation bill passed the first legislative stage in the House of Commons with the backing of the Conservatives, New Democrats and Greens.

Outgoing Conservative Leader Andrew Scheer, NDP Leader Jagmeet Singh and Green parliamentary leader Elizabeth May voted with the Liberals, in favour of moving the deal ahead, while Bloc Quebecois Leader Yves-Francois Blanchet and his caucus did not support what's legislatively titled Bill C-4.

Deputy Prime Minister Chrystia Freeland introduced the bill a week ago and MPs spent time nearly every day since debating it at second reading stage. It is now being sent to the House International Trade Committee for further study.

The committee has already begun hearing from witnesses offering stakeholder testimony on the reworked trilateral trade deal and is accepting online submissions.

"Canada is a trading nation and determining how trade arrangements can affect that trade is of critical interest to us as a committee and as a country," said Liberal MP Judy Sgro, chair of the committee.

After the committee stage, the bill will have to be debated and voted on again in the House of Commons before moving into the Senate for another round of consideration.

Canada remains the last country to ratify the agreement.