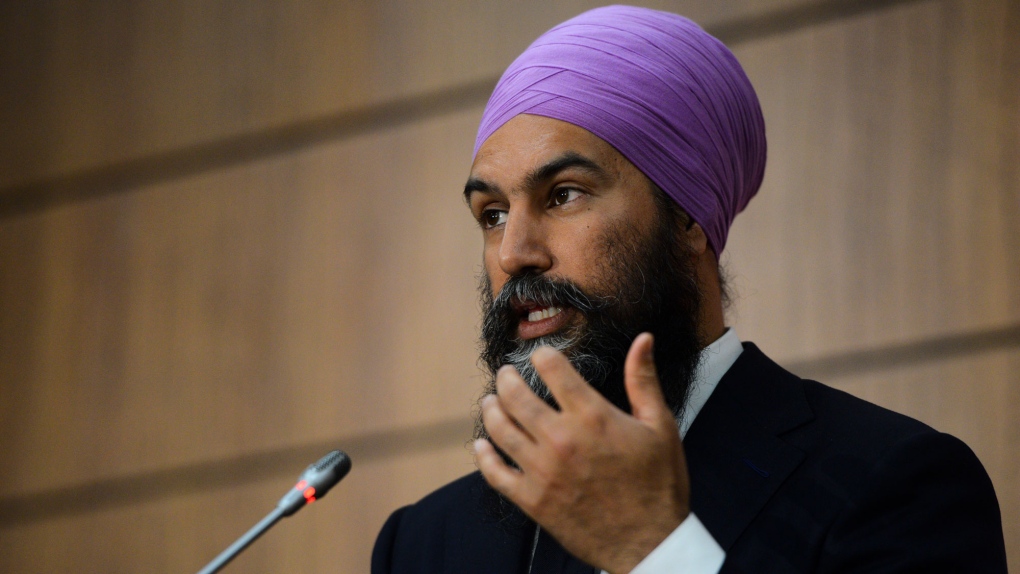 NDP Leader Jagmeet Singh speaks during a press conference on Parliament Hill amid the COVID-19 pandemic in Ottawa on Wednesday, June 10, 2020. THE CANADIAN PRESS/Sean Kilpatrick

OTTAWA -- New Democrats reconvened Saturday for the second day of a national policy convention as they struggled to push past the hiccups and frustrations of the virtual event's opening sessions and rally around keynote speaker John Horgan.

The premier of British Columbia, and the only NDP leader who currently heads a government, kicked off the proceedings by citing B.C. as proof positive that Canadians are ready to see New Democrats in power.

"What we demonstrated in British Columbia is you can govern like New Democrats," he said, stressing the B.C. and federal parties' role in shoring up pandemic relief such as paid sick leave.

"Let's say to those parties that like to campaign as New Democrats, 'Get out of the way, we're already here."'

Horgan addressed more than 2,000 delegates assembled via screens around the country who sought to debate resolutions on social security, green programs and issues of human rights and discrimination.

But glitches, delays and accusations overshadowed much of that back-and-forth throughout the first two days of the convention, occasionally threatening to sideline policy discussions.

Meanwhile a resolution that demands Canada suspend arms dealing with Israel and halt trade with Israeli settlements passed with 85 per cent support, but drew controversy as well.

Only seven of the 80 resolutions on deck made it past the slog of amendments and procedural holdups to the virtual floor for debate. In contrast, more than two dozen non-binding resolutions were endorsed at the simultaneous Liberal convention on Saturday morning alone.

Nonetheless, six of the seven NDP policies passed with at least 95 per cent support, restoring a sense of cohesion following testy exchanges.

Delegates complained some meetings lacked closed captioning, sign language and translation services, prompting an apology from organizers. Others criticized party brass for assigning only 40 minutes of debate for each set of 20 policy proposals -- there were seven sets, arranged by category -- plus a 20-minute block to vote online.

"I'm extremely disappointed with the way things are going," one delegate told convention co-chair Jeremy Boulanger-Bonnelly. "This is not working."

"It's been a complete mess, everything from interpretation to reading from the wrong resolution," he said.

Pearce requested the entire event be postponed -- one of several such demands -- "because the party is clearly unable and too incompetent to be able to pull this off."

That sparked backlash from another delegate, further bogging down the process.

Divisions between the grassroots and party brass also bubbled up, revealing tensions over how far left the party can veer without losing its shot at power.

"We are going to fight systemic racism through more policing???" McLean asked Saturday on Twitter.

An NDP motion in the House of Commons received all-party support last month to create and fund dedicated hate-crime units and host a federal-provincial meeting on the problem.

The Israel-Palestine resolution, which calls for "an end to Israeli occupation of Palestinian land," echoes a similar proposal that failed to reach the floor at the last New Democrat policy convention in 2018.

Shimon Koffler, president of the Toronto-based Centre for Israel and Jewish Affairs, said it reveals "a toxic obsession with Israel" that ignores catastrophes unfolding in Syria, Myanmar, Hong Kong and elsewhere.

Advocacy groups including Independent Jewish Voices Canada and the Canadian Foreign Policy Institute congratulated New Democrats for the move, which they said holds Israel accountable for violations of international law in spite of pressure from anti-Palestinian organizations.

A sweeping proposal to create green jobs and cut emissions passed with 97 per cent support Saturday, but only after an amendment opposing all new fossil-fuel projects narrowly failed.

"We are not going to be able to make the changes we need for a green recovery if we do not have support in provinces like Saskatchewan and Alberta and British Columbia," said delegate Andrew Mackenzie, a United Food and Commercial Workers union representative.

"This is a political party, and there are times we do need to think politically."

Horgan seemed to anticipate the friction earlier in the afternoon, saying that arguments are a "good thing."

"That's why we are a fresh and robust party, because we take these things head on," he said. "We argue with each other to come to the best possible outcomes."

Horgan, who took the helm of a minority government in 2017 and won a majority last October, encouraged the rank and file to keep pushing for better health care, affordable housing and national child care -- a notion proposed repeatedly by the Liberals starting in 1993, but never realized.

On Friday, delegates voted in favour of the only two resolutions that reached the floor, committing to raise the federal minimum wage to $20 and impose a one per cent tax on fortunes over $20 million.

Delegates also passed resolutions to address boil-water advisories in Indigenous communities and stand up for Indian farmers suffering "human rights abuses" by that country's government amid protests against its new farming laws.

Singh aims to rally the base with a keynote speech Sunday, hoping to light a fire despite pandemic burnout and the dearth of drum-beating and spectacle that typically attend an in-person political convention.

This report by The Canadian Press was first published April 10, 2021.