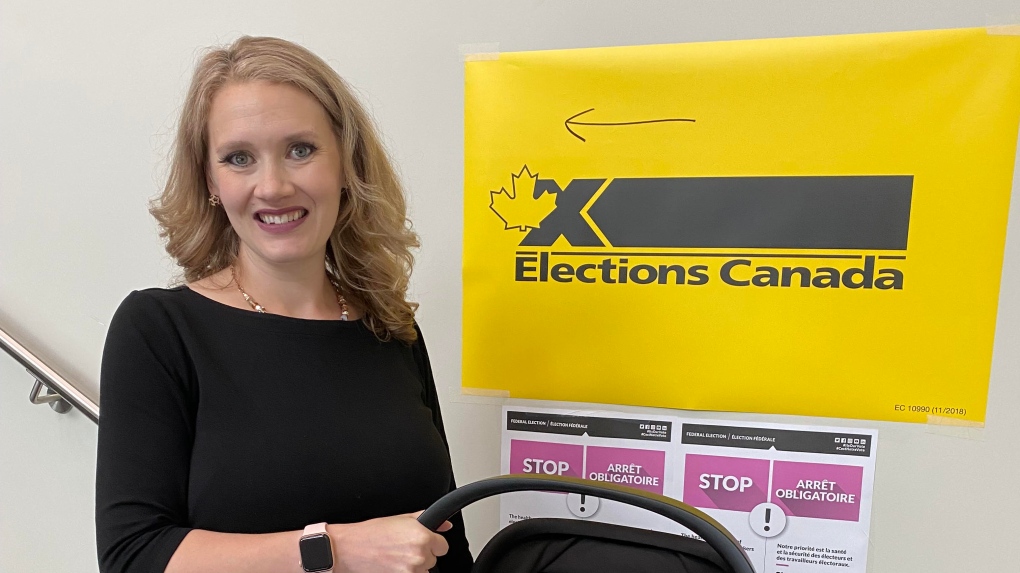 OTTAWA -- Laila Goodridge, the newly elected Conservative MP for Fort McMurray—Cold Lake, says changing the narrative around Canada’s oil and gas sector is of utmost importance to her as she takes on her new role in Ottawa.

Goodridge has called Fort McMurray home her entire life. Her dad’s family moved there in the 1970s to make a better life for themselves. Both her grandfather and dad worked in the oil sands.

Goodridge, too, worked for mining giant Syncrude as a student through university and then for North American Construction Group in health and safety for nearly five years after graduation.

“I love the innovation and ingenuity of the oil sands. They have provided so much opportunity for my family and so many others over the years,” she told CTVNews.ca.

Goodridge says she’s always had a keen interest in politics and was a member of the Conservative Party since its inception.

In 2018, she was elected as a United Conservative MLA in the Fort McMurray-Conklin riding. A year later, she won her second election, this time in the newly formed Fort McMurray-Lac La Biche riding.

The Alberta government named the bilingual Goodridge as the parliamentary secretary for the Francophonie, aimed at ensuring the implementation of Alberta’s French policy.

Alberta Premier Jason Kenney congratulated his former teammate on her appointment as the federal Conservative Fort McMurray-Cold Lake candidate, praising her dedication to her community.

“Laila is a true champion for her city and was a relentless advocate for her constituents as an MLA on issues like health care, child care and economic growth,” he wrote on Facebook on Aug. 15.

Goodridge says she’s hoping to showcase her home town to her new colleagues in Ottawa.

“As the newly elected member of Parliament, I’m excited to be able to show my home town, the community that I absolutely love, to politicians from all different political parties to clear up some of the misconceptions that sometimes exist around the oil sands,” she said.

“As someone who grew up here, I live 10 minutes away from the home that I grew up in, that my dad bought from my grandparents. There are people who have roots, it’s not just a boomtown, it’s a home town.”

Goodridge is one of 50 rookie MPs elected in the 2021 federal election. CTVNews.ca is profiling five—one from each party with a seat in the Commons— in the lead up to the first sitting day of the 44th Parliament.

Securing a win on election night – she won her riding with 67.8 per cent of the votes – wasn’t her only badge of honour during the campaign.

Goodridge also gave birth mid-way through the campaign, to a baby boy named Eoghan. It’s her and her husband Niall’s first child together.

Being in your childbearing years shouldn't be a detriment to you running for office. Its a necessary perspective that belongs at tables where decisions are being made. I can't wait to get to Ottawa and fight for working mothers and young families. https://t.co/BPt9HzrFQn #Elxn44

Asked how she managed to juggle it all, Goodridge replied: “Because I’m a first-time mom, I don’t have a lot to compare it to, but you know what, it was spectacular. I must give credit where credit is due, I have an exceptionally supportive spouse, wonderful family and friends, and truly the best campaign team anyone could ever ask for.”

She also gave credit to Conservative Leader Erin O’Toole who made sure she was well-supported through the process.

“It was his belief that a pregnant mom could be a candidate, that was really exciting, and his support for working families,” she said, adding that access to child-care services was a major concern she heard about from voters while door knocking.

Goodridge says her perspective as a new mom has helped her prioritize what matters most in life and work.

“You have a finite amount of time as a person, and as a mom that time gets divided a little bit differently, and so it’s about making sure that everything that I’m doing is towards my purpose and my goal,” she said.

“I was ecstatic that she ran for us. There aren’t enough women in Alberta caucus on the Conservative side and now we’ve got a woman who first of all has legislative experience, is dynamic, is a new mom, is bilingual. She’s just going to bring a wealth of experience from an area of the country that really needs a strong voice,” the Calgary Nose Hill MP said.

In a statement to CTVNews.ca, O’Toole said he’s “very excited” for Goodridge to join the team.

“She will be a strong voice for the Conservative Party and the people of her riding. I look forward to seeing the amazing things she will accomplish as a member of Parliament,” he said.

O’Toole welcomed more than just Goodridge on her first official visit to Parliament Hill for the party’s October caucus meeting.

It’s been a busy first week in Ottawa! We’ve had caucus meetings, orientations and get togethers with other MPs. Eoghan has been a real champ attending everything and even got to have a chat with CPC Leader @erinotoole. #cdnpoli pic.twitter.com/G79mPcf1bA

“She’s a huge pickup for our team.”