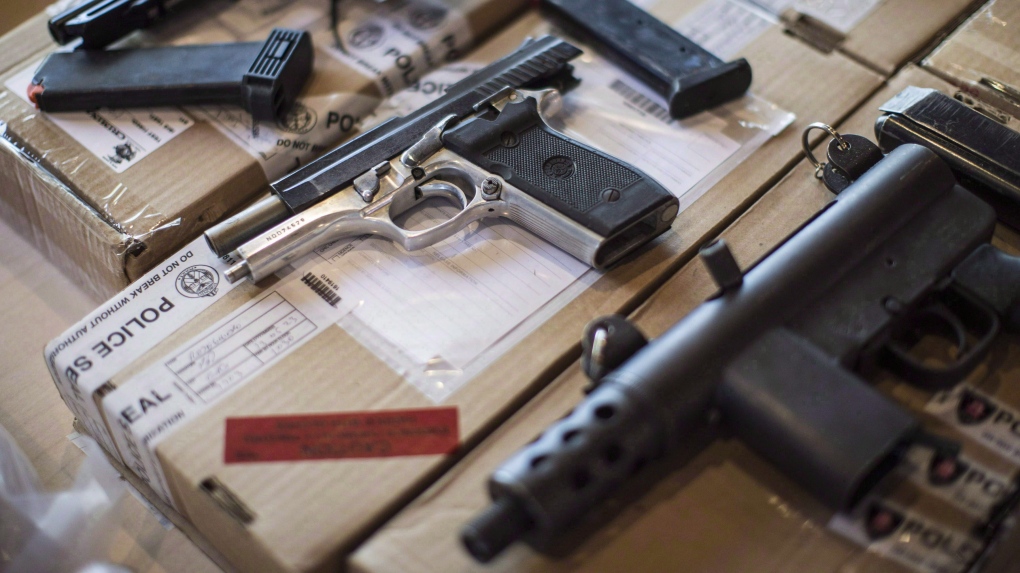 Police display guns seized during a series of raids at a press conference in Toronto on Friday, June 14, 2013. THE CANADIAN PRESS/Chris Young

OTTAWA -- Federal NDP Leader Jagmeet Singh is urging the prime minister to immediately give cities the leeway to ban handguns.

In a lengthy letter Thursday to Justin Trudeau outlining a long-term approach to tackling crime, Singh says simply adding more policing is not a solution to gun violence in cities.

That's because some measures, such as street checks and carding, have amplified distrust between police and racialized communities, Indigenous peoples and those struggling with mental illness.

Instead, he says allowing cities to ban handguns would help municipal authorities deal with the fact that many gun crimes are committed with legal guns.

"The federal government should not stand in the way of municipal leaders who know their communities best, and want to ban these weapons to keep their residents safe," he wrote.

Singh also wants the government to spend $100 million a year, starting next year, on efforts to combat gang violence -- a target the Trudeau government has pledged to reach after 2022. He says this funding should focus on prevention, especially looking at youth gangs, bullying and cyberbullying.

The federal government has said it's considering a number of different ways to crack down on handguns, including giving municipalities the ability to do so.

Bill C-71, introduced late last winter, would expand the scope of background checks on those who want to acquire a gun, strengthen record-keeping requirements for sales and require purchasers to present a firearms licence.

But the government has said it is also actively exploring additional measures, including possibly changing some of the classifications of firearms that would effectively remove some of them from the commercial market.

On Thursday, Public Safety Minister Ralph Goodale's office said the government is looking at a broad range of ideas based on measures that have been most effective around the world.

"The recent shootings in Toronto are senseless tragedies and reminders of the devastating effects of gun violence and criminal activity in our communities. When it comes to keeping communities safe from gun violence, we are open to all options," said Goodale's spokesperson, Scott Bardsley.

"The truth is there's a growing problem with gun crime, especially in Canada's largest cities. This is a dangerous trend, and we must stop it."

The Liberals insist they have made this issue a priority, pointing to the national summit it hosted in March on guns and gangs and proposed legislative changes to gun ownership laws contained in Bill C-71, which has not yet been passed.

"Common-sense gun control that keeps assault weapons and illegal handguns off our streets can and will save lives," Bardsley said.

Federal Conservatives are taking a wait-and-see approach to any move by the government toward banning handguns.

"As the Liberals themselves have suggested, a handgun ban would be a complex legal endeavour," Paul-Hus said.

"We know that whenever the Liberals attempt to curb crime with new gun laws, they always end up targeting law-abiding firearms owners instead of gang members and other criminals who use guns to commit violence."

As for the NDP, Singh is urging Trudeau not only to look at short-term measures on gun control, but to also speak out more loudly against hate crimes and racist confrontations that have emerged "because of misinformed reactions to gun violence."

The root causes of violence -- such as poverty, racial discrimination, gaps in mental health services and a lack of affordable housing -- must also be addressed to reduce the prevalence of marginalized individuals and communities, he said in his letter.

"The primary reason I'm writing to you today is to ask for your commitment to develop long-term and effective solutions to the root causes of gun violence by partnering with the communities affected. That is the only way we can truly tackle the issue of gun violence."

The NDP leader has long been an advocate for steering youth away from crime and gangs and for addressing the root causes of gun violence. During his tenure as a provincial MPP in Ontario, Singh pushed the provincial government to do more to fund youth programs and services that work with marginalized communities following a spate of gun violence in Toronto in 2012.