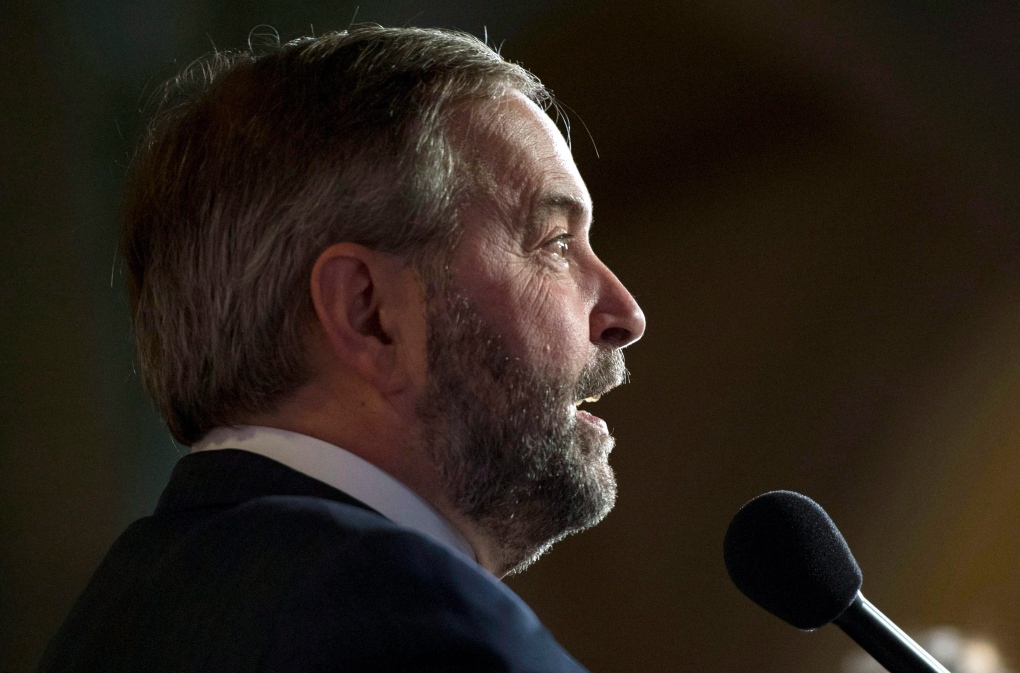 NDP Leader Tom Mulcair speaks to reporters in the foyer on Parliament Hill, shortly after addressing his caucus, on Wednesday, Nov. 4, 2015, in Ottawa. THE CANADIAN PRESS/Justin Tang

OTTAWA -- Donald Trump is a "fascist," according to NDP Leader Tom Mulcair, who criticized Prime Minister Justin Trudeau for not speaking out against the Republican Party leadership candidate.

"Donald Trump is a fascist. Let's not kid ourselves; let's not beat around the bush," Mulcair told supporters in a video released by his party.

Mulcair suggested Trudeau should not shy away from speaking out about Trump.

"I will not hesitate to point out the fact that Mr. Trudeau just shrugs his shoulders when he's asked about Donald Trump and says 'oh, the relationship between Canada and the United States goes beyond any two individuals," Mulcair said in the video.

"I'm sorry, if a fascist becomes president of the United States, I want to be on record as having opposed it long before that election," he continued.

The 38-second video montage was taken last week during a speech and question period with New Democrat MPs and staff members, an NDP spokesperson said. The party provided a copy to The Canadian Press after it was published by BuzzFeed news earlier this week.

Trudeau once again avoided criticizing Trump on Thursday in Washington.

"I have great faith in the American people and look forward to working with whoever gets elected in November," said Trudeau, who did not mention the Republican candidate by name.

"As we approach November and as we move beyond into the next administration there will be some lessons learned that I hope get learned," he continued. "But like I said, I have tremendous confidence in what Abraham Lincoln referred to as the 'better angels of our nature."'

Other leaders have been less hesitant to criticize Trump.

Mexican President Enrique Pena Nieto denounced Trump's "strident rhetoric" in a recent interview with Mexican newspaper Excelsior, comparing the tone of debate to that which led to the rise of Adolf Hitler and Benito Mussolini.

U.S. President Barack Obama, for his part, has often spoken out against the views espoused in Trump's speeches.

Mulcair has spoken out against Trump before, notably suggesting the Republican leadership candidate should be kept out of Canada based on his controversial proposal to ban Muslims from entering the United States.

"I say we should limit access to Canada for people who are spouting hatred. We should make sure that Donald Trump stays out of Canada," Mulcair told reporters outside the House of Commons on Dec. 8.

The same day, Foreign Affairs Minister Stephane Dion said that while he didn't want to get involved in another country's internal politics, Canada has "never been as far...from what we've just heard in the United States" he told reporters who asked him about Trump's proposal on Muslims.