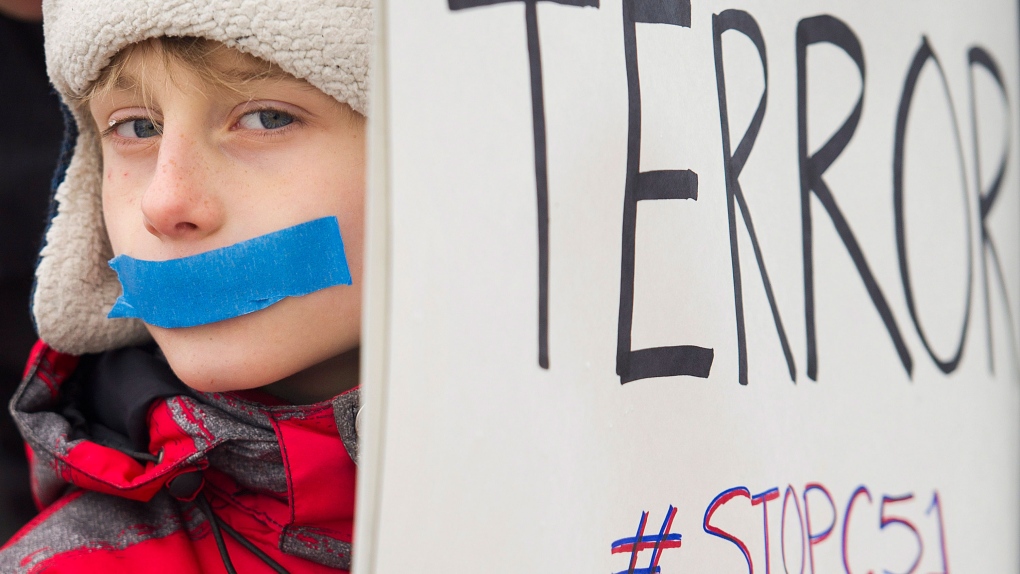 A young boy demonstrates to protest on a National Day of Action against Bill C-51, the government's proposed anti-terrorism legislation, in Montreal, Saturday, March 14, 2015. (Graham Hughes / THE CANADIAN PRESS)

OTTAWA -- A New Democrat MP says he will table a private member's bill at the earliest opportunity to repeal controversial anti-terrorism measures -- accusing the Trudeau government of moving too slowly on planned reforms.

It also expanded the sharing of federal security information, broadened no-fly list powers and created a new criminal offence of encouraging someone to carry out a terrorism attack.

It became law with the support of the Liberals, who have promised to change what they call "problematic elements." The NDP staunchly opposed the bill as a gross infringement on civil liberties.

At a news conference, Garrison chided the Trudeau government for lack of "substantive action" since the October election.

The government should focus on counter-radicalization efforts and providing security agencies with enough resources to fight threats, he said.

But rescinding Bill C-51 would be the best place to start, Garrison added. "This was a creature of the Conservative government supported by the Liberals."

The Liberals have committed to a handful of specific changes as well as a wide-ranging review of national-security measures that will involve public consultations.

The government has pledged to ensure all CSIS warrants respect the Charter of Rights and Freedoms. This would likely roll back C-51 provisions allowing the spy service to disrupt terror plots through tactics that breach the charter as long as a judge approves.

Before the summer recess, the Liberals introduced legislation to create a special committee of parliamentarians to keep an eye on national-security operations.

They also plan to appoint a co-ordinator of community outreach and counter-radicalization to serve as a focal point for multi-agency efforts.