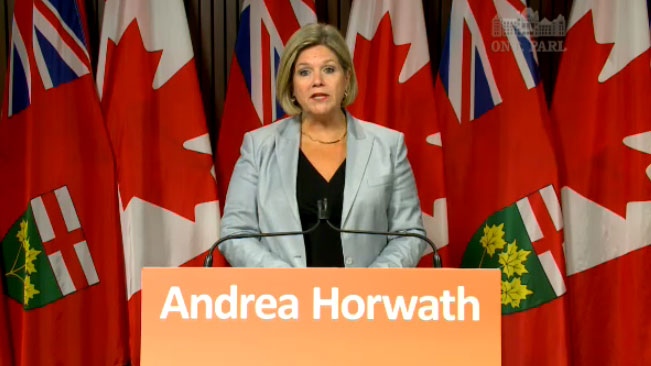 Andrea Horwath speaks to media at Queen's Park in Toronto.

TORONTO -- Ontario's New Democrats are going to fight against privatization of electricity agencies and the "fire sale" of public assets in the province, leader Andrea Horwath vowed Wednesday.

Horwath said the party will take its campaign directly to Ontarians, telling them that the profits that Ontario Power Generation, Hydro One and the Liquor Control Board of Ontario generate help the province invest in needed services.

"You don't burn the furniture just to heat the house," Horwath said at a news conference.

Earlier this year the Liberal government set up an advisory council, chaired by TD Bank Group CEO Ed Clark, to find ways to "optimize" the value of Ontario Power Generation, Hydro One and the Liquor Control Board of Ontario.

Putting Clark in charge of that task is "like asking a fox to guard the hen house," Horwath said.

The Liberal plan could involve inviting large pension funds to invest in the provincial energy and liquor agencies while retaining public ownership, but Premier Kathleen Wynne has not said what could be the subject of a total or partial sale.

Horwath said selling off bits and pieces is a "slippery slope."

"We've made the responsible choice by asking an expert team led by Ed Clark to look at Ontario's assets and make sure they are working to the best advantage for the people of Ontario, while reinvesting revenues in infrastructure and jobs," he said in a statement.

A hydro sale would mean more expensive bills for families and businesses, and selling the LCBO would deprive the province of $1.7 billion in revenue each year, she said.

"I'd like to speak directly with Ontarians," Horwath said. "OPG, Hydro One, the LCBO, they're yours. These are your assets. They belong to you. They belong to Ontarians and the profits that they make help us to invest in the services that you rely on."

The Liberal government has said it wants to retain majority ownership in the LCBO and the electricity agencies, even if it decides to invite pension funds to invest in the provincial agencies.

The province announced last week it was following through on a pledge to sell a parcel of land on the Toronto waterfront owned by the LBCO. Horwath said she is willing to look at the details of that sale.

"When it comes to specific pieces of property, whether it's owned by the LCBO or a different Crown agency, the bottom line is we're prepared to look at the details, but that can't be confused with our commitment to making sure that the LCBO remains in public hands, that the OPG, Hydro One, these agencies are public assets," Horwath said.

Duguid suggested that Horwath is trying to "distract from NDP infighting" with her privatization fight.

The party's disappointing showing during the June election -- their seat count of 21 remained unchanged -- could mean trouble for Horwath when she faces a leadership review in two months. Some party faithful have expressed concerns over the NDP's inclusion of some centrist policies during the election.

Horwath said she has had a lot of feedback -- particularly from party members in Toronto, where the NDP lost three seats -- about connecting with the party's core values. She called the party's internal debates and discussions "a healthy thing."