The federal election race is officially under way, and the Conservatives, Liberals and NDP appear to be in a three-way race as they leave the starting line.

The latest ballot tracking from Nanos Research shows a razor-thin margin of voter preference support separating the first-place Conservatives from the NDP and Liberals, in a survey that asked respondents which two parties they would consider voting for in their local riding.

“The trend has been favouring the New Democrats,” pollster Nik Nanos told CTV News on Sunday. However, he points out that the 78-day election campaign will afford each party and leader more time to rise and fall in popularity. “Who knows where we’ll end up on election day?” he said.

The Conservatives were most popular in the Prairie provinces with 52.7 per cent support. They were also buoyed by a leading 36.5 per cent result in Ontario. Atlantic Canada and Quebec were their weakest regions, where they had only 18 and 17.6 per cent support, respectively.

Liberal support was strongest in Atlantic Canada at 48.2 per cent, followed by 29.8 per cent support in Quebec and Ontario. Their weakest numbers came out of the Prairie provinces, where only 18.2 per cent of supporters favoured them.

The NDP continued to lead all parties in Quebec with 36.4 support. They also garnered support in the mid- to high-20 per cent range in all other parts of Canada, with their weakest showing in the Prairies coming in at 24.3 per cent. 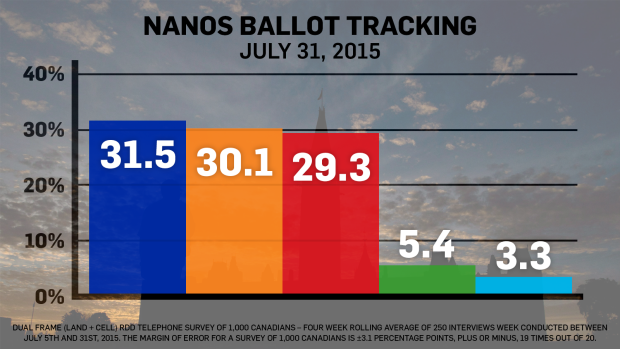 Nanos Research collected the survey data through random landline and cellphone interviews with 1,000 Canadians over the course of four weeks, weighted for age and gender using the latest census information. The numbers are based on a four-week rolling average of Canadian opinion ending on July 31.

Results are considered accurate to 3.1 percentage points, plus or minus, 19 times out of 20.