NANOS ON THE NUMBERS

A new survey shows the federal Conservatives and Liberals in a virtual tie, with the NDP surging, five months out from the scheduled federal election this October.

The Nanos poll shows the Conservatives with a numeric lead at 32.9 per cent of support among poll respondents, and the Liberals trailing at 31.3 per cent. And while the NDP came in at 25.2 per cent, their numbers have been trending up since February, according to pollster Nik Nanos. 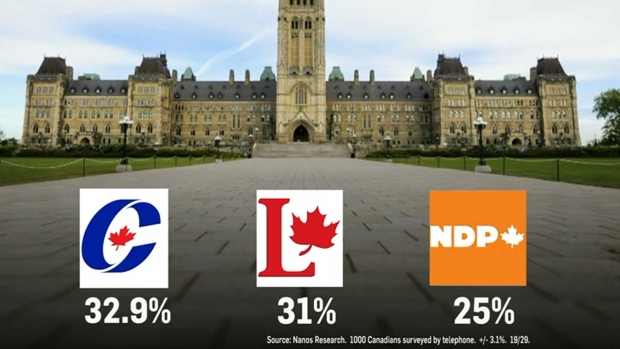 "The latest Nanos tracking has pretty well a dead heat between Conservatives and the Liberals," pollster Nik Nanos told CTV News. "The New Democrats are trending up and they're at 25 per cent, which is actually quite good for Tom Mulcair and the New Democrats."

In the 2011 federal election, the NDP hit 31 per cent nationally.

Nanos says there are a number of factors playing into the NDP's rise.

"First of all, Tom Mulcair's doing better on the preferred prime minister front, although he still trails the other two party leaders. And more Canadians would consider voting New Democrat now than a year ago, which means the New Democrats are basically on the political radar," said Nanos.

But the kicker will be the effect of the NDP rise on the Liberal and Conservatives numbers. According to Nanos, a New Democrat surge usually benefits the Conservatives, as it splits the progressive vote between the Liberals and the NDP.

"If there's no clear challenger to (Prime Minister) Stephen Harper, then what we'll see is the non-Harper universe divided."

The race between the three major federal parties is also tight in Canada’s key regional battlegrounds.

The poll shows the Conservatives with the advantage in Ontario, at 39.3 per cent. The Liberals came in at 35.7 per cent, with the NDP lagging behind at 19 per cent.

"For the Tories, Ontario is the most important battleground. Their majority last time was made in Ontario," said Nanos. 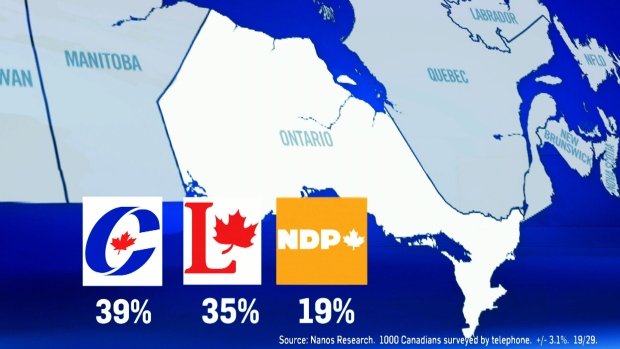 The poll shows a tight race between the Liberals and NDP, at 33.5 per cent and 30.6 per cent respectively. The Conservatives sit at 17.7 per cent in the province, which, according to Nanos, means they will likely keep their existing seats and maybe pick up a couple more in the election, tentatively set for Oct. 19.

"We've got to watch what happens in Quebec because there's a significant amount of volatility there," said Nanos.

Meanwhile, the Bloc Quebecois sits at 14.4 per cent.

There’s also a two-way battle between the Liberals and NDP in B.C. The parties sit within less than a percentage point of one another – 31.8 per cent for the Liberals and 31.1 for the NDP. The Conservatives came in at 26.5 per cent.

But for Nanos, the story out of B.C. is the rise of the Green Party, which is seeing 10.6 per cent of support among poll respondents – significantly higher than its showing in other regions.

"The upside for the Greens is that it seems that their support in British Columbia is concentrated on the Island of Vancouver, which means that it could actually be efficient at generating a couple seats for (leader) Elizabeth May. Perhaps she'll have some company in the House of Commons if this trend holds up," said Nanos.

And the Conservatives carry a strong lead in Manitoba and Saskatchewan, at 43 per cent, and Alberta, at 53.3 per cent.

The weekly Nanos poll provides a snapshot of where the federal parties sit. The results are based on random live telephone interviews with 1,000 Canadians, using a four-week average of 250 respondents each week. The polling period ended May 14, and is accurate 3.1 percentage points, plus or minus, 19 times out of 20.