TORONTO -- How do Canadians feel about the COVID-19 response? It depends on what province they're living in, according to Nanos Research's Nik Nanos.

According to Nanos' latest report card, residents of Quebec ranked their government's vaccine rollout as a 7.6 out of 10, where the Atlantic provinces got a ranking of 7.2 and B.C. received a 6.4.

The harshest grade however, was reserved for Ont. Premier Doug Ford's government,which received a dismal 3.9 on Nanos' latest report card.

Part of the reason could be a broader lack of confidence in the Ford government, after the release of a scathing new report showing systemic failures in Ontario's long-term care homes.

A 322-page report from Ontario's Long-Term Care Commission found that the province had no comprehensive plan to protect long-term care homes, leaving residents and staff 'easy targets' for COVID-19

Merrilee Fullerton, Ontario's minister of long-term care, has faced blistering criticism and growing calls for her resignation. However,she has blamed previous governments of other parties for the system's failure.

"I was left to pick up the pieces from a devastating 15 years of neglect,” Fullerton said during question period at Queen’s Park. 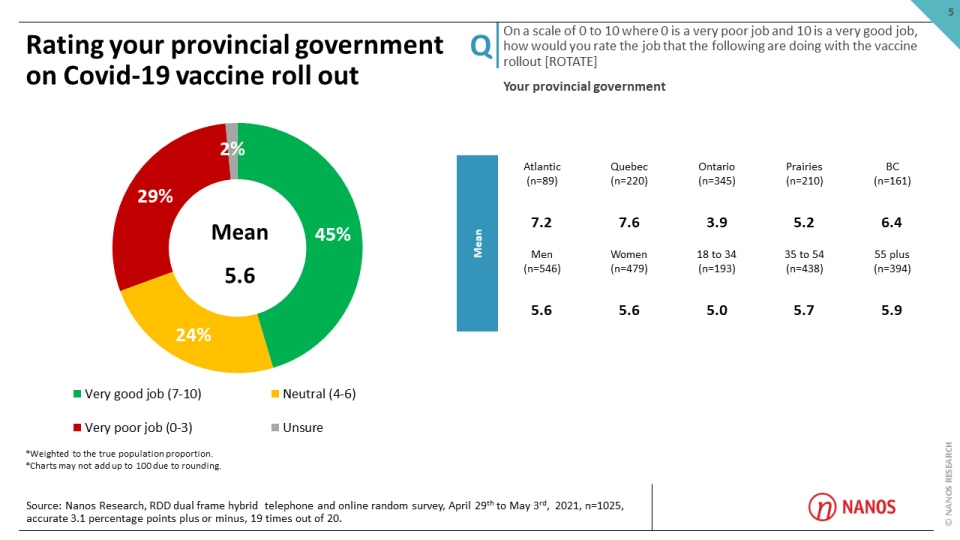 Nanos says the response could backfire on the Ford government because "the last thing that any individual wants to hear is for a politician to say, 'I'm only one person and then it's not my fault.'"

As for Ford, who returned to Queen’s Park on Wednesday, after isolating for two weeks following a COVID-19 exposure, he expressed “full confidence” in Fullerton and vowed to fix the province's neglected long-term care homes.

NDP Leader Andrea Horwath blasted it as a “hollow gesture," and reiterated her calls for Fullerton to be fired.

Nanos thinks that the scathing report could continue to haunt Ontario’s premier.

"The Ford government has been in power… for a number of years," Nanos said, "The pandemic has put a spotlight [on] and has exacerbated some of these issues within long-term care facilities."