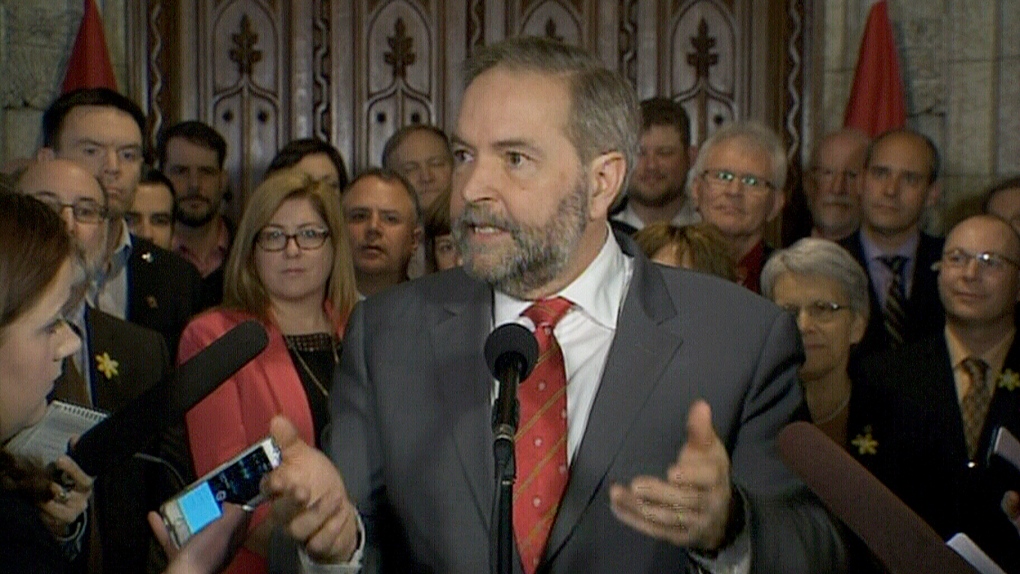 OTTAWA -- Tom Mulcair made it clear Wednesday he intends to stay at the helm of the federal New Democrats until the party chooses his successor -- and this time, he enlisted his fellow NDP caucus members to endorse the decision.

Indeed, when he gathered his fellow MPs in the foyer of the House of Commons for a news conference following a longer-than-usual caucus meeting, there was a sense that perhaps a change of heart was coming.

Instead, Mulcair doubled down.

"The reason that I'm here is to make sure that we have stability and continuity as we prepare to have a new leader; that's what the members decided," he said after the meeting.

"In the meantime, I was elected by the entire membership as leader; caucus has asked me to stay on until that leadership review, and I'm proud to be able to do that."

On Sunday, party members overwhelmingly voted to replace Mulcair -- a legacy of the party's crushing third-place finish in last October's federal election, following a campaign that began with the NDP looking poised to form their first federal government.

The majority of delegates at the event -- 52 per cent -- voted in favour of a leadership review, which is scheduled to take place within the next 24 months. That means Mulcair could remain leader for up to two years despite having the support of less than half of the delegates at the convention.

In the meantime, Mulcair said he can also be a boon to the party with issues like fundraising.

"I think that is one of the things where I can continue to help if people require my aid," he said.

"If they want me in to give a hand with that, you better believe that you're showing all of your experience when you talk about the importance of fundraising, especially with an impending leadership race."

Mulcair described Wednesday's discussion as the "best caucus meeting" he has ever attended.

"Every single member of caucus got to say everything thing that was on their mind," he said. "I can only tell you this: it was an inspiring, uplifting, positive meeting, and the result is with me today."

The show of solidarity was clearly meant to quash talk among some NDP MPs who have openly questioned whether he ought to be sticking around, considering the unequivocal message that came out of the convention.

Indeed, caucus members all seemed to be singing from the same song book.

"He has the strength we need to lead us through this transition period and he has the support, the full support of caucus," said rookie MP Tracey Ramsey.

"I'm very happy that he's staying on and that he will continue to do his work in the House, which he is fantastic at."

It is important to remember that delegates who voted in favour of a leadership review can still agree that Mulcair brings many skills to the NDP's fight against the Liberal government, said Quebec MP Matthew Dube.

"In the interim, as well, let's face it, we have no doubt that some of my caucus colleagues will be focusing on leadership bids," he said.

"So, to have as much talent as we can on board, that's certainly something that's important."

The NDP federal council, its key decision-making team, is expected to meet in May to further discuss setting the wheels in motion for a leadership race. And while no one has declared their intention to run, at least two MPs are not ruling it out.

"Right now, it's really too early to talk about that, and you know, we have time," Quebec MP Alexandre Boulerice said Wednesday.

Veteran B.C. MP Nathan Cullen, a 2012 leadership contender, is also considering taking another shot at the job and plans to discuss the possibility with family.