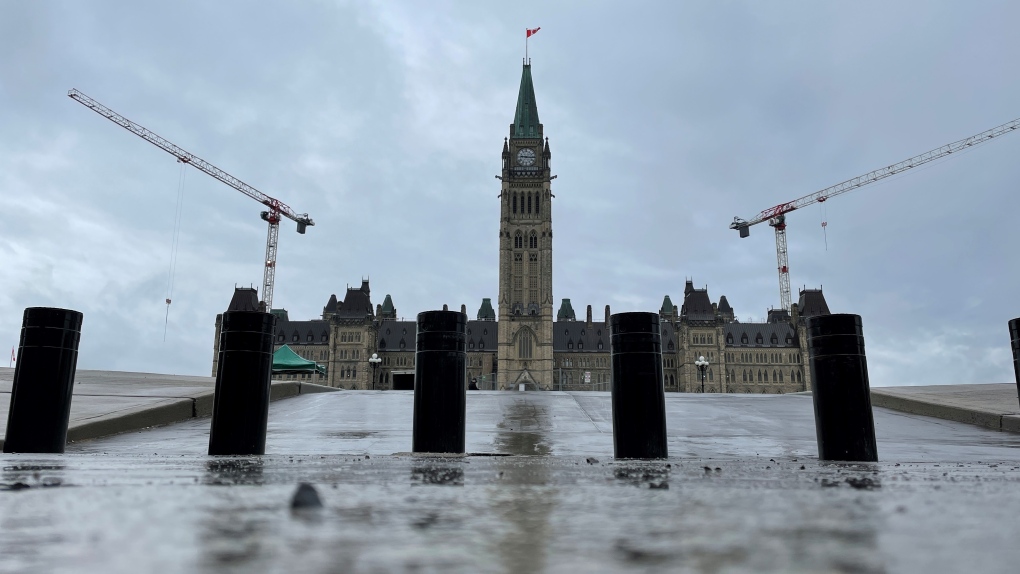 Parliament Hill is seen in this photo taken on April 30, 2021. (Photo by CTV News' Jeff Denesyk)

OTTAWA -- Members of Parliament say they are open to changing the way witnesses are treated at committees after some sexual violence survivors and advocates say they felt angered and, in some cases, revictimized when telling their personal stories in those meetings.

NDP ethics critic Charlie Angus says he believes a "dysfunctional circus atmosphere" has taken hold at a number of committees, where MPs are often more interested in political posturing than trying to remain on topic and respectful while hearing from witnesses.

Witnesses sharing stories and expertise on how vulnerable sex workers could be negatively affected by the federal government moving to regulate content on pornography websites say there were shocked by how MPs cut the meeting short after more than 40 minutes of partisan bickering.

"These women who came to give their point of view, they left, I think, very disrespected," Angus said of the April 19 meeting.

It is one of several committees that has been inviting victims of sexual assault, exploitation and trauma to share their experiences and recommendations for change.

Members of Parliament are bound by conventions that make the process of committee meetings extremely regimented, including limited amounts of time to speak. But a growing number of victim advocates believe committees should develop a more trauma-informed approach to dealing with vulnerable witnesses.

Some MPs have even received threats of violence from people who Angus believes are part of what he calls an "American culture war against pornography."

Meanwhile, the women who testified at the April 19 meeting left feeling upset, unheard and "revictimized."

"Inviting us was a false gesture," says Melissa Lukings, a researcher and sex workers' rights activist with intersectional lived experience.

"Every possible obstacle was in place. They didn't even follow the standard procedure for notice, which would have allowed for briefs to be submitted and translated ahead of time," Lukings said.

Instead of focusing on testimony by Lukings and asking her questions, Liberal MP Brenda Shanahan used her allotted time with the witnesses to table a motion.

The motion called for the committee to "hear from further witnesses at its next scheduled meeting for a minimum of two hours."

Shanahan said Monday that she felt compelled to use her allotted time to table her motion not to block the witnesses from speaking, but to stop opposition MPs on the committee from trying to shut out the voices of people like Lukings.

"We wanted attention brought to this matter," she said, as well as do a deeper study. She said she believed a number of opposition MPs were part of an "anti-porn brigade."

"To cut (the witnesses) off I think was political," he said.

"That felt like a moment we had crossed some kind of line in terms of how we treat witnesses ΓÇª and we've got to really think about that."

The ethics committee isn't the only one calling witnesses who have experienced the dark world of sexual assault and exploitation.

The status of women and the national defence committees have each been looking into widespread allegations of sexual misconduct in the Canadian Armed Forces.

"I made a big effort to ensure we were flexible. Many times I allowed people more time than they were allowed because of the sensitivity of it," Gladu said.

However, some women invited to speak last month have raised concerns about MPs cutting off victims' mid-testimony due to the rules that govern these meetings.

"I think this has been a long-standing problem, but I think it's particularly acute right now," said Julie Lalonde, a sexual violence prevention educator who testified at the status of women committee April 8.

"There is a real sense of (politicians) asking really intense questions of witnesses, but very clearly watching the clock while the person speaks -- so not listening intently to what the person is saying, which then leads to not having the proper empathetic response."

Discussions will now be held about how to ensure MPs take a more trauma-informed approach when victims and survivors come to share their stories, Gladu said.

Both Gladu and Shanahan also said they would be in favour of training for MPs in talking to witnesses about sensitive issues and possible recommendations to the House of Commons to provide better support for witnesses in the future.

"I think that there's a possibility of changing the standing orders overall for committees, because there are many types of sensitive situations that committees hear testimony about," Gladu said.

"We have heard some of the witnesses and how they've felt, not just on this study but other studies as well, so I think it merits discussion."

This report by The Canadian Press was first published May 3, 2021.