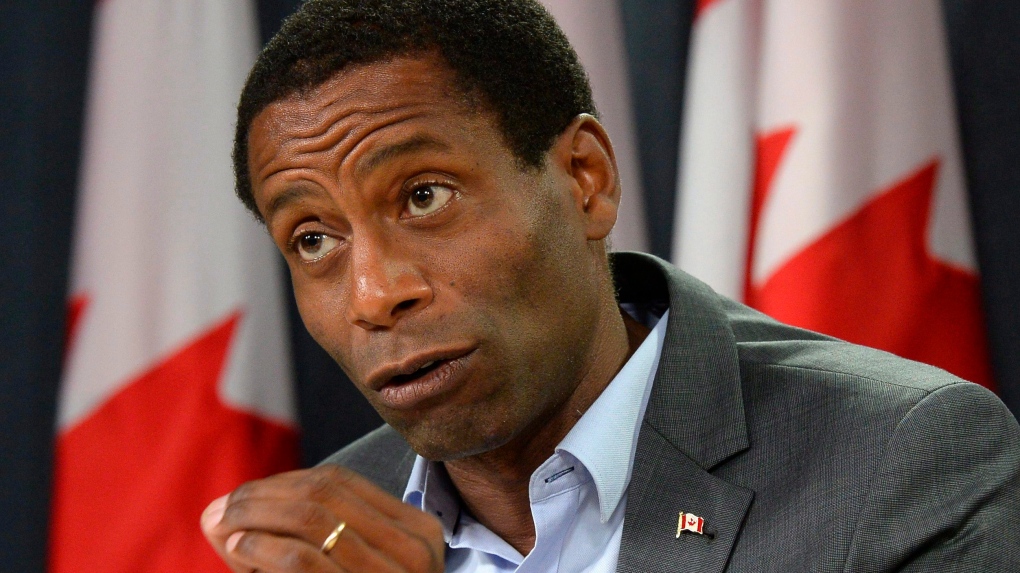 Greg Fergus speaks during a press conference in Ottawa on Saturday, September 12, 2015. Fergus says the plan to legalize marijuana should take into account the fact that the black community has been disproportionately criminalized for using the drug. [Justin Tang / THE CANADIAN PRESS]

OTTAWA -- Liberal MP Greg Fergus wants the government to look at its plans to legalize marijuana under a "racialized lens" to ensure that black Canadians aren’t "unfairly targeted as they have been in the past."

Fergus, who is also the president of the Liberal black caucus said it’s important that the government takes into consideration that the black community has been unfairly targeted under the existing marijuana laws.

"We do know that black Canadians have disproportionality been charged with and are imprisoned for possession of small amounts of cannabis. This is also an argument that can be made for the Aboriginal community as well," Fergus said following the Canadian Caucus of Black Parliamentarians summit, which wrapped up in Ottawa on Tuesday.

During the summit, provincial ministers and federal parliamentarians met to discuss issues facing black communities in Canada. The topic of marijuana legalization and the justice and economic impacts of the proposed policy were among the top issues discussed at the meeting.

"These are things where we feel that we have to make sure that we take into account and we have to seek out measures in which we can address those issues as we move towards the legalization of cannabis," said Fergus, who plans to push his federal colleagues, including Justice Minister Jody Wilson-Raybould, to ensure that the ongoing study of legalization factors in the "systemic" experiences of black Canadians.

The federal government introduced legislation to legalize marijuana in April. The proposed law, Bill C-45, is currently before the House Health Committee for study, and it’s expected to be high on the political agenda when Parliament resumes mid-September.

Fergus said the federal black caucus would like to see awareness campaigns targeting black communities once marijuana is legalized, to address things like usage.

The caucus met just over a week after the attack in Charlottesville, Va., that left one woman dead and at least 19 injured as a result of clashes between white nationalists and counter-protesters on Aug. 12, and just days after protests over immigration policies in Quebec City turned violent.

“We don’t exist in a vacuum. So, we only need to look around the world and we see episodes of extremism bubbling to the forefront and they have been for the last number of years,” said Nova Scotia Senator Wanda Elaine Thomas Bernard.

This is something the black caucus said bolsters its call for more disaggregated data collection by all levels of government—another key issue discussed over the summit.

"If you go back ten years, twenty years, thirty years, there’s always been some form of demonstration… this is why we need more data collected to see if, you know, 'is hate crime actually taking place more?'" said Coteau, who is also the Ontario minister responsible for anti-racism.

"We need to standardize the collection of that type of data so we can make better policy decisions based on what’s happening," he said.

The caucus also discussed the adoption of the United Nations’ Decade for People of African Descent, and identifying and connect with allies in other Canadian communities. Next year’s summit is planned for Nova Scotia.