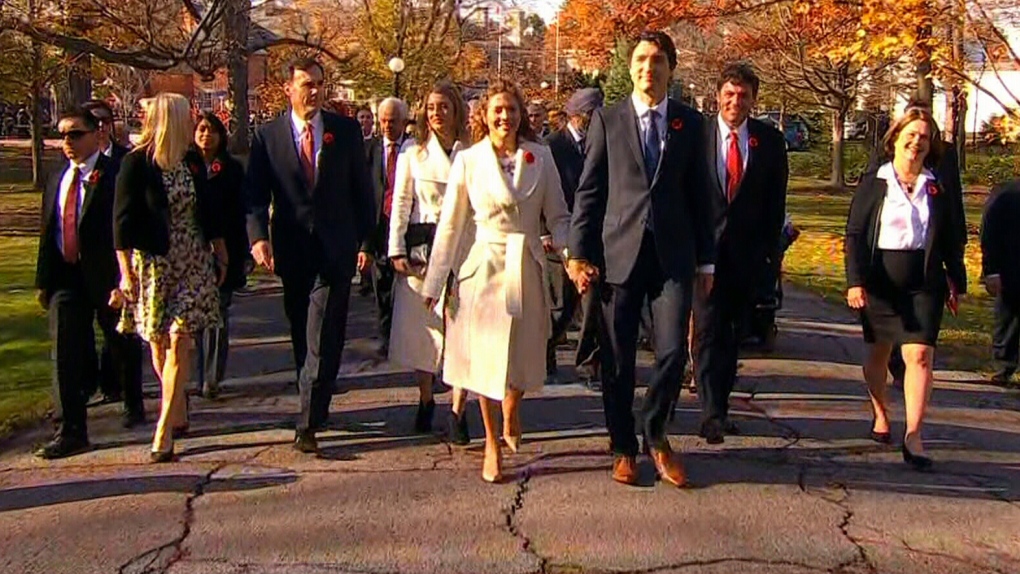 Justin Trudeau and his cabinet arrive at Rideau Hall in Ottawa, Wednesday, Nov. 4, 2015.

OTTAWA -- A New Democrat MP is hoping the Liberals vote for his political gender equity bill as it reaches its next step in Parliament on Wednesday, exactly one year after Justin Trudeau was elected prime minister.

The next vote on Kennedy Stewart's gender equity bill comes on the first anniversary of the day Justin Trudeau led the Liberals to a decisive majority. Trudeau has spoken repeatedly about being a feminist and followed through on a promise to appoint a gender equal cabinet.

Wednesday's vote will either propel bill C-237 to committee to be studied, or kill it off. Once at committee, it can be amended before it goes back to the House for another vote.

The private member's bill proposes withholding some of the campaign spending rebate each party receives if women don't account for 45 per cent of a party's slate of candidates (the remaining five per cent leaves room for transgender candidates). The amount it would cost each party varies depending on how many women run for it. Based on the 2015 election, the Conservatives - with a 20 per cent female slate - would have lost $2.6 million of their refund. The Liberals, with women making up 31 per cent of their slate, would have lost just over $1.5 million. The NDP had a slate that was 43 per cent women, and would have lost $148,706.

Parties that meet a certain threshold get 50 per cent of their expenses refunded by Elections Canada.

Stewart says the Liberals won't whip the vote on C-237 and he's been approached by some Conservative MPs who support the bill, so he hopes that will be enough to keep it moving. Green Party Leader Elizabeth May and the Bloc Quebecois also support it, he said.

"We've been in Parliament for a year, we've only got 36 months left, and for my mind there's been no legislation put forward to further the betterment of women in Canada," Stewart said.

'I have a small amount of hope'

While women play prominent roles in Parliament - Trudeau succeeded in building a cabinet that's 50 per cent women, and the Conservatives elected Rona Ambrose as their interim leader - that can paint a misleading picture. Only 26 per cent of MPs are women, a one point increase since 2011. Men far outnumber women on many committees because a larger proportion of female MPs are now busy in cabinet or filling parliamentary secretary roles.

Stewart says if Parliament doesn't do something, the 2019 election will see another paltry one percentage point increase rather than moving closer to being representative of the Canadian population.

"I have a small amount of hope that Liberal backbenchers will save the cabinet from themselves and vote for this," he said.

The MP for British Columbia's Burnaby South riding is further buoyed by a legal opinion, written by a House of Commons lawyer, that found his bill is constitutionally sound. There seems to be little reason, he says, for the government to oppose the bill other than the fact that he isn't a Liberal MP.

Democratic Institutions Minister Maryam Monsef declined to be interviewed about the bill, but said in question period that she won't vote for it.

Monsef said the House could help women succeed post-election if there were more family-friendly initiatives and more civility, and that she's waiting for the special committee on electoral reform to report back before dealing with how to get more women elected.

"We've made a clear commitment to gender parity in this government. Our prime minister has been leading as a feminist around the world," Monsef said.

Given the gender breakdown in the House - 88 women and 246 men - Stewart says a no vote would be telling.

"If the bill goes down tomorrow night, it'll be because men killed it," he said. "That's something for them to think about... if it was 50-50, bills like this, they'd have a much better chance of succeeding."