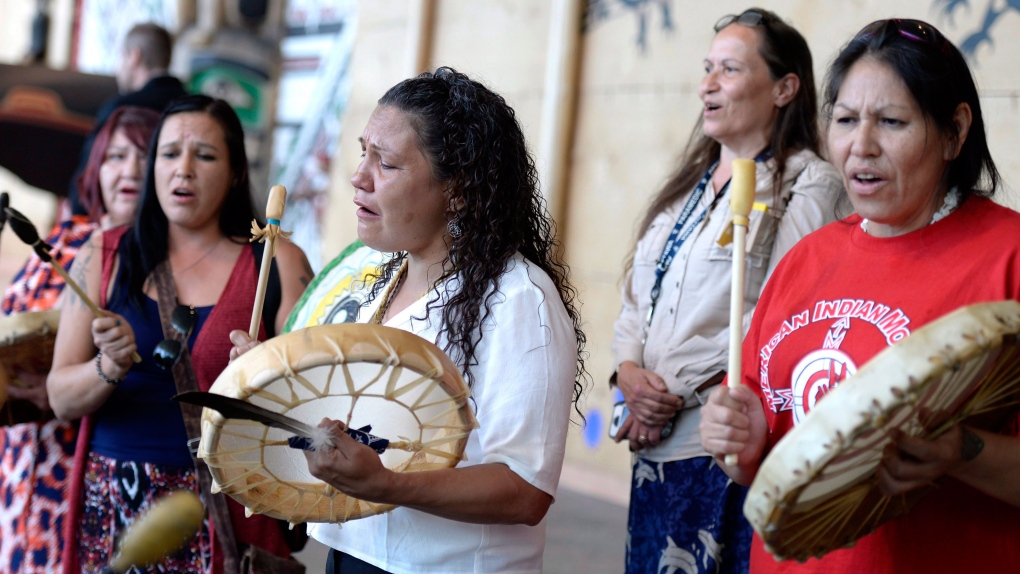 Women drum following the announcement of the inquiry into Murdered and Missing Indigenous Women at the Museum of History in Gatineau, Quebec on Wednesday, Aug. 3, 2016. (THE CANADIAN PRESS/Justin Tang)

OTTAWA – The National Inquiry into Missing and Murdered Indigenous Women and Girls has completed its report, and will be releasing it publicly on June 3.

The inquiry concluded its cross-Canada hearings late last year and the findings will be unveiled at a closing ceremony in Gatineau, Que. where the commissioners will discuss their work and take questions.

The report will lean on stories the commissioners heard from more than 1,500 family members, survivors, "knowledge-keepers," experts, and other officials who testified at the 24 hearings and events held between 2017 and 2018. The commission says that more than 800 others offered their experiences through artistic expressions.

Last spring the commissioners asked for a two-year extension pushing the completion to 2020, but the federal government instead allowed them to take an additional six months past the initial November 2018 deadline, giving the commission until June of this year to conclude the inquiry.

"Marking a nationally-significant milestone, the closing ceremony and presentation of the final report will signal the dawn of a new day and honour missing and murdered Indigenous women and girls, foster the healing of families, survivors and First Nations, Métis and Inuit communities, and build a safer future," the commission said in a statement announcing the completion of the report.

The years-long process has been dogged by challenges, from criticism of lacking focus and failing to properly address victims and families' needs, to delays and turnover in staff, and tensions between the commissioners and the federal government.

In November 2017 the inquiry released its interim report, highlighting the difficulties in the process, and drew some preliminary conclusions, including saying that various levels of political jurisdictions need to work better together, and with Indigenous governance to more effectively apply existing recommendations.

Since the inquiry was launched in Sept. 2016, it travelled the country gathering information, hearing from families, communities, experts, and institutions, with a mandate to examine and report on the underlying and systemic factors that contribute to violence against Indigenous women and girls in Canada.

The government initially dedicated $53.8 million for the inquiry, and has since announced millions more for various related initiatives, including enhanced health supports for victims and families, efforts aimed at improving police policies, and a $10 million commemoration fund.