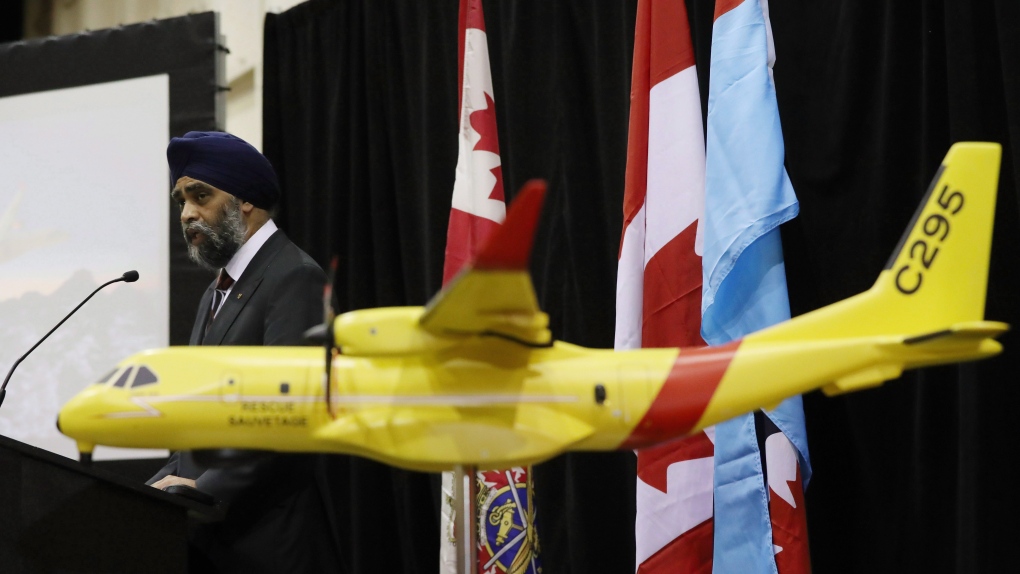 Defence Minister Harjit Sajjan announces that the federal government of Canada will spend $2.3 billion to replace the military's ancient search-and-rescue planes with 16 new aircraft from European aerospace giant Airbus that at CFB Trenton in Trenton, Ont., on December 8, 2016. THE CANADIAN PRESS/Lars Hagberg

OTTAWA -- The Royal Canadian Air Force is being forced to fly its ancient search-and-rescue planes even longer as COVID-19 further delays the delivery of replacement aircraft.

The Defence Department is playing down any significant impact on the military's search-and-rescue operations from the new delay, which has left the first of 16 new Airbus-built CC-295s stranded in Spain for at least several more months.

Jessica Lamirande, a department spokeswoman, said a recent analysis conducted by the Air Force and procurement officials concluded the military has “the necessary flexibility” to keep flying its current search-and-rescue planes.

Those planes include six Buffalo aircraft and seven older-model Hercules planes. Their primary role is to find and rescue Canadians stranded or in danger in places or situations where municipal or provincial authorities are unable to respond.

Yet the planes are all around 50 years old and scheduled for retirement as maintenance requirements have grown and spare parts become harder to find. In 2014, officials had to get parts from a museum in Trenton, Ont., in 2014 to fix a broken Hercules.

Canada's auditor general also raised concerns about the state of the aircraft in a scathing report in 2013, noting the Buffalo aircraft were unavailable on 119 occasions in 2011. In five of those cases, no other airplane was available.

Lamirande said the Buffalo and Hercules planes would be able to operate until the CC-295s are in the air, saying: “We have the necessary flexibility to ensure continued and safe SAR coverage utilizing the existing capability.

“Although there are still schedule risks given the uncertainty of the pandemic situation, Canadians can rest assured that the Royal Canadian Air Force will continue to provide uninterrupted search-and-rescue services until we transition to the new capability.”

The federal government first started looking for new search-and-rescue planes in 2002, but the effort ground to a halt in 2007 after the Air Force was accused of rigging its requirements to favour an Italian-made plane.

A new competition was eventually launched and saw Airbus selected in 2016 to build 16 new CC-295s for $2.4 billion, with the first plane to be delivered last December and flying rescue missions this year.

Lamirande acknowledged the aircraft will remain in Spain until at least the early fall, saying the COVID-19 pandemic set back production as well as the military's ability to travel to Spain to review the plane and ensure it meets the Air Force's requirements.

“We are and have been working closely with Airbus to develop and implement mitigation strategies that will ensure continued progress notwithstanding the situation,” she said.

The government receives about 10,000 distress calls a year. Most are handled by the provinces or territories, with police and volunteers tasked with responding. About 750 of the most high-risk calls are answered by the military.

Military search-and-rescue personnel often use their specialized airplanes and helicopters to parachute or rappel into remote areas such as mountains, the high Arctic or one of Canada's three oceans to respond to plane crashes and sinking ships.

The military considers search-and-rescue a “no-fail mission,” meaning it must be ready around the clock and respond when called upon to help because of the potentially deadly consequences.