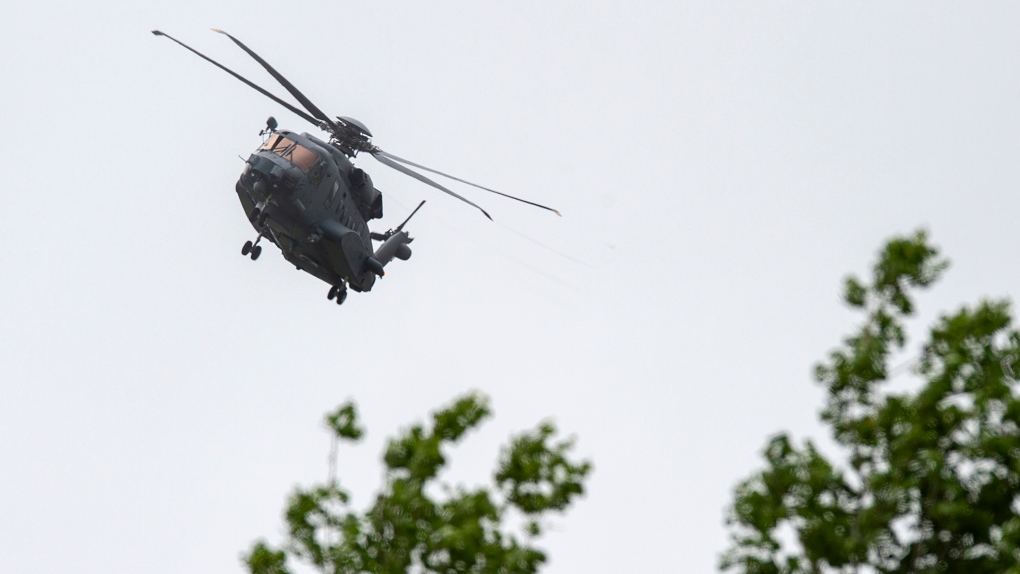 A CH-148 Cyclone helicopter from 12 Wing Shearwater, home of 423 Maritime Helicopter Squadron, flies near the base in Eastern Passage, N.S. on Tuesday, June 23, 2020. (THE CANADIAN PRESS / Andrew Vaughan)

HALIFAX -- The Canadian military has discovered cracks in the tails of 19 of its 23 Cyclone helicopters.

The Royal Canadian Air Force issued an emailed statement Sunday saying cracks had been detected in four helicopters, but that number jumped to 19 later in the day.

The Air Force said the Sikorsky-made aircraft have not been grounded or placed on an operational pause. Engineering experts from the military are working with the company to repair the aircraft, the military said.

"Sikorsky has a plan to address the cracking, with each aircraft requiring a unique approach to repair the affected components," a spokesperson said Sunday in an email.

"The Royal Canadian Air Force expects that the first few aircraft affected by this issue will be repaired within the next few days."

The office of Defence Minister Anita Anand wouldn't comment on the issue and forwarded queries to the military.

Tail cracks were first detected in one of the maritime helicopters during a routine inspection on Nov. 26 at 443 Maritime Helicopter Squadron, based in Patricia Bay, B.C.

The entire fleet is overseen by 12 Wing Shearwater, the Air Force base in the Halifax area that is home to 423 Maritime Helicopter Squadron, which also flies the CH-148 Cyclone.

The military also confirmed Sunday that two Cyclones did not appear to have any tail defects, and the remaining two in the fleet were receiving longer-term maintenance and will be inspected at a later date.

The "maintenance issue" has had an impact on Operation LENTUS, the military's effort to help those affected by the widespread flooding in British Columbia. The military, however, has deployed other aircraft to fill the gap, as has the province and other emergency response partners.

Canada placed an order for 28 Cyclones in 2004, but the helicopters did not start flying missions until 2018.

Cyclones are typically deployed on board Canadian frigates and used for search and rescue, surveillance and anti-submarine warfare.

On April 29, 2020, a Cyclone carrying six military members crashed off the coast of Greece, killing all aboard.

The crash marked the largest single-day loss of life for Canada's military since it took part in the war in Afghanistan. The crash also cast a spotlight on the Cyclone's long and problem-plagued development.

Defence procurement documents released earlier this year show the $3.1-billion project is "facing financial challenges, increased procurement costs and some financial adjustments," and that officials plan to ask the government for more money to finish it.

Canada's top military procurement official also warned at the time there would be no "quick fix" to the software issue identified as the primary cause of the crash last year. Troy Crosby, assistant deputy minister of materiel at the Department of National Defence, said officials were talking to Sikorsky to find ways to deal with the issue.

Two separate internal reviews by the Canadian Armed Forces found the autopilot on the helicopter -- code-named Stalker 22 -- took control of the aircraft as the pilot was turning to land on HMCS Fredericton.

A flight-safety review appeared to absolve Sikorsky of any responsibility, saying the type of manoeuvre that Stalker 22's pilot was attempting to perform was not spelled out in the military's documentation.

The commander of the Royal Canadian Air Force , Lt.-Gen. Al Meinzinger, has expressed confidence in the helicopter.

This report by The Canadian Press was first published Dec. 5, 2021.