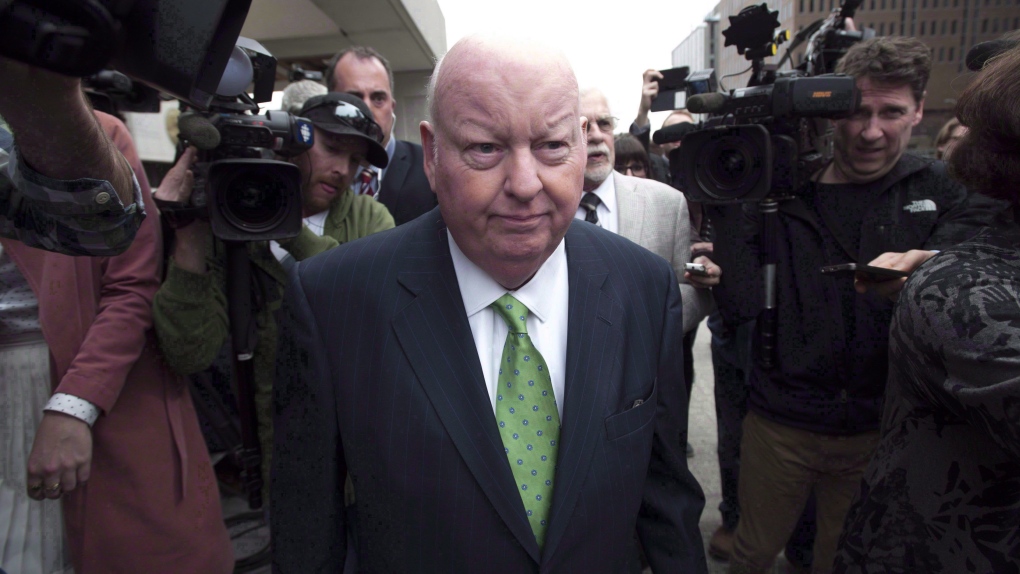 Sen. Mike Duffy leaves the courthouse after being acquitted on all charges Thursday, April 21, 2016 in Ottawa. An Ontario judge has delivered a blow to Sen. Duffy in his bid for financial restitution over his dramatic and protracted suspension without pay five years ago. THE CANADIAN PRESS/Adrian Wyld

OTTAWA -- An Ontario judge has delivered a blow to Sen. Mike Duffy in his bid for financial restitution over his dramatic and protracted suspension without pay five years ago, removing the Senate as a target in his multimillion-dollar lawsuit.

Justice Sally Gomery said in a ruling Friday that the Senate's decision to suspend Duffy is protected by parliamentary privilege -- a centuries-old right designed to protect legislators from having to answer to judges for doing their jobs -- meaning Duffy can't take the Senate to court over its actions.

Gomery is striking the Senate from Duffy's lawsuit, which sought more than $7.8 million from the upper chamber, the RCMP and the federal government.

In a statement after the ruling, Duffy said he'd "take the time needed to review the decision, and consider options."

Duffy is seeking damages in the wake of the high-profile investigation of his expense claims, which culminated in his acquittal on 31 criminal charges in 2016.

He filed his claim in August 2017, claiming "an unprecedented abuse of power" when a majority of senators voted to suspend him without pay in November 2013, before any criminal charges had been filed.

In January, the Senate sought to be struck from the lawsuit and the two sides spent two days in court in June making arguments.

Duffy's lawyers argued that Stephen Harper's staff aimed to quash a rising political scandal over Duffy's housing claims and the upper chamber gave up its privilege when Conservative senators allowed the Prime Minister's Office to dictate decisions about the case.

Gomery, in her ruling, said allowing a court to review the Senate's decisions on Duffy would damage the upper chamber's ability to function as an independent legislative body. She said she had to "respect constitutional imperatives" and suggested Duffy should do the same.

"Parliamentary privilege immunizes all of the decisions and conduct underlying Sen. Duffy's claim against the Senate. As a result, this court has no role in judging their lawfulness or fairness," Gomery wrote. "Since the actions at issue fall within those actions protected by parliamentary privilege, I cannot give any consideration to whether they were wrong or unfair or even contrary to Sen. Duffy's Charter rights. All of these are determinations that the Senate, and the Senate alone, can make."

This is an important issue, Duffy said in his statement.

"The Charter of Rights applies to all Canadians, but the court decision states that because of the centuries-old concept of parliamentary privilege, the charter doesn't apply to senators," Duffy said. He pointed out that his lawsuit against the RCMP is continuing.

The Senate's internal-economy committee said in a statement the court's ruling upheld the upper chamber's right to "control its own proceedings and its disciplinary authority over its members, free from outside interference."

The committee oversees spending in the upper chamber and was a key player in reviewing Duffy's expense claims.

"We are satisfied that this Ontario Superior Court of Justice ruling supports the Senate's position that all of its actions respecting Senator Duffy's suspension were protected by parliamentary privilege," said the statement, signed by the chair and two deputy chairs of the committee -- independent Sabi Marwah, Conservative Denise Batters and Liberal Jim Munson.