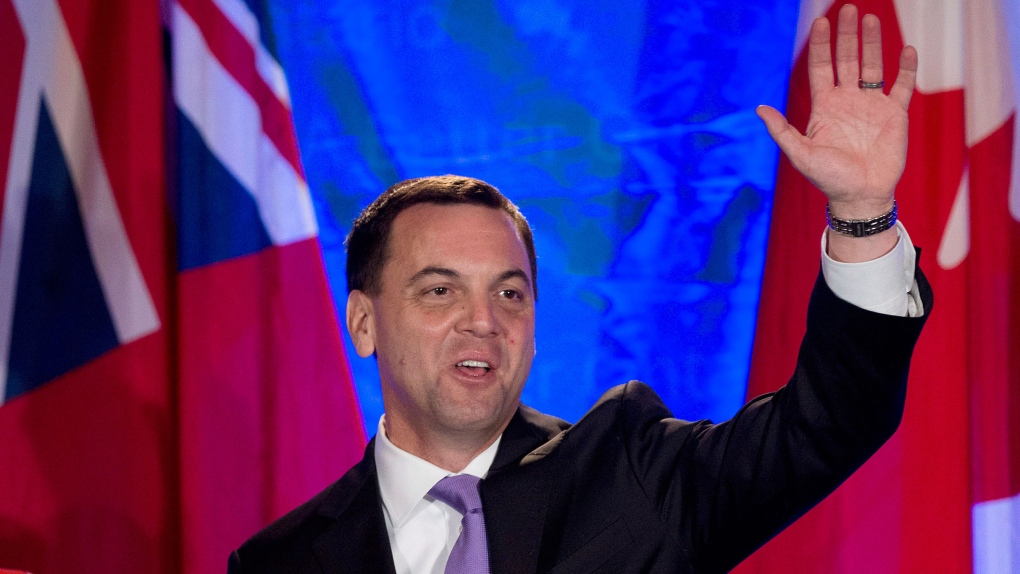 Ontario Progressive Conservative leader Tim Hudak, right, announces that he will be stepping down as party leader after being defeated his election night campaign head quarters as his wife Deb Hutton looks on, in Grimsby, Ont., on Thursday, June 12, 2014. (Nathan Denette / THE CANADIAN PRESS)

TORONTO -- The self-described outsider in the race to become leader of Ontario's Progressive Conservatives claimed the early lead in all-important membership sales after Saturday's cut off deadline.

Barrie MP Patrick Brown, the only one of the three candidates not to have a seat in the legislature, said he sold 40,410 new memberships to the PC party, while London-area MPP Monte McNaughton's campaign said it sold "a little less than 20,000."

"I am humbled by the support of the tens of thousands of Ontarians who bought a membership from our campaign," Brown said in a release.

Deputy PC leader Christine Elliott did not report any sales figures in a statement issued after the period for signing up new members ended, but said final numbers that eventually will come from PC headquarters will show she has "widespread support" across the province.

"I am confident the final numbers to be released by the party in coming days will reflect the momentum my campaign has built so far," she said.

The party may not release official results -- and a preliminary voters' list -- for more than a month.

Every PC member will be eligible to vote for the new leader in May, so candidates tried to sell as many $10 memberships as possible. People as young as 14 were eligible to become PC members.

The voting will be weighted so each of the province's 107 ridings gets 100 points in total, so where the memberships were sold can be just as important as how many.

The Tories had about 100,000 members in the early 2000s, but were down to just 10,000 when they lost their fourth consecutive election last June.

A PC party statement said "neutral" officials were reviewing the memberships reported by each campaign to ensure all required information is in place and that duplications are eliminated.

"The preliminary voters' list will be shared with the leadership campaigns, returning officers and riding associations by April 3 in order to provide the opportunity to check for accuracy," said PC party president Richard Chiano.

Elliott, who placed third in the 2009 leadership race won by Tim Hudak, was way ahead in fundraising, reporting $620,000 in donations as of Friday, compared with $197,000 for Brown.

McNaughton, who was a distant third in fundraising with only $77,000 in donations reported to Elections Ontario, has drawn fire for his stand against Ontario's new sex ed curriculum, but both Brown and Elliott have criticized the government for not consulting enough parents on the policy.

Brown has been openly critical of his rivals for supporting Hudak's controversial pledge to cut 100,000 public sector jobs, which most party members now agree cost them last year's election and helped the Liberals return to a majority government.

Hudak resigned shortly after the election defeat, the second under his stewardship.

PC party members across the province will vote for the new leader on May 3 and 7, using preferential ballots, with the results to be announced at a convention in Toronto on May 9.