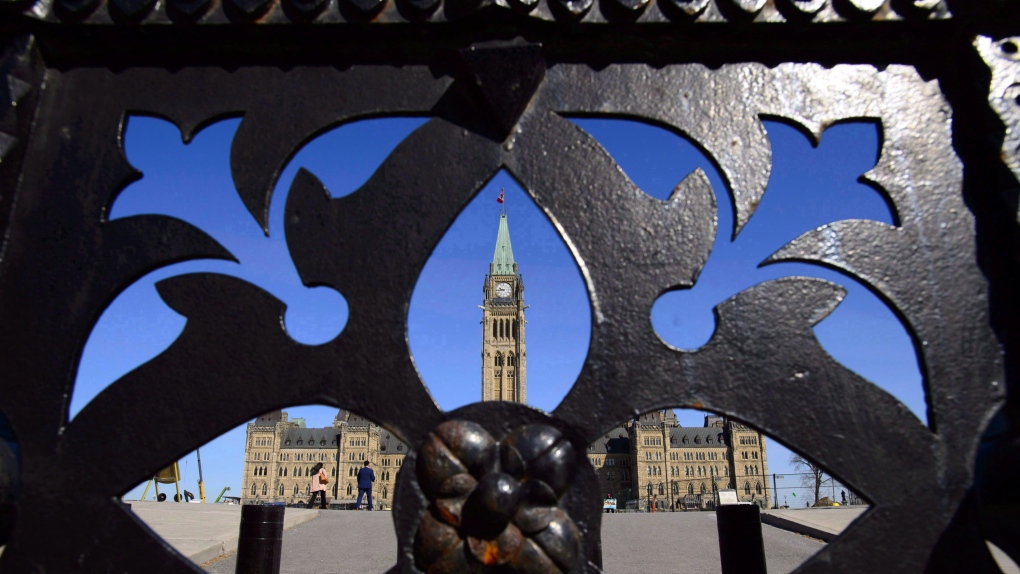 The centre block of Parliament Hill is seen from the front gates in Ottawa on April 23, 2018. THE CANADIAN PRESS/Sean Kilpatrick

OTTAWA -- The experts overseeing the massive restoration of Canada's largest Parliament building have to find out a way to cram more than 100 additional MPs into the House of Commons without compromising its architectural heritage.

A House of Commons committee Tuesday heard updates on the ongoing overhaul of Centre Block, which began more than a year ago and could last until well into the 2030s.

The building that ordinarily holds the House of Commons and Senate and boasts the iconic Peace Tower, is 93 years old. It's being modernized for 21st-century technology and security needs and requires significant repairs after facing nearly a century of Ottawa weather.

It also needs to take into account that by 2060, the number of MPs Canada will require for its population will grow from 338 today to more than 460, if each one is to represent roughly the same number of people.

Officials have said the 30 seats added in 2015 filled up the available space, given the desks and seats MPs now get.

There are three options for renovating the chamber. Two would keep it in its existing space but use different furniture and configurations; one would require expanding the room inside the historic building.

Rob Wright, assistant deputy minister at Public Services and Procurement Canada, said the current chamber could hold about 420 MPs, but would likely mean the heritage wooden desks that seat MPs in pairs would have to be done away with in exchange for smaller seats, and maybe no desks at all. British MPs sit on long benches with no desks.

Expanding the chamber could increase capacity to more than 500 seats, using the existing heritage furniture, but would also cost a lot, he said.

Many MPs listening to the report were frustrated by a lack of detail about potential expenses. More than $770 million in contracts have already been awarded for the building, but there is no overall cost estimate yet.

"I find it kind of bizarre," said Conservative Saskatchewan MP Corey Tochor, comparing it to a homeowner being offered options for fixing their house but not being told what any of them will cost.

Wright, said there are a number of things holding back the cost estimates, including the fact that decisions about how Centre Block will be repaired have to be approved by multiple bodies, including both the House of Commons and the Senate.

That was not the case for the two dozen projects already completed as part of the overall renovations to the entire parliamentary district, said Wright.

About $3 billion has already been spent on Parliament Hill renovations over the last two decades, including $863 million for West Block, $425 million for the Wellington Building, and $269 million to build a temporary Senate chamber in an old railway station.

Parliament has approved $4.2 billion thus far for the complete overhaul of the district.

Wright also said while all the buildings on Parliament Hill have some heritage components, none of them are to the scale of Centre Block's.

"The House of Commons chamber is perhaps one of the highest heritage places in Canada," he said.

There is also "a tension" between the heritage of the building and its need to be functional and accessible, said Wright.

Wright said once the officials have met with the Senate and House of Commons committees and heard what parliamentarians want, it will be easier to come up with better cost estimates for approval.

The MPs on the committee received a tour of the construction underway last week. Most of the first year of work involved assessing the building to figure out exactly what work was needed and what kind of updates would be possible.

That assessment, which included logging more than 20,000 "heritage assets" like floorboards, chandeliers and plaster frescoes, is now complete. Pulling apart stones and taking down walls and ceilings led workers to find hidden gems like an order paper from April 6, 1920, as well as some old garbage like candy wrappers, trapped inside.